When the New York Rangers traded Brady Skjei, they did so with an eye on the future. Skjei’s $5.25 million cap hit may have posed a problem this offseason as the Blueshirts look to bolster the roster and/or extend some key RFAs. That is good planning. The downside is that it left a hole on the left side.

As discussed on the Live From The Blue Seats podcast on Monday, Skjei, no matter your personal opinion of him, was a minutes eater who had decent chemistry with Jacob Trouba on the top pair. It wasn’t perfect. They weren’t a league best top pair, but they got the job done, playing 20+ minutes a night. Since the trade, Skjei has been replaced by Brendan Smith. 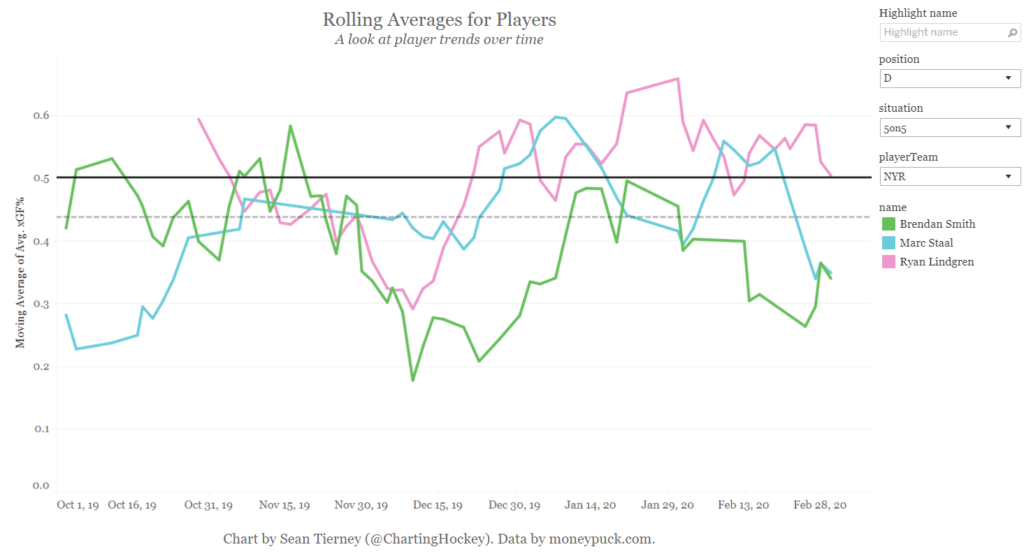 Suffice it to say, all three left defenders have been struggling. Only Ryan Lindgren is holding his own. Marc Staal has been bad, and the pairing with Tony DeAngelo isn’t saving him anymore. Brendan Smith only has a few games under his belt on defense, so most of his line can be ignored. Worth noting that he is trending up since the trade deadline.

So how do the Rangers optimize this disaster?

Change up the pairs

This is the easiest route to go. Clearly what the Rangers have now isn’t working anymore. While you can expect Lindgren to rebound based on his prior performance with Adam Fox, the other two pairs are suffering greatly. It’s a question about balance or top-heavy. At this juncture, given the depth and quality of their opponents going forward, depth may be the best option.

Lindgren, clearly the best LD right now, might be able to hold his own with Trouba on the top pair. If that’s the case, then maybe DeAngelo functions better with Smith on his side. Smith is clearly a better option than Staal.

That leaves Fox and Staal. Fox is the best defenseman on the team right now, so if there’s anyone that can carry Staal, it’s him.

Move a LD to the right side

I’ve been beating this drum all year. The purpose of moving someone to the left side is two-fold – it gets your better players more ice time, and it puts more offensive minded players in a better position to provide more offense. The forehand is in the middle of the ice, instead of up the boards, opening up sight lines and better passing angles.

There are really only two choices here, Fox or DeAngelo. Given Trouba’s propensity to stay at the blue line to unleash his slap shot, either one fits with him on the top pair. Trouba is also more likely to be back on defense, meaning he can likely cover a little bit if someone is caught. That is what brings me to DeAngelo. But again, either works here.

That would leave DeAngelo-Trouba, Staal-Fox, Lindgren-Smith for the time being. Of course, this is because you likely want to avoid a Staal-Smith pairing. Again, not perfect, but at the very least better than what has been out there the past two weeks.