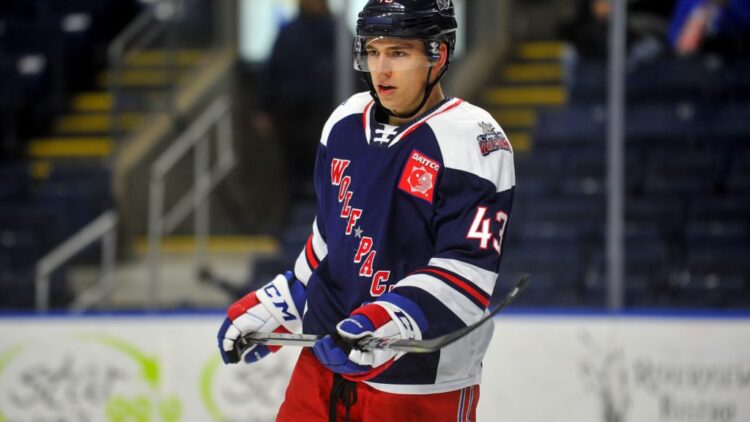 Hartford, CT, March 1, 2020 – A power-play goal by Brendan Gaunce early in the third period was the difference Sunday, in a 3-2 win by the Providence Bruins over the Hartford Wolf Pack at the XL Center.

The Wolf Pack concluded a weekend that had them playing three games in three days, going 1-2 during that time. “The guys worked really hard,” said Wolf Pack head coach Kris Knoblauch. “They could have phoned it in, with it being their third game in as many days, but they just don’t have any quit in them.”

Providence got on the board first when Oskar Steen scored his seventh goal of the year shorthanded 8:19 into the game. Trent Frederic and Josiah Didier assisted on the goal.

Shortly thereafter, Jack Studnicka would score to put the Bruins up 2-0 at 11:32. Cameron Hughes had the lone assist. “They got up 2-0 early, and we really knew we weren’t playing our best,” the Wolf Pack’s Tim Gettinger said. “They really took it to us in the first, we weren’t moving our feet. We had some chances later in the game, though.”

The second period seemed like it would be a stalemate, until Libor Hajek scored his first goal of the season with 11:56 left in middle frame, firing a laser past Max Lagace (21 saves). “Hajek had a great play there, moving up the ice, and it was a really good shot,” said Gettinger. That really helped to give us some energy and get back in it.” Vinni Lettieri had the lone assist.

With 5:55 left in the second period, Gettinger scored his 16th goal of the year, and his third in the last two games, to make it 2-2. Patrick Newell and Vincent LoVerde assisted on the tally.

Gettinger was quick to credit his teammates. “[LoVerde] made a great play to Patty, luckily I was able to put it in.” The goal would send the two teams into the second intermission tied.

The winning goal came 2:40 into the third, 17 seconds after Steven Fogarty was whistled for tripping. Studnicka moved the puck from the right-wing side, and Peter Cehlarik deflected it to Gaunce, who sent a low shot past Wolf Pack goaltender J-F Berube (23 saves).

The Pack would pull Berube in the dying minutes to try to get the equalizer, but to no avail. “They can’t all go our way,” said Knoblauch. “We gave ourselves an opportunity to get it to overtime at least, but we couldn’t make it happen.”

The Wolf Pack’s next action is back at the XL Center this Friday, March 6, a 7:15 tilt vs. the division-leading Hershey Bears. All Friday-night Wolf Pack home games feature $1 hot dogs and $2 beers through the start of the second period, presented by Nomads Adventure Quest.