On Yegor Rykov’s stint as a healthy scratch in Hartford 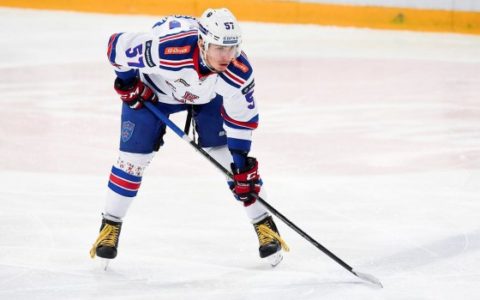 Hockey is like no other sport with prospects. Highly touted prospects are watched with great scrutiny from draft year through, hopefully, making it to the NHL. There can be years before even first round picks go from draft year to rookie season. Rebuilds are the same in this regard, with picks and prospects being shuffled around for rebuilding teams.

The Rangers are no different with their rebuild, with the 2018 and 2019 trade deadlines composed of big sell offs. In 2018, the Rangers sent Michael Grabner to the Devils for a draft pick and prospect Yegor Rykov, who was immediately regarded as one of the top defense prospects at that time. The 22 year old doesn’t score much, but his KHL career was followed closely as he was viewed as a player who could solidify the defensive aspect of the blue line for the Rangers.

When Rykov was signed to an NHL deal in the Spring of 2019, that scrutiny intensified. Unfortunately Rykov was injured in preseason and didn’t even make it to the AHL –he couldn’t be sent down until healthy– until halfway through the season. Rykov has a line of 2-9-11 in 26 games thus far. However, he’s been a healthy scratch for a while lately. I reached out to Ricky Milliner to see what the deal was.

“Rykov has been struggling,” Ricky noted. He did start off hot, but trailed off significantly of late. “It seems he’s still adjusting to North American ice and honestly can’t find his game. It seems to be the coaching staff is not happy with his play. He did have a minor injury lately as well.”

Despite the play lately, there is little cause for concern. The Hartford Wolf Pack are in a playoff spot, after all, and are more focused on winning than they are on player development. They need to dress the best possible roster as they gear up for the Calder Cup Playoffs.

There may be concerns about development timelines, since Rykov will be sitting for an extended period of time. However Milliner did put that concern to bed. “Let him adjust here this season then really let him start developing more next season,” since he’s not the only rookie defenseman struggling, most notably Libor Hajek.

The adjustment for Rykov appears to be more of a roadblock than for other prospects making the jump from the KHL to the NHL. There is no cause for concern. It is certainly worth monitoring. Rykov is still expected to be a part of the future for the Rangers blue line next season.