What did the Rangers get in Julien Gauthier? 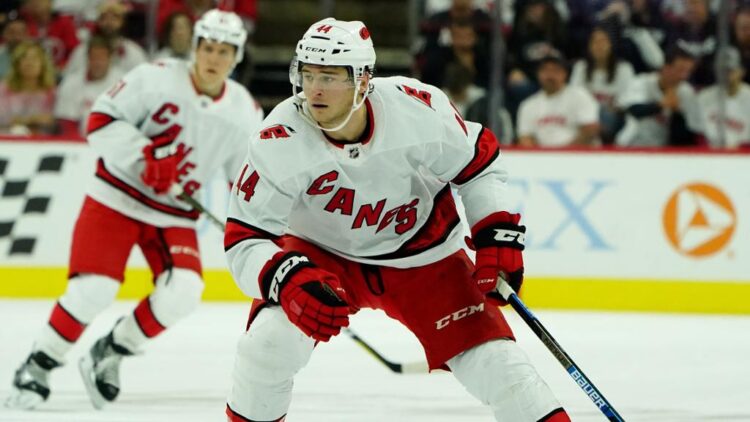 Disclaimer: I’m not a scout. I’m going off highlights I’ve Googled and what other people have said about him.

Julien Gauthier, who will likely make his Rangers debut tonight, was a surprise acquisition yesterday as the Rangers swapped Joey Keane for him with the Carolina Hurricanes. First billed as a prospect trade, it’s clear this isn’t necessarily about prospects, as Gauthier appears to be NHL ready. While that’s great, there’s always more to unpack.

Gauthier is a big boy at 6’4″ and 227 lbs, which will certainly make the old school folks very happy. For comparison’s sake, Chris Kreider is 6’3″ and 217 lbs. Since his draft year in 2019 (taken 21st overall), Gauthier has shown improvement across the board. He is in his third pro season. increasing his AHL stat line in each year. This season he has a line of 22-11-23 in 44 games, which puts him on an 82-game pace to beat his numbers last year (27-14-41). He has played five NHL games, notching an assist.

Gauthier isn’t just another big body, he has great breakaway speed, as seen by this highlight that made the rounds yesterday.

Julien Gauthier did THIS last night. He's 6'4 230lbs and he moves like that👀

CAR better find him a spot in the line-up next year. On pace for over 40 goals in the AHL. Reminds me a LOT of Denis Gurianov pic.twitter.com/iXwFzMDkDA

His stride is very smooth, and it almost looked effortless for him to get to top speed on that break. He also protected the puck from the back checker and used that to cross to the backhand, something that looked easy but was certainly not. Most players shoot off the forehand there. The kid has good hands.

Nicolas Roy and Julien Gauthier tag team for a beauty of a goal! #CalderCup pic.twitter.com/fFam5SDf7z

Part of that package is what we see here. That initial outlet pass to start the rush with Nicolas Roy was not an easy pass to make. But watch Gauthier’s path to the net. He recognized that Roy was drawing three guys to him, so he put himself in a position to receive the pass and he had an easy goal.

Brock McGinn scores another goal in Capital One Arena. This is created by… Julien Gauthier, who got the puck in deep and forced the turnover. McGinn got to his own rebound and got it by Samsonov. pic.twitter.com/HV70OH1Vw5

This is preseason, but it’s at the NHL level from this year. Gauthier is not afraid to use his size to get in on the forecheck and wreak havoc. It does take a specific skill set to get in deep that quickly and force the turnover, and not many players have it. If he’s reminding you of Kreider in this regard, then you’re correct.

From Dobber Prospects, Gauthier’s NHL certainty is an 8.5 (about 85%). They also rate his “Fantasy Upside” as a 7.0, which based on their scale means he could possibly peak at 70 points. I think that’s a tall order for a 22 year old and sets unrealistic expectations, but he certainly has the skill set to hit that if in the right situation and his continued development goes as planned. Not all players hit that ceiling.

What will help him hit that ceiling is his net-front presence. Naturally he’s difficult to move off a screen, he’s big and –more importantly– strong. He’s more than wiling to get to the front of the net and put a stick on the puck while there too. He also has a very dangerous shot.

Thanks for helping us win a Cup

Thanks for 69 goals in a Checkers sweater, the 3rd most in franchise history

Thanks for making it rain men at the Coliseum

That shot he puts top corner while off balance (12-13 seconds into the video) is a thing of beauty. The video also has multiple goals against Igor Shesterkin, which bodes well for his goal scoring ability at the NHL level.

Willingness to get to high-percentage areas, a lethal shot, hockey IQ, and breakaway speed are four major traits that lead to future NHL success. It’s going to be a bumpy road. He’s going to make mistakes. But Gauthier looks like he is the real deal and will help solidify the middle-six in the future.