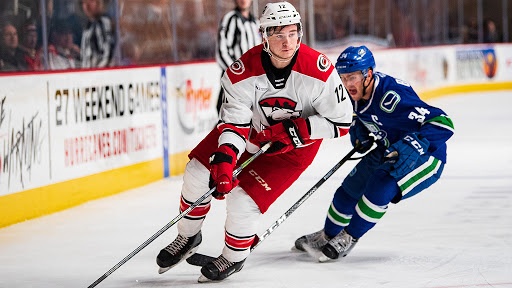 In a bit of a surprising move, the Rangers have traded defense prospect Joey Keane –their AHL All Star and leading defense scorer in the AHL– to the Carolina Hurricanes for RW Julien Gauthier, a former first round pick of the Canes from 2016.

Keane, a 2018 3rd rounder, burst onto the scene this season with a superb rookie campaign with the Hartford Wolf Pack. Keane has a line of 8-22-30 in 49 games with the Pack, and was their first call up for injury this month, although he didn’t actually play.

Gauthier, the 21st overall pick in 2016, has a line of 26-11-37 in 44 games with Hartford this season. The 22 year old RW is in his third full AHL season, showing significant improvement in each season. The scouting report on Gauthier is that he is big (6’5″, 220 lbs) and fast, and a tremendous net front presence. He is also a very smart hockey player who plays in all situations.

This looks like a swap of prospects from positions of strength for prospects in positions of weakness. The Blueshirts are loaded on the right side of the blue line, but are a little weak up front. I don’t know much about the Carolina prospect system, but they are loaded at the NHL level at RW.

Gauthier surely looks like a Chris Kreider-lite to me. This move has me intrigued.