Over the past two months, Larry Brooks has been pushing that the Rangers should be pursuing a trade with Columbus for Josh Anderson. In a vacuum, that’s fine. Anderson is a decent middle-six power forward (or a good bottom-six) who has been improving every year. At least until this year. This year he has a line of 1-3-4 in 26 games while spending the majority of the season injured. There’s a chance he could be a prime buy-low candidate.

The Rangers and Chris Kreider are “working on a new deal,” but we’ve seen this story before with Mats Zuccarello and Kevin Hayes. It’s more than likely a trade is coming, even with the current win streak potentially altering fan perception of their plan. Kreider is currently the top trade target, something the Rangers haven’t had at the deadline. The price, given what the Lightning gave up for Blake Coleman, could be big.

Which brings us back to Anderson. A fine player on his own, Anderson will be 26 years old in May. Not exactly the prime target for the best player available at the trade deadline. A Kreider/Anderson swap would be a major loss for the Rangers, as they would be able to fetch a far better package from another team. The only “need” that Anderson fills is that he’s an NHL ready player at a position of need (RW). There is no other legitimate reason to consider the swap, which makes it a non-starter. 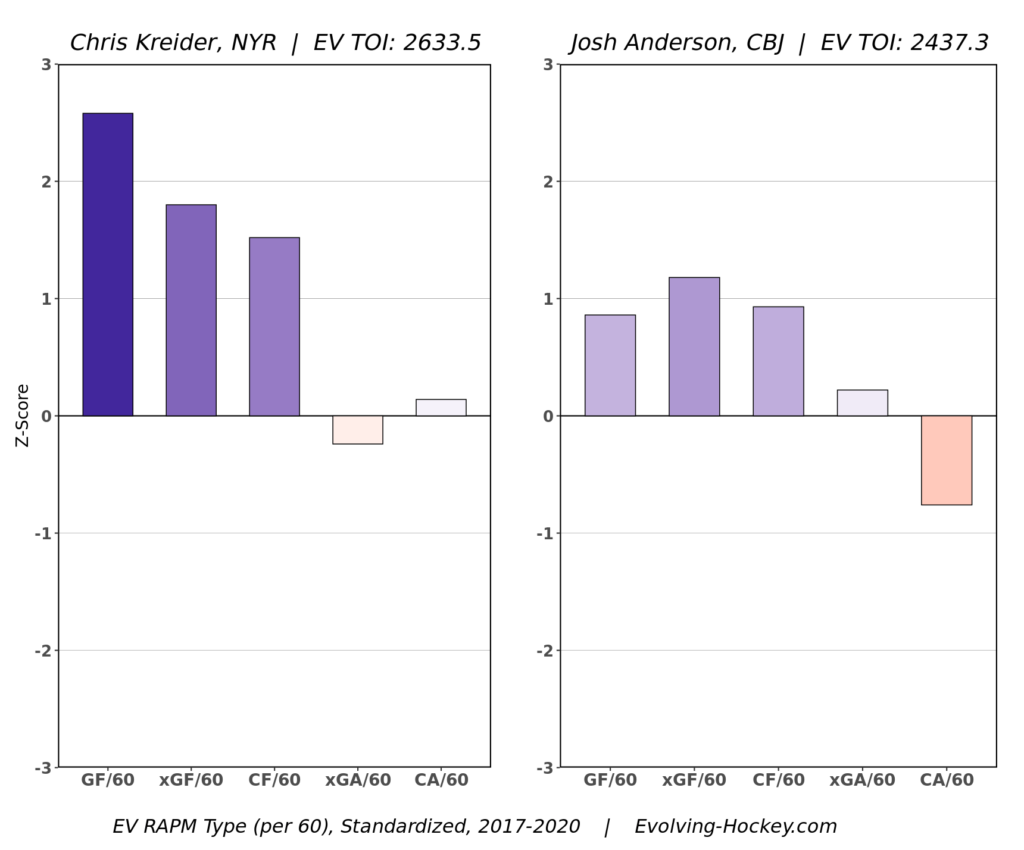 Even the cap argument is silly, since you’re getting a far worse offensive player who is only marginally better, if that, defensively. And keep in mind the defensive numbers for Kreider are from the past three seasons, when the Rangers have been a relative train wreck in their own end. If you’re looking at Anderson as a poor man’s Kreider, then you get what you pay for. One is not a replacement for the other. This is all about asset management.

This doesn’t mean the Rangers shouldn’t look into Anderson in a separate deal. It just means there are other methods of acquiring him, if he is indeed a target. Trading your best trade chip for a 26 year old middle/bottom-six winger isn’t that deal. The name of the game in a rebuild is asset valuation, and the Rangers would be doing themselves a disservice by trading Kreider for Anderson.