For the last 15 years – and actually a majority of the franchise’s history, dating back to Gump Worsley in the 1950’s and 60’s – the Rangers haven’t had to worry about goaltending. Henrik Lundqvist assumed the spotlight in 2005 and presided over an era of sustained success matched only by the revered Rangers of the 1970’s. Indeed, Lundqvist frequently propelled mediocre teams to heights they wouldn’t have otherwise reached. His statistics, both traditional and advanced, tell that story.

Unfortunately, Father Time is undefeated. That’s why we’ve seen the rather awkward transfer of power from the unquestioned starter just a few years ago (Lundqvist routinely played 55-60 games per season for much of his career) to the current three-way timeshare between Lundqvist, Alexandar Georgiev and Igor Shesterkin. It’s a foregone conclusion that Shesterkin will assume the starting role, and given David Quinn’s post-game comments from last Sunday, perhaps he already has.

In the midst of this goalie transition, the Rangers began to play significantly better hockey as a team. Our own Rob Luker has detailed the turnaround, and pinpointed that it started right around the 30th game of the season: December 10 vs. the LA Kings. Sean Tierney (@ChartingHockey on Twitter) has illustrated this as well, in his daily charts that now focus on trends covering the last 25 games. The Cliff Notes version is this: the Rangers are playing better defensively (conceding fewer shots and scoring chances), while shooting more frequently themselves and not sacrificing quality. Unfortunately, this improved play has not resulted in a better record. The Blueshirts are 12-12-1 in their last 25 games after going 15-11-3 in their first 29.

In recent years, the Rangers have relied heavily on elite goaltending and well above-average shooting to succeed. In the last 25 games, their shooting percentage has regressed, but not dramatically. For the full season, the Rangers are shooting 10.56% (all situations), good for 5th in the league. In the last 25 games, that percentage has fallen to 9.9% which is 15th. That’s a slight regression, not an epic shooting slump. Shooting 9.9% while playing decent defense should add up to better results than just 12 wins in 25 games.

So is goaltending to blame? Well, it’s complicated. At a team level, the Rangers’ save percentage is 90.64% for the season, 14th in the NHL. That’s above average, though barely. Over the last 25 games, that number has slipped to 89.69%, which is 22nd in the NHL over that two month span. Again, this coincides with a period where the Rangers are playing better defensively, allowing fewer scoring chances. This is a red flag, and something I decided to take a closer look at.

A couple of weeks ago, Shayna Goldman over at The Athletic did a fantastic deep dive into the Rangers’ three goalie rotation (subscription required). In one section of that article, Shayna went game-by-game through a 9 game stretch encompassing January 2-21 and attempted to classify each goalie appearance as a “quality start,” and assess if any of the wins could be considered a “steal” by the netminder. She was nice enough to share with me the basis of her work, as well as the definitions she used for these two terms. She referenced SB Nation’s Alan Wells, who originally published his work over on Raw Charge (forgive me, it’s a Lightning blog), who defined the two terms as such:

I decided to extrapolate Shayna’s analysis over the full 25-game stretch that coincides with the Rangers’ overall improved play. Oddly enough, that stretch began and ended with games against the Kings (December 10 through February 9) and covers exactly two months. I used game logs and expected goals data from Evolving-Hockey (all situations, empty-net goals omitted). Here are the results.

The King started 9 games in this span, winning 3 and losing 6 (once in a shootout). He delivered 5 quality starts and 1 steal (his brilliant 1-0 shutout of the Red Wings). His best performance was the steal and shutout of Detroit, where he saved an absurd 3.29 goals above expected. That was also the Rangers’ only shutout during this span. His worst performance was on January 11 vs. St. Louis, where he allowed 5 goals against an expected total of 2.65. He was also poor against the Flyers, conceding 5 goals against an expected 3.08 in that game. Lundqvist was pulled once, after two periods in a 5-3 loss to Dallas.

Georgiev made 10 starts, going 4-6 during the span. He delivered 4 quality starts and 1 steal. His best performance was the 3-2 win over the Islanders on January 16th. The Isles’ expected goal total for that game was 4.95 but they only scored 2 goals due to Georgiev’s heroics. However, the Bulgarian had a rough stretch from late December through early January where he posted just one quality start in six appearances from December 12 through January 4. He was pulled in the 7-5 loss to Edmonton on New Year’s Eve.

Shesterkin has started 6 games since his call-up on January 7, posting a 5-1 record. He’s delivered 2 quality starts and 2 steals, coming in his most recent outings against the Maple Leafs and Kings. The Kings game was Shesterkin’s first true virtuoso performance, as he stonewalled LA to the tune of 2.8 goals saved above expected. Shesterkin’s worst performance by these measures was actually a 4-2 win over Detroit. In that game, Detroit’s xG total was 1.19, but the Wings scored twice on The Czar.

Rangers goaltending has posted 11 quality starts and 4 steals in 25 games. That’s a quality start percentage (QS%) of 44% and a steal percentage of 16%. How does that compare to the rest of the league? While I don’t have data specific to the entire NHL over the course of this exact two month stretch, let’s refer back to Alan Wells’ article, where he posted this chart. 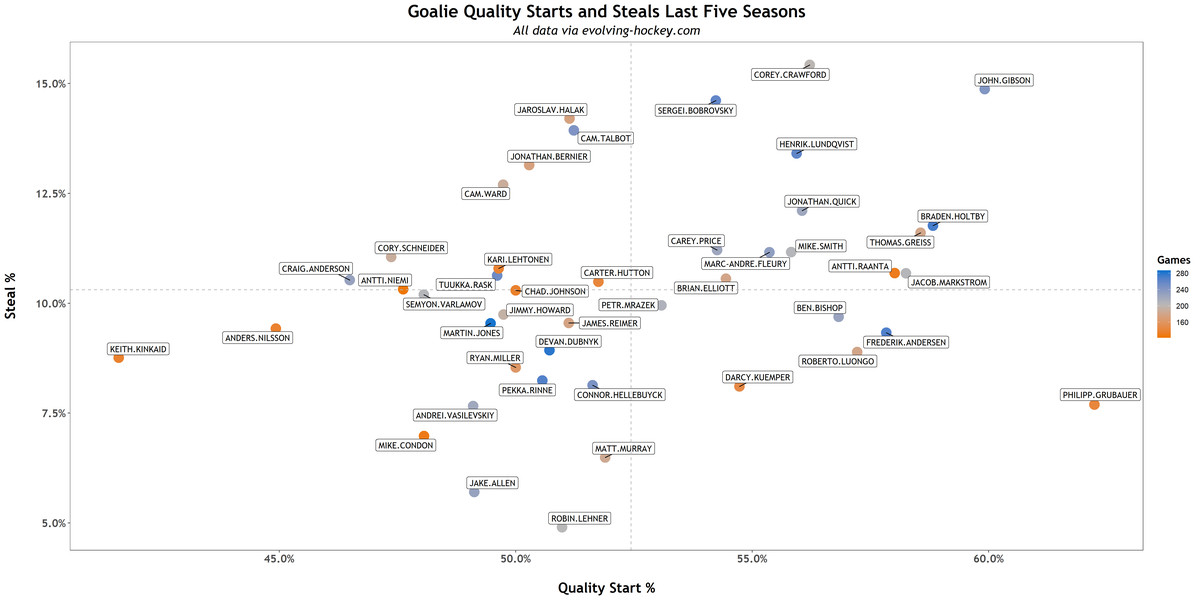 This chart plots the top 45 goalies in terms of games played over the last five seasons, dating back to 2015-16. You can see Henrik Lundqvist in the top right hand corner of the chart. While I don’t have the exact data, it looks like Lundqvist’s QS% dating back to 2015-16 is about 56%, compared to a rough league average of 52.5%. In terms of steals, Hank’s percentage is about 13%, while the league average sits at just a shade over 10%.

Using these league average benchmarks, it’s fair to characterize the Rangers’ goaltending of late as inconsistent. When your goaltenders are only turning in a quality start 44% of the time, that’s downright bad. However, the peaks have been very high, with each goalie legitimately stealing a win at least once in the past month.

After Sunday’s game, podcast guest and friend of the blog Vince Mercogliano tweeted this:

Remind me which game they lost because of goaltending? I highly doubt you could find enough to get them into a playoff spot. https://t.co/6ZPHTBEnRj

While I understand Vince’s argument, it’s still fair to say that after looking at this data closely, the Rangers have been left out to dry by their goaltending at times over the last two months. There was a particularly brutal 10 game stretch starting on December 23 in Philadelphia where the Rangers got just 2 quality starts from their goalies. That Flyers game is one in particular that stands out where the Blueshirts probably deserved a better fate (Carter Hart had something to do with that as well). Ditto the games against Edmonton (Georgiev allowed 6 goals on 24 shots) and St. Louis (the aforementioned Lundqvist clunker, where he posted a -2.35 GSAx).

Boiling all these numbers down, a few things become clear.

The Rangers playoff hopes for this season are a long shot at this point, but improved play from their goaltenders (provided everything else stays consistent, of course) will likely lead to more wins. At this point, the Rangers should install Shesterkin as the clear number 1, with Lundqvist backing up every night and starting once or twice a week.

How’s that trade market for Georgiev looking? If the Rangers have an offer on the table, they should pull the trigger soon.