From the ten-thousand foot view, the performance of this New York Rangers defensive group has been historically poor. Even on the nights where it’s seemingly not entirely out of control, there are moments where shots and chances are given up that make someone watching wonder if that particular defensemen (because they’re all to blame to an extent, this year) has ever played the position in an NHL game before.

With that negativity out of the way, it has been better lately as of this writing (TUE 1/7)! And while a degree of it is certainly the establishment of the centers (Zibanejad-Strome-Chytil) for the forwards, the surprisingly stable and better play of Ryan Lindgren and Marc Staal has turned a historically bad group into a league average one. When that happens, the young and promising NYR forwards can suddenly run with almost anyone.

Alas, we must consider more than just the last 5 to 10 games played for the Rangers. Instead of posting specific charts about each player, I’m only going to post two at the beginning that best capture the high-level impact of each player in two different ways. You may have to do some scrolling back up, is all. 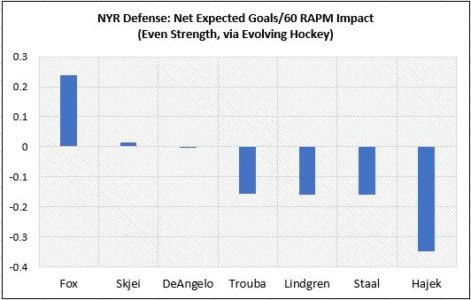 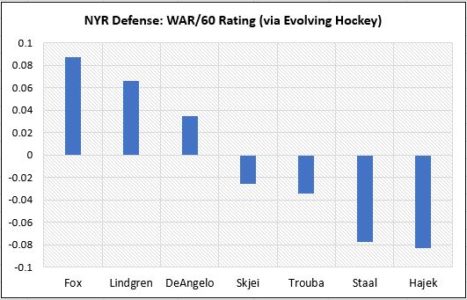 The below is in order of Even-Strength TOI…

If you found this blog post and expected the grades to be weighted against the players cap hit, you may not entirely agree with my assessments (as the cap hit is technically a sunk cost in an economics sense, it was signed before this season’s play). Anyway, Trouba has been a mixed bag this season because while he has had a positive offensive impact at 5v5 and on the Power Play, he spent the first 20 games of the season lugging around rookie deadweight Libor Hajek. In the last 20, he’s been paired with Skjei and they’ve been just around league average in shots and chances, as opposed to being sub-40% with Hajek. I’m not giving Trouba a full pass, as there needs to be another level to his game during his TOI for him to really shine for NYR, but Hajek’s influence cannot be ignored. Grade: B

Let’s get the bad out of the way: Brady Skjei has never really been, nor will he every likely be, a net positive impact when it comes to defending without the puck at the NHL level. His bad plays look real bad, full stop. That being said, Skjei also makes a lot of routine and not-so-routine plays (especially with the puck) look extremely easy because of his skating ability. He’s been undoubtedly good this season at generating shots and scoring chances. During is ~15 game run when paired with DeAngelo, they managed to out-gun the opposition to be on the positive side of the shot and chance share – a difficult feat seeing as how much NYR was giving up on a nightly basis. While the boxcar stats might not be fully there yet, he’s showing signs of the 22 year old we were all so excited for in the pre-Ruff days of 16-17. Grade: B

Another tale of two halves, DeAngelo went from being a part of NYR’s best pair to date with Skjei to having to cover for Hajek and Staal. It started out much like last season for Tony with Staal, as very few defensemen in the league could cover up for Marc, however in the last 5-10 it must be noted that he’s been generating a lot of offense and Staal has been able to not be a liability (for the most part). They’ve settled into second pair minutes – let’s just hope it keeps working. No one has ever questioned DeAngelo’s offensive ability, as he’s on pace for a career high 58 points. As long as he out-generates the other team in terms of shots and chances, I’m ok with keeping Benoit Allaire a busy man. Grade: B+

Adam Fox, individually, has arguably been the Rangers best defensemen of the season. Now, when you factor in that he typically sees second or third pair TOI, it could be argued that expectations should be measured. But then, we also finally remember that Fox is a 21 year old rookie paired with Ryan Lindgren who, on the season, is seeing the opposite impact effects even though they’re both on the ice together for most of the time. No need to drag this on further, except to say this: it is fitting that Fox has the 4th most TOI of NYR D-men at even strength, because himself and the three above are the four best. Grade: A

For Lindgren, his grade all comes down to relativity. Relative to the four defensemen listed above, Lindgren has not been as positive of an impact in his lower TOI. That said, relative to the other two LHD options that have yet to be mentioned in this analysis, he has at least shown some value at the NHL level in a limited role, especially in the last ~10 GP at EV and on the PK (his defensive impacts are league average, which for this NYR team is welcomed). His WAR/60 rating above is second because he has the 2nd highest on-ice shooting percentage behind Artemi Panarin, so we can likely expect that to drop by later this season or into next. In the end, his grade is more of a reflection of being the weaker half of a decent pair with Fox, but I could see him having a low-TOI future with NYR. Grade: C+

Remember the scene in Moneyball when Billy Beane asks Ron Washington what he thinks about putting Scott Hatteberg at first base? “The polite way to put it is that he lacks confidence.” Look, Hajek is 21 and has played 58 AHL and 32 NHL games, total. His 5 GP last year were with Neal Pionk and then he was thrown to the top-pair TOI wolves with Trouba and it became quickly apparent he was not ready for it. With Staal back and the team playing better as a whole, it would likely be best for him to go back to Hartford and gain some confidence back in hopes he can be a lower-pair TOI impact player with NYR. As with Lindgren, his grade reflects his results, not necessarily his future. Grade: D

Look, we all know who Marc Staal is at this point. He looks slow, he doesn’t neccesarily make any interesting plays with the puck, and yet because of his overall service to NYR no voice associated with them (or near them, aka writers with access) would dare say the game has passed him by (even though it did anywhere between three and five years ago). That all being said, if he can be anywhere near an even shot and chance player while watching DeAngelo run around the ice and generate offense, I think that’s the best we can hope for. Grade: D+ 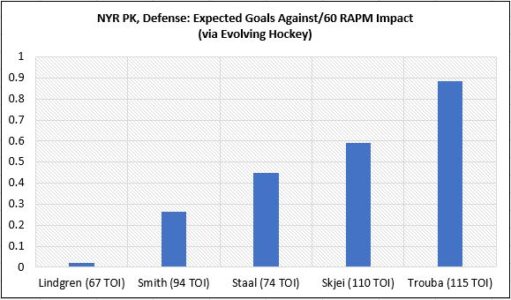 Brendan Smith should not be playing a bottom-six role as a forward for the New York Rangers in the year 2020. Inexplicably, David Quinn and Lindy Ruff (and maybe Gorton) do not trust him to play defense at even strength, but they will task him with playing Right Defense on the Penalty Kill. During these PK situations, less shots have been coming from his quadrant of the ice (box or diamond, aka the right circle) and overall his xGA/60 results rank 2nd best with the 3rd most TOI. Overall, I’d be willing to bet Smith would have a slightly better impact than Lindgren/Staal/Hajek as a lower-TOI D-man, but what do I know? Grade (Penalty Kill only): B

Have at it in the comments, and here’s to Igor and the “new look” NYR actually hanging with the Avalanche on Tuesday night.