It’s time to re-evaluate the defense, apparently. Starting yesterday with Jacob Trouba and his adjustment to New York, his new/old defense partner Brady Skjei is also starting to finally come around. Skjei has been the target of a lot of well deserved criticism, as his play has never matched his rookie season. Currently in the second year of his six-year, $5.25 million deal, Skjei’s performance is under a microscope as Seattle expansion looms.

Skjei, who is also just 25 years old, has up 5-11-16 in 35 games this year, which puts him on pace for 12-25-37 over a full 82 games. What’s interesting is that none of this is coming on the powerplay. Skjei’s most common partner has been Trouba by about 100 minutes, but he’s seen a good amount of time with Tony DeAngelo (184 minutes) as well. Skjei’s been driving significant offense this season, but like Trouba, his defensive numbers are lagging behind a bit:

While the defensive numbers look rough, it’s worth noting all of his numbers are better than they were last season, and he’s showing signs of life.

I feel like Brady Skjei is a low-key fulcrum point for NYR fans. That said, he's back to being a positive impact this year, helping generate offense regardless of partner and while the defense isn't good, it isn't bad either.

He seems to finally be handling his higher TOI. pic.twitter.com/YacYiYHq8n

Rob broke this down nicely, looking at how Skjei is performing from year to year. It’s clear this season is better than the rest, and it’s not just the stats showing it. Perhaps it’s because he has Trouba here. Or perhaps he doesn’t necessarily have the weight of being the key focus on the blue line. Or, more likely, it’s just a level of maturity. 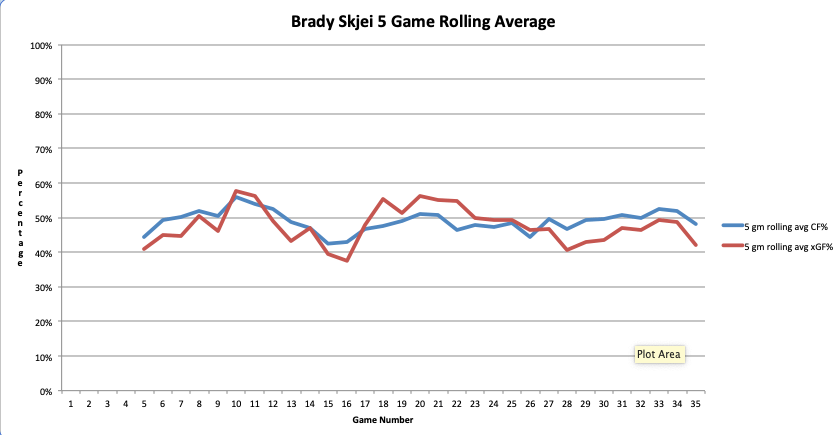 For this season, Skjei had a big dip after game 10, recovered for the most part, but has been hovering around 45-50% xGF% and 48-52% CF%. Less of a recovery/adjustment period for Skjei, and more balanced and good –comparatively to the rest of the team– performance this season.

Very few people will be disappointed if Skjei performs like this. Dare I say, he might “earn the contract,” which is a popular phrase online. This uptick in performance is nice to see through 35 games, now it’s a matter of keeping it up. Like Trouba.