Alex Georgiev will start in net for the Rangers tonight, which will be his sixth start in the last eight games*. Larry Brooks mentioned in his column yesterday that this is an organic changing of the guard, as the Rangers have fared better with Georgiev in net, and Georgiev himself is coming off a recent stellar run, where he went 3-1-0 with two shutouts and a .974 SV%. That run was spectacular.

*It is worth noting that the Rangers themselves said Hank was sick last week, so Georgiev made extra starts. Just food for thought.

On the flip side of things, Lundqvist doesn’t have those stellar games that Georgiev had. No shutouts since forever, more losses, and a .912 SV% for the season compared to Georgiev’s .920 SV%. The traditional numbers favor Georgiev, so he gets the starts. 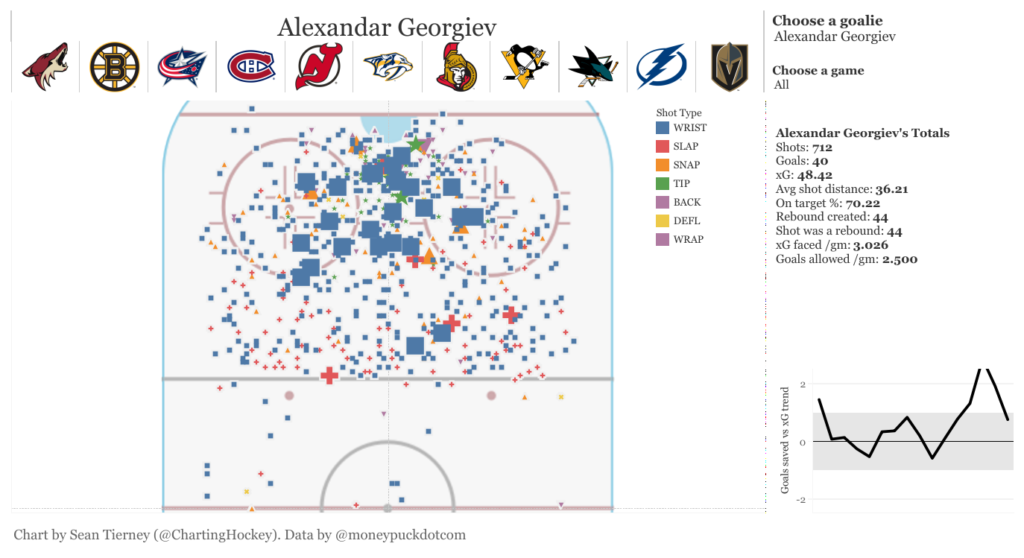 When looking at Georgiev’s numbers, his expected goals faced per game is a shade over 3.0, and he’s allowed just 2.3. This is very good, especially with the average shot distance of 36.21 feet. That’s pretty in close, and we know how the Rangers like to give up both quality and quantity against. 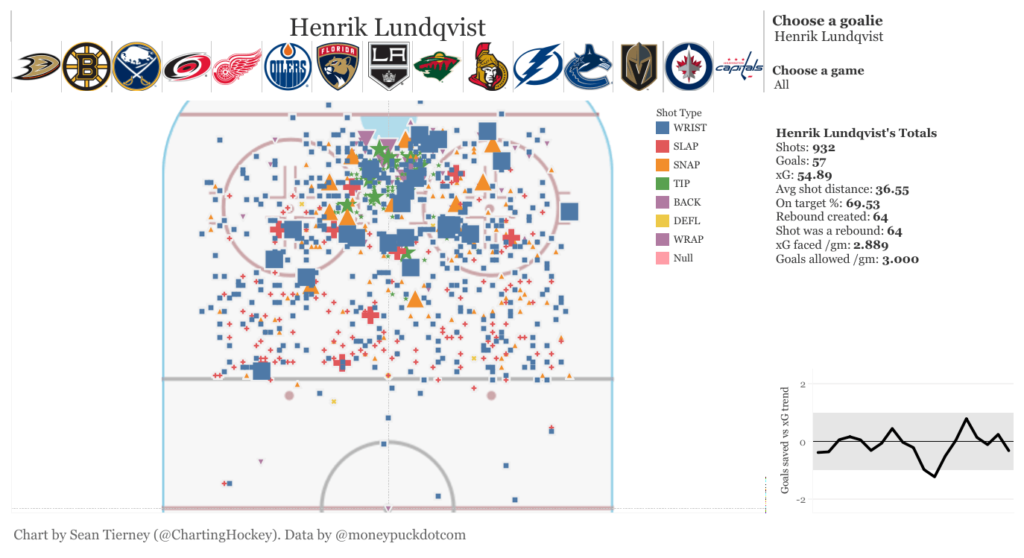 We now flip to Lundqvist, who faces an xG/game of 2.889, less than Georgiev, and allows 3.0 per game, more than Georgiev. The shot distance difference is negligible. Lundqvist hasn’t been bad, per se, but Georgiev has simply been better by both traditional and more nuanced stats.

There is some noise in some of these stats, since both are still under 20 games played (Georgiev 19, Hank 16), but that doesn’t take away from the fact that Georgiev has simply been better. It also doesn’t take away from the fact that despite the lesser numbers, Lundqvist hasn’t exactly been bad either. He’s just been average while Georgiev has been great. That’s key here. At least according to what was presented above. But here’s a counterpoint:

NYI has the best goaltending duo (again!), WPG's been great (almost entirely Hellebuyck), and ARI, NYR, and DAL get strong work above expectation too.

DET, SJS, and MIN are being sunk by goaltending <this is a recording>. pic.twitter.com/CWwgsKesre

The counterpoint, goals saved above expectations, takes the full quality and quantity of workload a goalie takes, compares to the results, and shows who is  Sean Tierney here lists tandems, in which the Rangers rank fourth in the league in goaltending. That shouldn’t surprise anyone. What should surprise people is that Lundqvist is making more difficult saves. We see this in the comparison in the full thread from Sean.

So what does all this mean?

It’s not a simple answer of “Georgiev has been better.” This is a grey area for the Rangers at a position they haven’t needed to look in 14 years. Here’s what we know:

There was never going to be a proverbial ripping of the band-aid for the goaltending change. As long as Lundqvist is average or better, he will continue to get starts. It was always going to be a slower transition.

A changing of the guard is coming, but whether this is the actual changing of the guard is still to be seen. Igor Shesterkin has been pegged as the heir, but Georgiev is very quickly changing minds. Lundqvist only has one year left on his current deal, and it is more likely than not he becomes the full time backup before the contract is up. That may be before this season ends as well. He’s already at a 50/50 split, with each passing day leading to fewer starts.