With the NHL season just over a third of the way complete for most teams, analytically-inclined organizations will begin to draw from the sample size seen of most players to consider lineup and roster tweaks (or to stay the course) heading into the new year. At the very least, splits can be monitored to see which teams and players are improving or declining compared to the start of the season, which can also help contribute to decisions. The Rangers should be no different, however the challenge may be to find the positives in what is tracking to be a historically bad team with good goaltending and shooting. 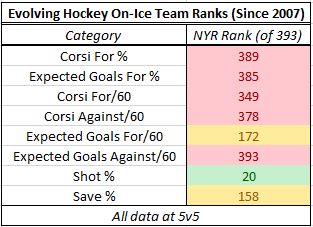 Yes, for the most part this season the Rangers have been Sabres-tanking levels of bad (hence the red) when you separate how the team is consistently getting out shot and scoring-chanced compared to what actually goes in either net. That being said, the season has been split in two when you start to look at the game by game shot and chance results. For games 1-9 and 22-30 (8-8-2 record), the Rangers posted a 42.4% Corsi for (shot attempts) and a 40.7% Expected Goals for rate (quality of shots) at 5v5. To put it bluntly: this is very bad.

On the positive side, however, games 10 through 21 resulted in an uptick: NYR posted a 43.6% Corsi for and 46.4% Expected Goals for rating. While this is still not “actually good” results for an NHL team, the Rangers put up a 7-4-1 record during the stretch because of their very much above-average goaltending that has been the norm for longer than a decade. By just staying in games and more evenly trading shots and chances, the Rangers beat some legitimate contenders.

During games 10 through 21, there were two key lineup decisions that helped influence the better results. First, Quinn and Oliver put together a line of Kreider-Chytil-Buchnevich and consistently used them in the top six. Of all NYR forward lines so far this year with at least 50 TOI (5-6 GP) TOI together, this line is the only one to have consistently out shot and chanced their opponent. While they were broken up for game 20 (4-1 Loss at Ottawa), they were reunited in game 21 (6-5 win at Montreal), only to be abandoned since then. 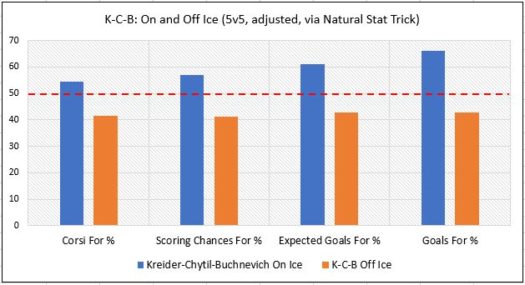 Also during this stretch of 12 games, Skjei-DeAngelo were paired together and produced fine results compared to the rest of the defense (while playing top 4 or top pair minutes). Breaking even in shots and chances in this defensive scheme of Lindy Ruff is an accomplishment, and they did just that. Quinn and Ruff broke up the pair after the Ottawa loss, and we haven’t seen them back together since. The performance of the defensive group as a whole has simply not been good in the last ten games.

This is all to say that while the Rangers have been winning on the backs of their goaltenders and timely shooting (which is volatile by nature, as all shooters are streaky), NYR does have some options to consider if they were to influence the lines by shot and chance results. Here’s how it could look for the forwards:

While more TOI is needed to fully know, the results of Panarin-Zibanejad-Kakko are somewhat encouraging for two reasons. First, they’re playing top-line minutes and on Tuesday against the Kings they posted their best game yet (62% Corsi, 62% expected goals) against a team that is performing better than most think. Secondly, we know from results that the bottom six isn’t where Kakko will thrive, so putting him with legitimate top-line NHL talent for a bit could spark him. 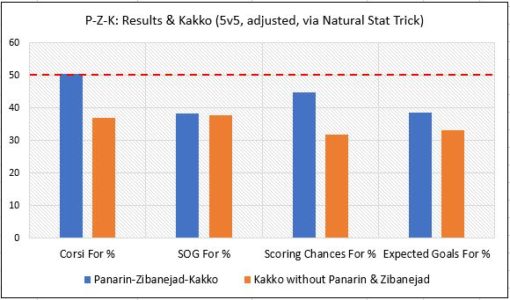 For the first time all year, Kakko is breaking even in on-ice shot share and he’s seen a creep up in scoring chances and expected goals. If the line can turn more shots into chances, I’d be very excited to see the top six I laid out above get the heavy minutes. Also, of note, Strome dropping to the 3C could possibly help spark the bottom six offense a bit (which is non-existent). I put Fast on the RW because he is once again an effective two-way player, while Howden drops to the fourth line winger (seeing as he’ll never be sent down, no matter what he does (aka doesn’t) do). Ahh, yes, Smith is not in the forward lineup, so speaking of the defense…

Two off-hand pairs?! Yes, because of one simple question: can the defense actually get any worse? I think we can all agree that Fox has proven he can play, so I wouldn’t even hesitate to try him on his off-hand with Trouba. Reuniting Skjei-DeAngelo is key, as they’ve proved they can deliver results. Dropping Smith back actually allows him to contribute as he isn’t any worse than Staal or Lindgren (and he can’t create offense for anything up front). In the end, the beauty of the above pair setup is that it allows the actual top-4 defenders on the NYR roster to be in the top four.

Now, only Skjei-Trouba and Skjei-DeAngelo have >100 TOI here (aka sample size warning), but just look at the difference between when any combo of the four best NYR D are on the ice versus the others.

Look, most of this is an absolute pipe dream because it would require Quinn & co. to think outside of the box for more than half a second. Would the Rangers be “actually good” as a result of this? Probably not. Could the Rangers be incrementally better and maybe win more games than lose in the process with a young core? I’d bet on it with that top six and top four, yeah. The point here is not to try to magically believe this is a Stanley cup team, but rather to show the core that the organization meant this year to not be a complete joke when they went out and got Trouba and Panarin.

Oh, and if NYR is going to get top ten goaltending and shooting for another year, why not lean on certain lines and pairs that showed good results?