Anthony DeAngelo shouldn’t be part of the future 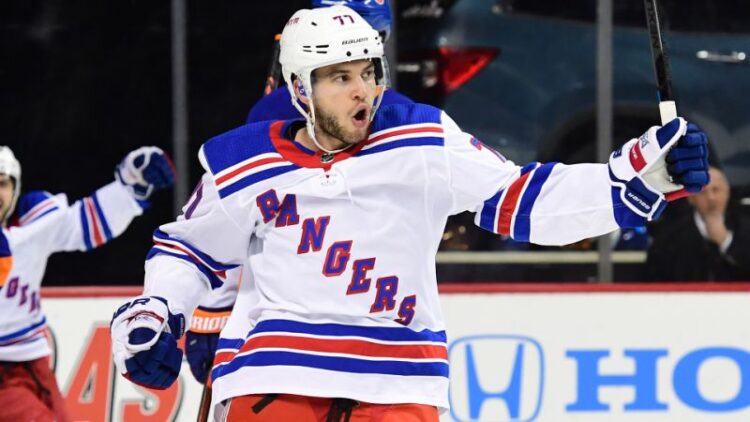 Back in 2017, the Rangers faced a decision on Derek Stepan.  While a productive player on Broadway, he was a divisive presence, with some asserting he didn’t put up enough points or provide enough jam down the middle for the money he was making.  His NMC was going to kick in after the Draft, so if the Rangers were going to move him, the time had come.  There were rumors the Rangers were after Elias Pettersson (seriously, how can you not swindle Jim Benning), but were unsuccessful in prying loose the No. 5 pick.

Ultimately, (as far as we know) the best deal on the table was from the Coyotes, with an offer of the number 7 overall pick and a young, high-upside defender named Anthony DeAngelo for Stepan and backup goaltender Antti Raanta. The deal was criticized at the time and rightfully so, it was a light return for a proven top 6 center and at worst, a rock-solid platoon netminder.

As we all know, the Rangers ultimately drafted Lias Andersson with that 7th overall pick.  Analysis of that selection is a discussion for another time, but so far, most of the best picks from that Draft came before Andersson.  The wild card in the deal was DeAngelo, a New Jersey native, who possessed sky-high offensive upside with defensive question marks and some alarming behavioral issues early in his career.

The Rangers banked on the upside and hopeful maturation of a young player and have used his development to create some positive value back in that trade.  DeAngelo has blossomed offensively in New York and provided a dangerous offensive element to the blue line.  Unfortunately, DeAngelo should not be considered a part of the long-term future of the rebuild.   Let’s break down why…

Madison Square Garden is littered with the remains of high-end offensive defensemen with serious defensive flaws that were unceremoniously shipped or let walk; Keith Yandle, Kevin Shattenkirk, Dan Boyle, Michael Del Zotto, etc., and that is just in the past few years.  Ranger fans think they want the puck moving powerplay quarterback, but time and time again, the lack of defensive ability ultimately torches that player’s good will with the fan base and they ultimately exit.

Make no mistake, DeAngelo is the most extreme example of this.  His defensive ability is almost non-existent, and his offense has carried him through the entirety of his tenure in New York.  The defense is currently a tire fire, so there is not a lot of spotlight on these issues, but once it returns to respectability, fans are going to turn.

DeAngelo recently turned 24 and is playing out the last year of non-arbitration eligibility.  He will have those rights next year and was reportedly unhappy about playing on a $925k contract after a solid season last year.  He will undoubtedly be looking for a raise.

Additionally, you lose about $2.5m off of the buy-out hit for Dan Girardi but give back $4.5 in the Shattenkirk increase.  The net salary loss going into next season is about $4.5 million, while needing to replace Kreider and Fast and owing raises to or replacing Brendan Lemieux and Ryan Strome.   This doesn’t leave a ton of room for DeAngelo’s presumed demands.

From a purely offensive perspective, DeAngelo is having another fine season.  He has 19 points in 26 games and has taken notable steps forward in patience and poise in the offensive zone.  He obviously gives quite a bit back defensively, as his +/- is 0 even with all that production. 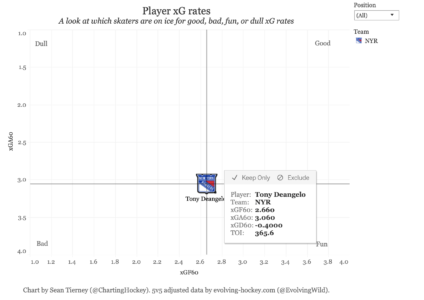 Now, we all know that +/- is a borderline useless stat, at best, so let’s dig a little deeper.  Looking at the advanced statistics that DeAngelo seems to enjoy deriding, his xGF (expected goals for/60) is underwater by almost half a goal per 60, as you can see from the above chart.  He is giving all that offense right back in his own zone. 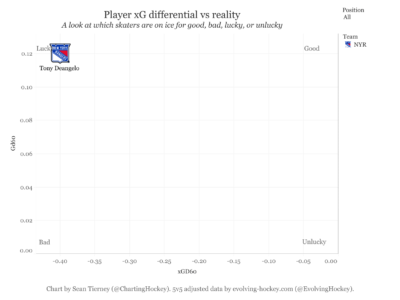 Staying on the theme of advanced stats, they tend to show that even part of his offense is a mirage.  The above chart is almost comical in its exaggeration of DeAngelo’s expected goal differential v. reality.  Coincidentally, DeAngelo personally came after our own Rob Luker before Thanksgiving for pointing out Ryan Strome’s massive discrepancy in shooting percentage since joining New York, but those who live in glass houses shouldn’t throw stones.  DeAngelo’s career shooting percentage is 5.6%.   This season: 14.3%.  Regression is likely coming.

Taking a look at the current Rangers blue line, Jacob Trouba isn’t going anywhere after signing a seven-year deal.  Adam Fox has been a revelation thus far and Brady Skjei may be unmoveable unless Seattle is obliging.  The Rangers have a glut of defensive prospects on the way, with high-ceiling players like K’Andre Miller, Nils Lundkvist and Joey Keane.  They also have Matthew Robertson, Yegor Rykov, Ryan Lindgren and Libor Hajek at or near the NHL-level.  That’s a lot of competition.

Obviously, not all prospects pan out, but to reasonably expect 3 or 4 of that group of 7 to be adequate NHL talent isn’t that much of a reach.  None of this is counting the possibility the Rangers are gifted a high-end defenseman in this year’s Draft.

So, where does this leave us? We have a player entering his age 25-season that would command a decent cap hit versus his overall value to the team.  He has an all-offense profile, which is at the moment buoyed by an artificially high shooting percentage. There are a wealth of quality prospects coming up behind him and in a fully rebuilt team, would be, what? A third- pairing guy who sees time on the powerplay? At $3-5m per year?

The most ironic thing is that his wholesale rejection of the advanced statistics movement actually hurts him worse.  His best-case profile is as an analytics darling who can drive possession and shot differential while minimizing his defensive shortcomings.

Honestly, I believe at this point it would be best to look to move DeAngelo at the deadline or at the Draft, hopefully to a team who has bought his inflated offensive value as the new normal and dreams on a guy finally hitting his upside.  The return could vary, but a combination of future financial savings, risk abatement and received future value make him an integral piece to the rebuild, albeit via trade.   Given all the factors discussed above, I don’t see any way he is a part of the future.