For years, Jimmy Howard was a curse for the Rangers. Posting a 10-3 record and a sub-2.00 GAA, Howard always found a way to beat the Rangers. Last night was different, as the Blueshirts put up three in the second period and then added a shorthanded insurance tally in the third en route to their 5-1 win. Henrik Lundqvist, often the victim of the Howard curse, was strong in this one, making 35 saves including 16 in the third as the Wings pressed.

The Rangers held their own against the inferior Wings in the shot differential department, managing to not be crushed like they usually are. That’s a win in my book. Special teams again took center stage for the Rangers though, scoring twice on the powerplay and adding that short handed goal to seal the win.

DeAngelo, back with PP2, scores giving the #NYR a 1-0 lead. Lemieux and Buchnevich assist pic.twitter.com/6j6Kl37TPY

Brendan Lemieux does a good job taking the Pavel Buchnevich pass down low and creating a chance, banking his attempt off Jimmy Howard’s pad. Tony DeAngelo was creeping to the back door and buried the rebound.

DeAngelo creates this one by cutting to the net, opening the passing lane for Buchnevich across the center line to Chris Kreider. Kreider does an excellent job of taking the puck off his skate and then picking a corner. That is not easy.

Old friend Dylan McIlrath pushed Ryan Strome into the path of the Adam Fox shot to give the Rangers a 3-0 lead.

Jacob Trouba looked awful on this 2-on-1, turning into a 2-on-0 once Andreas Anathasiou burned him. But this started with a poorly advised pinch by Libor Hajek that sprung the rush.

Greg McKegg’s shot hits off the shaft of Howard’s stick and the ensuing rebound eluded Tyler Bertuzzi as he blew a tire. McKegg had the puck all alone and buried it.

This heatmap is a little skewed as the Rangers turtled a bit in the third. There area a lot of quality chances here where Lundqvist came up strong. The Blueshirts had a lot of red in front too, which is a good sign for their offense. 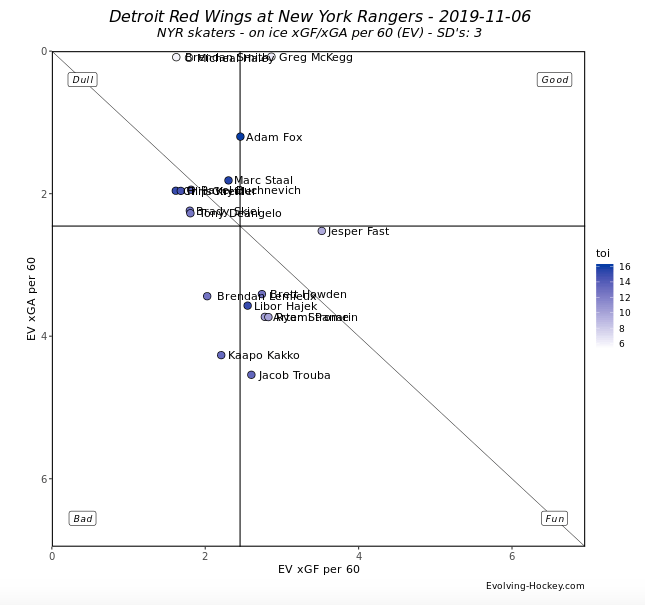 This is a little interesting because it doesn’t necessarily tell a big story. No one stood out as good or bad. Just a good amount of fun and dull. Just interesting.

This was one of those games that you expect the Rangers to win, much like Monday’s Ottawa game. That’s what this team is. A little good. More bad. And a lot of “shrug.” Let’s see how they do against Carolina, a strong team that is likely headed to the playoffs. The Blueshirts seem to do better against playoff contenders this year.