If there is one thing we know for certain, it is that coach David Quinn will be changing the lineup around after last night’s drubbing by the Ottawa Senators. Marc Staal, who has been a healthy scratch the past three games, will likely get back into the lineup. At this point, it’s a matter of whom he will replace.

While the optimal decision is keeping Staal out and moving Brendan Smith back to defense, if a lineup change needs to happen, we should live in a reality where Smith is a forward for this team and Staal is back in the lineup (more on that in a future post). That means it’s one of Hajek or Ryan Lindgren coming out of the lineup.

Beyond the obvious decision that needs to be made, it’s about the best situation for the kids to develop. For Hajek, he’s been getting caved in from the get-go and he has looked lost at times. He’s sporting a team worst (non-Staal division) 37.91 CF% and 34.53 xGF%. This is all while playing predominately third pairing minutes and getting 15 minutes per game at even strength.

What will probably happen: Staal comes in for Hajek or Lindgren.

What should happen: Hajek goes to HFD, Smith drops back, Nieves or some FWD comes up.

NYR has been an average team without Staal or Hajek on the ice. Hajek isn't ready for NHL top-pair TOI. pic.twitter.com/qVL8bP1jXH

Rob brings up more evidence that Hajek has been struggling. The team just has better numbers when Hajek is off the ice. This more or less comes down to role on the team. Like with Neal Pionk last season, Hajek is being force fed top pairing minutes and he is barely keeping his head above water. 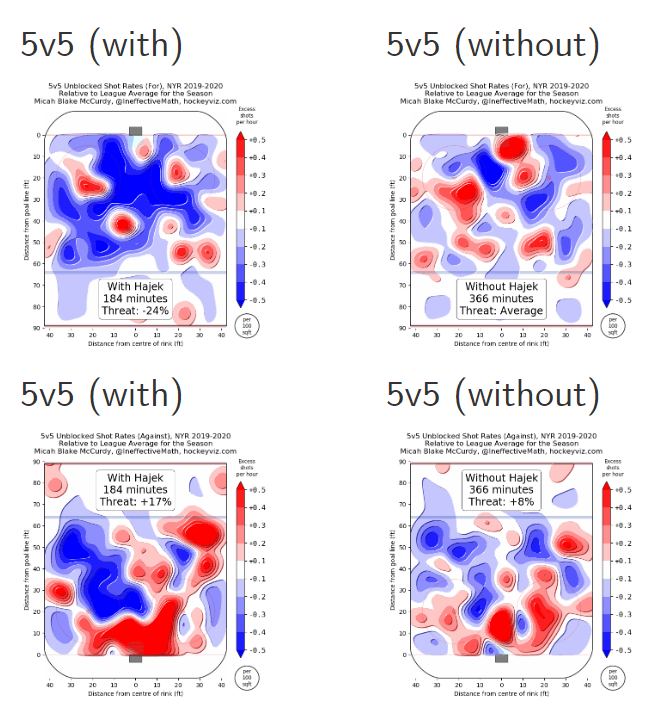 The heatmaps show how much Hajek is struggling. When he’s on the ice, the Rangers wind up with -24% below average shots for and return to an average team when he’s off the ice. There’s also a 9% net difference in shots against. With more than 10% of the season gone, we are beyond small sample size risks and starting to recognize trends. The fact remains that Hajek is struggling.

But the question isn’t whether or not he’s struggling. He is. The question is whether or not he’s best served getting top pair minutes in Hartford or being dropped in the lineup at the NHL level. Last season, when he was paired with Pionk and playing third pairing minutes, he excelled. That was only five games, but the difference is striking. The other issue with sending him down is roster construction in Hartford.

As long as Brady Skjei continues to struggle, the Rangers are going to have issues filling out that top pair. It means someone is going to be overwhelmed. Does it make sense to have Hajek, one of the centerpieces of the Ryan McDonagh trade, struggle in that role? Or does it make sense to have Skjei adjust? Or just let Staal ride it out? It’s not an easy decision to make.