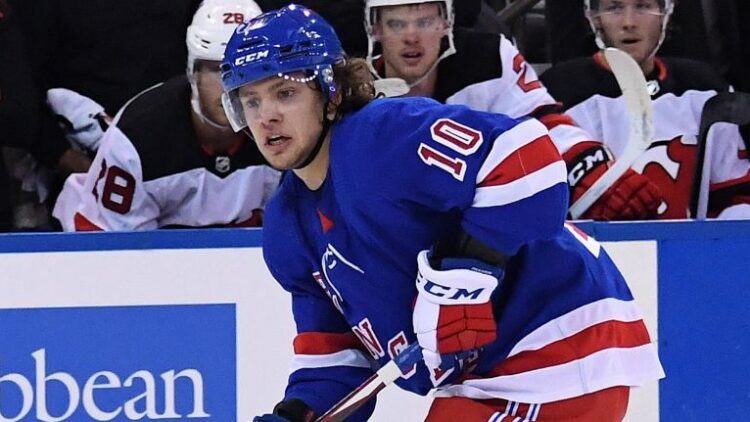 This past month or so has been an interesting one for the Blueshirts. After a string of lousy games and some weird lineup and asset management decisions, the Rangers seem to have righted the ship in these most recent several games. Reactions have been all over the place – we were supposed to fire David Quinn a week ago and now Ryan Strome is the perfect complement to Artemi Panarin. Watching the game against Nashville I had a lot of thoughts on who played well and how (Georgiev with the in-close stops! Chytil’s hands! a whole score of other nice individual efforts, really), but I think there’s a broader lesson high above the micro view that might help alleviate some of these rapid-cycling emotions and resultant hot takes that are flaring up around the fanbase.

Let’s start with the bad: there have of course been more duds than not so far this season. Games that seem lifeless and devoid of good hockey are hard to keep optimistic about, but if you try hard there’s always some silver lining. Kaapo Kakko will typically have some extended zone time with the puck, even if he doesn’t seem to put the team on his back or click quite yet. Jacob Trouba might give away the puck, sure, but he’ll also provide excellent gap control on high-danger opposition chances and turn it into a stretch pass. Pavel Buchnevich has been good on the boards, provided we take the “soft Russian” sunglasses off for a moment and look at what’s going on the ice. There’s a there, there. Always.

That’s not to say that games like the ones against Tampa Bay and Nashville aren’t far more exciting and soothing to see. Those kinds of games are surely better to watch because all of those little things not only appear with greater frequency and a wider base of coverage (seemingly every player on the ice looked at least good, if not great, against what I saw of the Predators game), but they also seem to fit into a comprehensive game plan that might just work. It’s a nice feeling that assuages the underlying anxiety of a rebuild – maybe the brass sees for certain, incontrovertibly so, that the kids are alright. Maybe the fans see it too.

These anxieties are understandable, and irrationally uncontrollable as all anxieties are. But we need to remember sample size – there’s a lot of hockey left to be played – and whether it’s bold pronouncements about the fate of the franchise or overly exuberant proposals that draw conclusions too firm to be based on roughly 15-20 minutes of hockey from any one player, there’s in a way something to be learned. We might consider, as fans, that this whole season is in some sense the preseason, and that we just want to see small bright spots that we can cautiously predict uplifting developments from. That’s at least how I look at the day-to-day game situations, because if every single game is a total referendum on the team’s Stanley Cup odds over the next full decade I may as well just do something more enjoyable like my administrative law readings.

Of course, it’s not just how to relax on an average Tuesday evening that’s important, but also how to survive the full 82-game season without losing your marbles. Instead of stringing together big determinations based on each 60-minute increment of hockey we watch, saying “well this game featured some awful defense, which means the team has a terrible defense, which means the whole defensive outlook for this team is doomed and we’re going to inevitably ruin K’Andre Miller and Nils Lundkvist, among others,” we can do something different. We can make a decision, and I realize this is contradictory of me in some ways regarding the forest/trees dynamic, to proceed with cautious optimism and think to ourselves “well, Brett Howden showed a little bit of spark, and maybe he’ll show a little bit of spark next game, but if he doesn’t overall he’s taking strides to some degree.” We can choose this outlook, or we can spend the entire season smashing the glass on the big red button and hitting panic at every turn. It’s not as fun to do that, at least for me, so there’s only one real choice to make. You gotta stay positive.