Any good feelings that that the NY Rangers had after a solid win over the Buffalo Sabres were thoroughly crushed after the Boston Bruins put up five straight in a dominating win over the Blueshirts. The top line of Brad Marchand, Patrice Bergeron, and David Pastrnak was way too much for the Rangers to handle, combining for five goals and 13 points to provide all the offense the Bruins would need in this one.

The Rangers didn’t have much game flow, were simply not aggressive enough, and let the Bruins run all over them. It’s to be expected, as the Bruins are again one of the top teams in the Eastern Conference and the Rangers, simply put, are not. The loss of Mika Zibanejad, thus exposing the extreme lack of center depth, only made things worse for the Rangers. They never recovered, and quite honestly were never really in this one to start.

Haley gets his first goal of the season. pic.twitter.com/5zPXhFE4Bw

I don’t know how but Micheal Haley eluded Torey Krug in front to bang home the rebound on the Brendan Smith shot. This is awful defense by Krug, quite honestly, but good job by Haley to get to the net.

This was a controversial one. Pastrnak blew by Jacob Trouba, cut to the net, and then get upended by Libor Hajek on his attempt. He ran over Henrik Lundqvist due to the trip, and Bergeron was there to put home the rebound. The goal was upheld.

I honestly don’t know how Marchand can be this open in front, and how Tony DeAngelo can just kinda watch him dangle. What was that?

Four Rangers on one side of the ice, no one picks up Charlie Coyle. Charlie McAvoy just had to make sure the puck got there. I have no idea what kind of defense that was – all of them are at fault here.

Let’s all just watch the puck and not look behind us. This time around, it was Greg McKegg who didn’t see Marchand behind him. This is the team defense the Rangers play.

Zdeno Chara has a great shot, but no one pulled Coyle out of the way in front. Based on how late Alex Georgiev reacted, he never saw it.

This was a solid passing play starting with Artemi Panarin to DeAngelo to Pavel Buchnevich for the finish. A lot of skill here and getting into open spots.

Another shot from the slot, another goal. Defense optional.

Pretty sure the Bruins stopped trying here since there were only two minutes left, but that’s two guys in front and no one picked them up. The rebound off the DeAngelo shot went to Chris Kreider, who banged it home.

I still think the Bruins forgot that there was time left on the clock. Jaroslav Halak lazily kicked out the rebound right to Brady Skjei, who was gifted this one with no one covering him.

I feel like this is as expected. The Bruins dominated the Rangers to a 60-40 CF% and a 57-43 xGF% advantage. Considering how many goals for the Bruins came from in front, seeing five ‘G’ markings from the high slot and down is discouraging. Just not a good defensive effort. 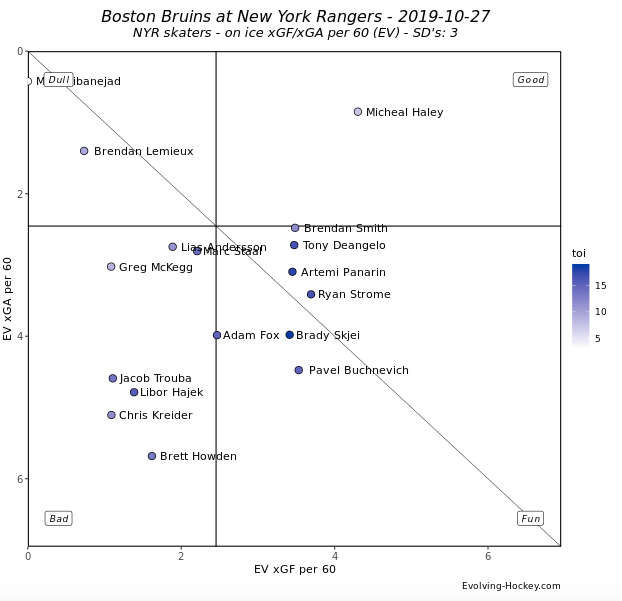 There’s a whole lot of yikes here. When Haley is the only skater in the “good” section, and only five Rangers are on the right side of the “good” line, it’s a problem. Then again, are you surprised?

It doesn’t get any easier for the Rangers. Tampa comes to town next, and they are arguably better than the Bruins. Hopefully the Zibanejad injury isn’t serious.