A complicated ode to Dan Girardi 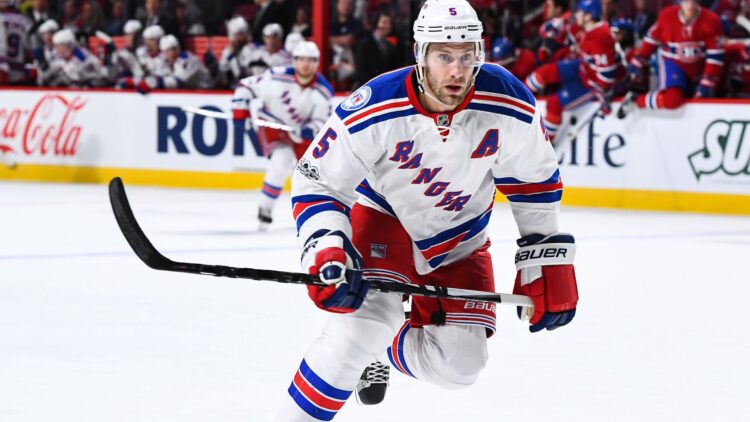 As many of you are now aware, long-time Ranger Dan Girardi announced his retirement from professional hockey on Friday.  All in all, G, as he was affectionately known, suited up in 13 NHL campaigns, appearing in 927 regular season contests plus 143 more in the playoffs as a member of the Rangers and Tampa Bay Lightning.  We had something of a complicated relationship with Girardi over the years, but now that he has decided to hang up the skates, I’d like to reflect a bit on his career overall and his time with the Rangers.

Obviously, Girardi’s latter career with the Rangers was challenging, ultimately leading to his buy-out and subsequent signing with Tampa Bay.  It wasn’t always like that, however.  I remember Girardi’s first NHL season, 2006-2007.

I had recently graduated from undergrad at the time and it was the first time since childhood I remembered seeing some glimmers of hope within the organization. Henrik Lundqvist had taken the reigns from Kevin Weekes in goal, Ryan Callahan was seeing his first NHL action, Sean Avery began wreaking his particular brand of havoc and the major vets (Jagr, Straka, Nylander, Shanahan) were all still productive.

The blueline however, was an absolute disaster (imagine that, Rangers fans?).  Michal Rozsival and Marek Malik were objectively the best defensemen on the roster and the season saw a revolving door of journeymen like Jason Strudwick, Dave Liffiton, and Bryce Lampman supplement aging defenders like Sandis Ozolinsh, Paul Mara, Darius Kasparaitis and Aaron Ward. A young, undrafted OHL defenseman became a needed breath of fresh air.

Girardi played 34 games that first season, and while not much of a goal scorer (zero goals, in fact), tallied 6 helpers and played lock down defense, finishing with a positive 7 in +/-.  Now, this was right around the time that prospects were becoming all the rage as hockey transitioned into more of a young man’s game.  I remember wondering on multiple occasions if my positive assessment of Girardi was fueled by a barren prospect cupboard for multiple years under Glen Sather, or rather his presence was the beginning of an organizational transition to better management and internal development.

Fast forward a couple seasons and Girardi became a centerpiece of the blueline, which believe it or not was a legitimate strength during the Tortorella years.

You know how when you see someone for the first time in a while and you are shocked by any physical changes in weight, age, hairstyle, etc.?  On the other hand, when you live with a person or see them frequently, those changes happen more subtly and are less noticeable.  That’s what Girardi’s growth was like for me.  We spent every day watching him develop as a player, but we were so close to it, we hadn’t realized that he had become one of the best defenders in the NHL.

He was an iron man. From 2007-2008 through 2014-2015, Girardi missed a grand total of 5(!) games.  Let that sink in for a moment.  Five games. Over eight seasons. Absolutely insane. Of any complaints anyone could levy at Girardi, lack of durability was certainly not one of them.  The running joke became that he wasn’t actually human, at all, but some sort of advanced Canadian cyborg.

During his tenure in New York, the Rangers appeared in three Conference Finals and one Stanley Cup Final, winning one President’s Trophy and only failing to qualify for the playoffs once (that one is on you, Olli Jokinen).  He was an All-Star in 2012, is the all-time leader in blocked shots and served as the alternate captain of the team for 6 seasons.

Girardi was at the center of a long and successful run for the Rangers, one that introduced a new generation of fans to the Blueshirts and created a huge amount of affection from NYC.

However, at the trade deadline in 2014, the Rangers were at a crossroads.  Girardi and captain Ryan Callahan were scheduled to become free agents after the season, with Marc Staal following a year later.  We all know how that story ended; Callahan was shipped out to Tampa Bay for Martin St. Louis and Girardi signed a sizable six-year, $33 million extension.

The contract extension marked what became the beginning of the end for Girardi and the New York fanbase. The New York City market has a particularly savage way of calling out players’ performances when they feel they are overpaid. Coupling this deal with Marc Staal’s the following year placed unique salary cap pressure on offensively limited defenders in a changing game.

And change the game did. Over the first few years of the extension, the game seemed to speed up and Girardi seemed to slow down.  Maybe it was all those years of iron man performance, or all the blocked shots.  Girardi put his body on the line for his team for years and it seemed to be getting the better of him, finally.  Maybe he was just a product of a different era; an old school tough-as-nails defender who would clear the crease, block shots and stand up for his teammates.

As the game transformed into a possession and transition framework, players like Girardi were left behind.  Despite years of dedicated service and quiet professionalism, it appeared the end was near.

That end finally came in 2017, when the Rangers announced they intended to buy out the remaining three years of Girardi’s deal.  With the expansion draft looming and the salary cap tightening, the organization cut ties with a once-core piece of the team’s most recent run of success.  As we all know, Girardi played his final two seasons in Tampa, with similar results to New York.  He was more appropriately utilized in Florida, but those two seasons saw the types of disappointing ends that he grew accustomed to at the Garden.

One of the biggest problems that I have personally with the whole situation was the usage.  Alain Vigneault insisted upon playing Girardi huge minutes and in the most crucial situations when he knew Girardi’s play had declined.  He did not put him in the best position to succeed and drew unnecessarily intense fan ire for his performance in that role.  Had Vigneault recognized that all the years of wear and tear had taken their toll on Girardi, he could have sheltered him from both top competition and the vitriol from fans.  I guess it’s no surprise that Vigneault himself was put out to pasture not long after.

As Rangers fans, our relationship with Girardi was a complicated one.  Like a romantic relationship that starts off full of promise and excitement, ultimately to wither despite best efforts.  I can’t help but think of Ulysses by Tennyson;

We are not now that strength which in old days
Moved earth and heaven, that which we are, we are;
One equal temper of heroic hearts,
Made weak by time and fate, but strong in will

No one can ever say that Girardi did not give his absolute all to the New York Rangers franchise, and despite the bitter end to his tenure here, I think we should all be grateful for the years of dedication, passion, pride and selflessness that should be his mark on the franchise.

Good luck in retirement G, you were a warrior on the ice and a gentleman off it.  Some fans won’t be able to look past those few painful years, but for all the criticism and brutal honesty, you should be remembered as a great Ranger.