The New York Rangers and Kevin Shattenkirk: An Unfortunate Ending

July 1, 2017. I get the notification on my phone that the Rangers have agreed to terms with defenseman Kevin Shattenkirk on a four year deal. “WHAT A STEAL!” I shouted and nearly caused my wife to veer off the road. Then came the offseason mental lineups one tends to do when a deal like this is announced. “So the top pair will be Shattenkirk-McDonagh, 2nd pair Brady Skjei-DeAngelo, 3rd Staal-Smith”. Oh how naive we all were.  Fast forward to the start of the 2017-2018 season, we got less than a dozen periods of Shattenkirk-McDonagh as a pair (Thanks AV). The news also comes out that Shattenkirk requires surgery for a torn meniscus he suffered in camp and his season is done.  The rest is history: the letter goes out, trades occur, Vigneault is fired, and the rebuild begins.

We now get to the part of this saga in 2018 where an old friend enters the mix for Shattenkirk, David Quinn. Despite extreme highs from the Vigneault firing and the hope of a rookie head coach to do the best with what he had, it sadly got worse. Quinn ultimately does not use Shattenkirk in the role he was signed to be: a puck moving, power play QB defenseman. Instead, Shattenkirk found himself in the “Quinn bin” some nights while his ice time was given to the likes of Neal Pionk, Tony DeAngelo, and Marc Staal. Shattenkirk himself saw 1173:16 of TOI all season long via NaturalStatTrick while Neal Pionk, Marc Staal, and Brady Skjei were the top 3 of total TOI for all Rangers defensemen. That is just brutal deployment.

A spiraling 24 months come to an end August 1, Shattenkirk is bought out. An otherwise perfect offseason acquiring elite talent and elite prospects via trades, the draft, and free agency takes a step back. Rangers brass decides to save for the immediate future rather than the longevity of who is actually better. It’s gonna be tough to watch Shattenkirk play on a one-year “show me” deal somewhere and put up 50 points. Here is hoping with the cap space created, DeAngelo and Lemieux will be signed and soon. Is it October yet? 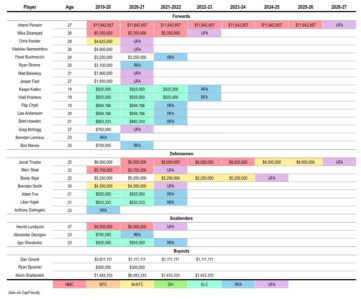 Chart courtesy of Shayna Goldman with data from CapFriendly