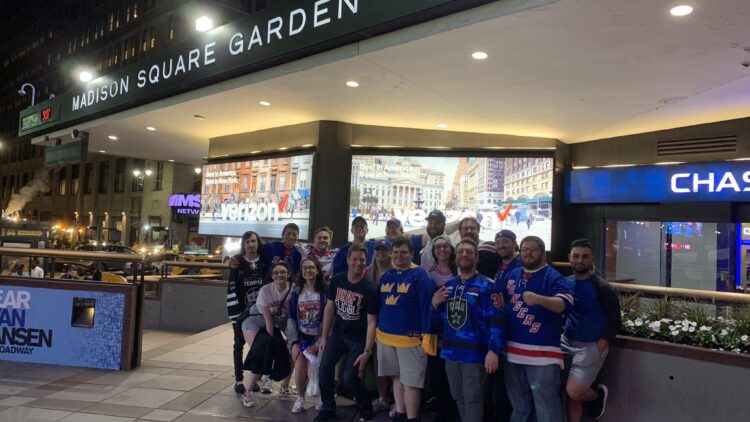 To start, Devils GM Ray Shero announces that the 1st overall pick is Jack Hughes. This results in a pop at the draft party that speaks to the excitement of the entire season. The tank paid off. The stage is set for what we all have been anticipating these last couple of months since the draft lottery. The crowd gathered in MSG then starts chanting over and over again two words: “Kaapo Kakko”.

When Jeff Gorton started making his way to the stage with other front office staff, you could sense a slight tension and doubt in the air at MSG. Would the front office “Ranger” this pick and go off the board? (despite all indication and reports that it would be one of Hughes or Kakko). These fears–now with the benefit of hindsight–would quickly fade. Jeff Gorton went to the microphone and said those two, beautiful words: Kaapo Kakko. Immediately following this at the party: Euphoria.

While at the draft party, the Rangers organization did a fantastic job in also introducing the next wave of Rangers. Prospects Yegor Rykov, Igor Shesterkin, Joey Keane, Morgan Barron, and Adam Fox were all in attendance. Shortly after the selection of Kakko, the 5 prospects made their way to the floor of MSG with the network’s John Giannone introducing them to us. This was set up on a stage in the middle of the Garden floor. While introducing the prospects, the crowd gave thunderous applause for prospect Igor Shesterkin with the much proven hype surrounding his signing, and the hope of his development to become the heir apparent to Henrik Lundqvist.

What’s better than a party? A “Drafter party”! Thanks to the VERSA rooftop bar for hosting us following MSG’s party.  It was the ideal place to really cap off the celebration before heading home. It is remarkable what the Rangers have accomplished in 18 months with this team.

While everything surrounding Kappo and the prospects was exciting, there was more to this event than what was on the surface. Personally, what made this event a must-go was the opportunity to meet the people of Rangers twitter.  A special shoutout to NYR Twitter legend Bryan Wojtanik, whose generosity made it possible for me to even attend the event. No better way to ring in a new era than among friends.

Next stop in Rangerstown, Artemi Panarin on July 1.