The last skater to receive a report card this year is Brendan Smith. Not because we are saving the best for last, but because I had no idea on which position to grade him. He basically split his time as a defenseman and a winger last season. But you know what? He did a pretty decent job playing out of position and bouncing around the lineup like that. Given the circumstances, he certainly exceeded my expectations. I’m grading him as a defenseman, but his numbers will be a combination of both, if that makes sense.

No matter which way you slice it, the four year, $4.35 million deal is going to go down as a bad one for the Rangers. Those of us who wanted him re-signed, it didn’t work out. But that doesn’t mean he isn’t useful on a team that doesn’t really have a cap space problem right now. He was still fourth among defensemen with a 47.79 xGF%. I don’t know how much of that was on defense or on wing, but still bouncing around the lineup like that has to be difficult. His splits were 2.29 xGF/60 (3rd) and 2.50 xGA/60 (3rd). So believe it or not, Smith was, dare I say, steady?

Where Smith looks bad is his contract and the fact he was constantly the 7D forced to play LW under David Quinn. That has more to do with Quinn’s obsession with Neal Pionk than it does Smith’s play though. He was still a net positive on both shot rates against and shot rates for, as we see in the below. 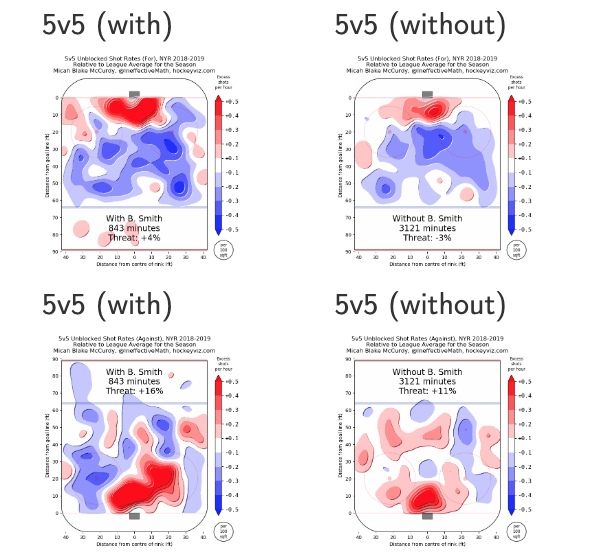 Considering I needed all four of these, instead of posting them separately, I posted a group shot of all four. Let me know in the comments if this is easier to read or not.

The top two heatmaps are shot rates for, and we see that Smith had an overall positive impact. There’s more blue around the middle of the zone when he’s on the ice, but the red in front is significantly larger. The threat level offensively jumps 7% as well.

The bottom two heatmaps are shot rates against, and again we see a relatively positive impact from Smith (5%). The right side of the zone is still a mess, but there’s more blue on the left side, and since Smith played mostly LD or LW, this makes some sense. Although I could be reading this wrong, since Smith is bouncing around the lineup so much.

In the end, Smith is certainly not the worst option on the blue line. He outplayed Marc Staal and Neal Pionk last season. He also outplayed Brady Skjei, although I don’t expect that to continue once Skjei gets a real partner. Smith, when deployed correctly can be a useful piece of the puzzle on the bottom pairing, faking it as a LW here and there. There are certainly worse options to have than Smith, and some are on the team right now, especially when the contract really doesn’t matter.