When the Rangers signed defenseman Fredrik Claesson to a one-year deal, it was viewed as a low-risk, high-reward move for a 25 year old defenseman. The consensus was that Claesson was undervalued, and probably already better than most of the blue liners the Rangers had on the roster. While we weren’t necessarily wrong in that assumption, Claesson still had trouble cracking the lineup regularly. In the end, he finished his first, and likely only, season with the Rangers with a line of 2-4-6 in 37 games.

Claesson was never going to be a huge offensive driver. His role as the 7D was to fill in when needed and play a steady defensive game. He did just that, as he was one of the better puck movers on the club, especially under pressure. Claesson excelled in making the quick first pass to start the transition to offense. In those 37 games, Claesson finished with an xGF% of 47.88, which was behind only Shattenkirk and DeAngelo. His splits were 1.95 xGF/60 (last on the team) and 2.12. xGA/60 (best on the team). So the expectations were met by reality, as Claesson was a non-factor on offense but was the best defensive defenseman on the team by a wide margin. For a 7D, that’s better than anyone could have hoped for. 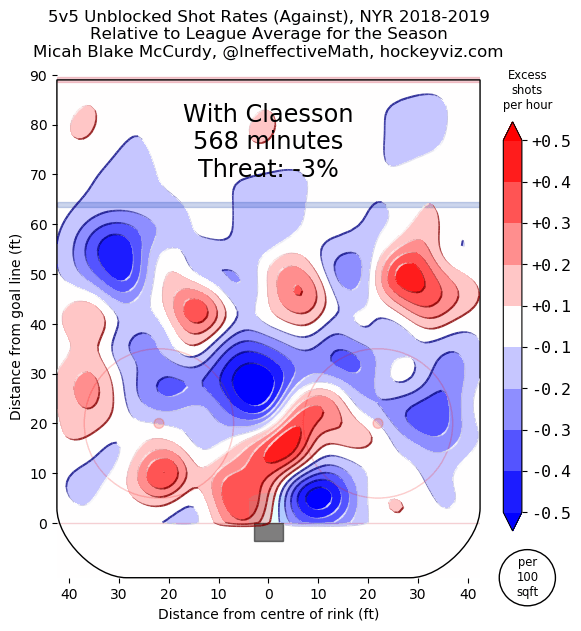 I love these shot heatmaps because it shows how effective any player is, and in Claesson’s case, these heatmaps for shots against show how good he was. He did so with noted black hole Neal Pionk as his primary defense partner (61 minutes). He also spent significant time with Tony DeAngelo (53 minutes). For reference sake, Claesson had 568 minutes of even strength time, and Pionk/DeAngelo were his two most common partners. Suffice it to say, he was bounced around the lineup a lot.

There isn’t much else to evaluate when it comes to Claesson. He’s a defensive defenseman who excelled in one aspect of the game. For the price and the role, it doesn’t get much better than that. I usually don’t like to give grades to players who played fewer than 40 games, but given his role, I think he met the games minimum.