Want to feel sad? Think about what Marc Staal could have been if he had two eyes. Alas, he’s playing with at most 1.5 eyes. Side note: I was at MSG when he took that puck to the eye. I’ve never heard MSG so quiet. Anyway, that was years ago, and Staal is the longest tenured Rangers skater now.

On the ice, Staal is what he is. He’s a guy that won’t drive offense, but will at least play up to his partner if that partner is a good puck mover. Unfortunately Staal was mostly paired with Neal Pionk for most of the year, so that wasn’t in the cards. However when he was with Tony DeAngelo, we saw an uptick in his game. 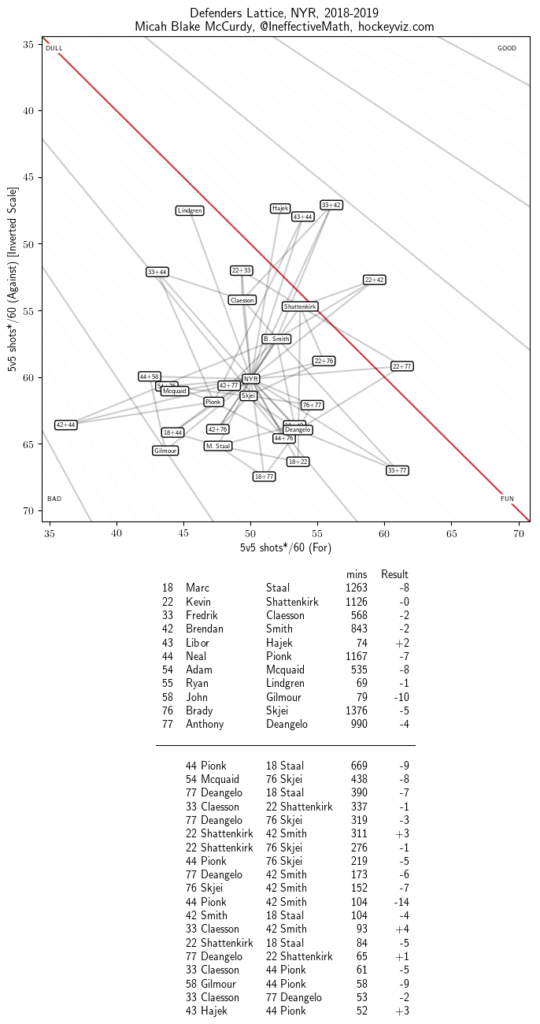 That Staal/Pionk pairing was consistently together and consistently bad. I don’t think you needed me to tell you that, though. What is interesting, though, is that Staal and DeAngelo played together as the third most consistent pair, and the results weren’t exactly stellar either. That last bit was a little surprising to me, because it looked like DeAngelo was bringing Staal up to respectability. Perhaps it was just looked that much better because of how bad Staal/Pionk was.

Despite all that, though, Staal still got the second most ice time at even strength among all defenders. That’s a product of David Quinn relying on his veterans, and the other LD options aside from Brady Skjei (who got the most ice time) were pretty bad.

Staal was bad at even strength, but he was by far the most used defenseman on the penalty kill. The results were, as expected, horrible. 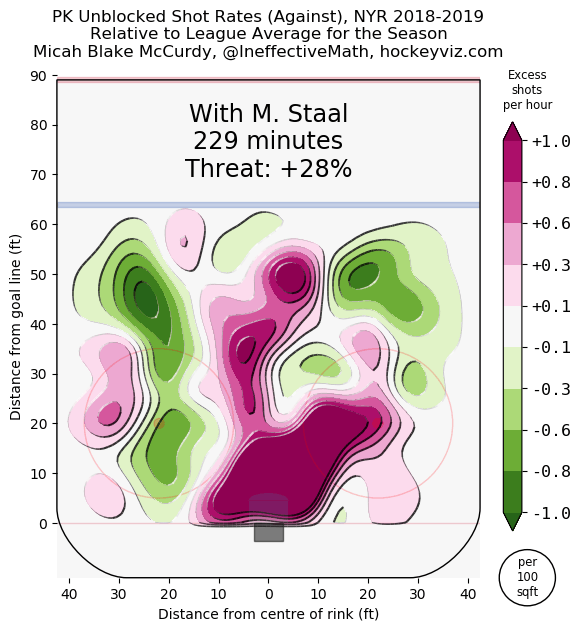 The penalty kill with Staal on the ice was a disastrous 28% above the average threat level. Now there is a lot to consider here, as most of the red (purple?) is on the right side of the ice where Pionk played. That’s worth keeping an eye on if they get split up on the PK next year. 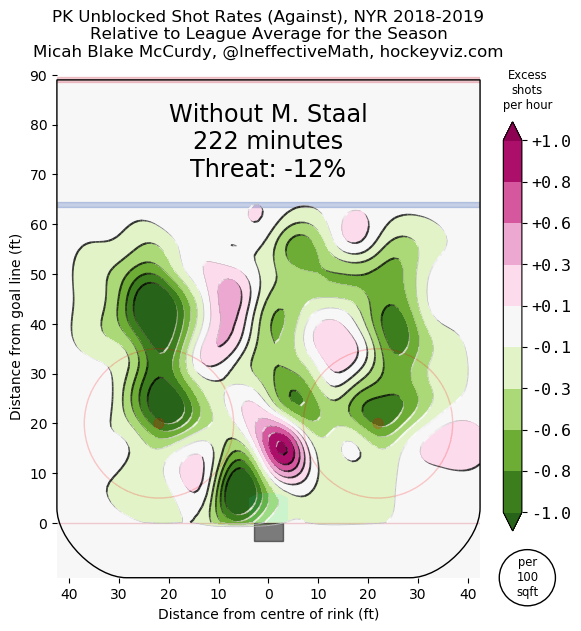 Meanwhile with Staal off the ice, the threat on the PK drops to 12% below normal threat levels. The left side of the ice has significantly less red in it, and is actually shaded green. For what it’s worth, Brady Skjei was the main LD used on the PK when it wasn’t Staal. But you can see the difference in the shot heatmaps.

Staal is what he is at this point. None of this analysis should be new to any of you. I’d like to see what he can do with a better RD attached to him. But for now, he’s got two years left and can help the Rangers stay bad, if that’s the direction they want to go in next year.

Grade: C-, mostly because it’s hard to be surprised by this anymore.