Utility man extraordinaire, Jesper Fast is one of those bottom-six guys that can play up in the lineup when needed. He’s a very smart player who is usually in the right place at the right time. He’s the type of player that teammates love, which is why has been the recipient of the Rangers Player’s Player award for four years in a row.

When it comes to scoring, Fast’s tool set really limits him since he doesn’t really have the hands to be a scorer, but that doesn’t stop him from contributing. He played a good portion of this year injured, thus had a bit of an off-year with a line of 8-12-20 in 66 games. He seems to alternate 30 point seasons with 20 point seasons though.

Proponents of Fast, including myself, usually point to his defensive play to show his value. It’s the stuff that rarely shows up on the score sheet, but luckily nowadays we have quantifiable numbers to show defensive aptitude. Fast’s xGF%, despite his lack of offense, was still 5th on the club (3rd without Zuccarello/Hayes) at 48.71%. For just 20 points, that’s a very good number, and when broken down into the offensive (xGF/60) and defensive (xGA/60) stats, it really shows how good Fast is without the puck. His xGF/60 was just 2.27 (13th, 11th without Hayes/Zucc), but his 2.39 xGA/60 was good for 5th (3rd without Hayes/Zucc). Considering Fast’s usual role as a defensive player and how bad this team was, that is pretty impressive. The stats match the eyes, interesting concept.

Taking this a step further to look at his defensive impact, let’s look at my favorite: shot heatmaps!

With Fast on the ice, the Rangers are actually around league average at limiting threats! The +3% threat level is 3% above league average, meaning Fast contributes a great deal to limiting shot quality and quantity against. Context matters here, and let’s remember that the Rangers are awful defensively for the most part (notice that red spot in front of the net and by the right circle almost never goes away). But Fast has turned that entire left circle blue. Still some trouble areas in the high slot though. 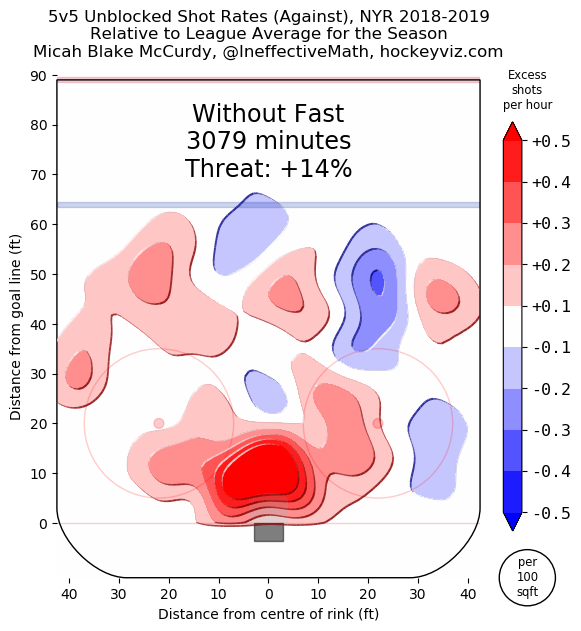 Meanwhile without Fast is a tire fire. While one player does not make a team defensively excellent while on the ice, Fast is certainly a positive player in this regard.

Worth noting that offensively, Fast doesn’t move the needle much. The Rangers are 2% under league average threat level when Fast is on the ice and the same when off the ice. There wasn’t much to look at there, so I left it out. If you want to check it out, go to hockeyviz.com.

Now the interesting thing here is that while Fast excels at even strength defense, it may necessarily translate to the penalty kill, or at least not in the ways we have available to evaluate today. (There are a lot of variables that go into the below heat maps, and I’m doing the best I can with logical guess work). 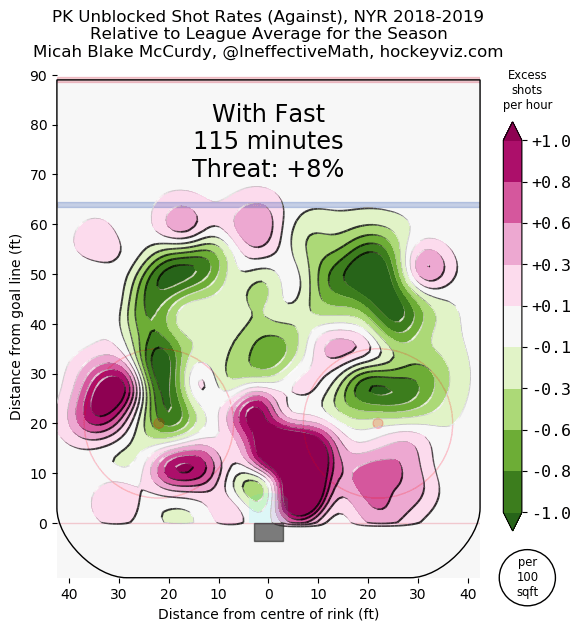 With Fast on the ice when a man down, the usual problem areas exist. Basically right in front and on the right side of the net mouth. As a forward, he’s usually tasked with coverage up top, which is the green area at below league average. So that’s good. My guess is that, given the location of the purple shifting and what we know about defensemen/forward positioning on the penalty kill, Fast was deployed mostly with Marc Staal and Neal Pionk, who were bad and gave up goals down low on the PK on the regular. Based on the below, I’m actually close to right, with some Brady Skjei sprinkled in. 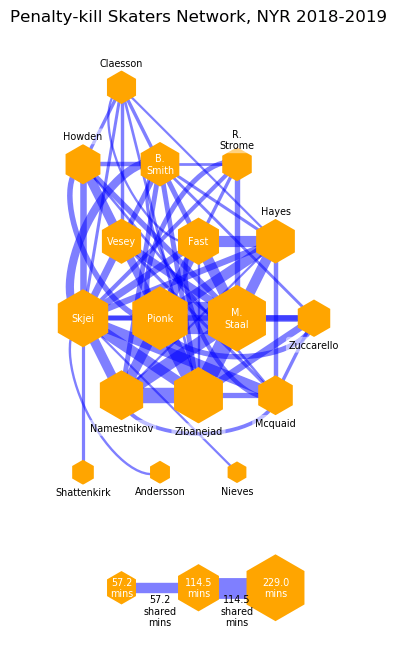 So my initial guess is right? I’m going with that. 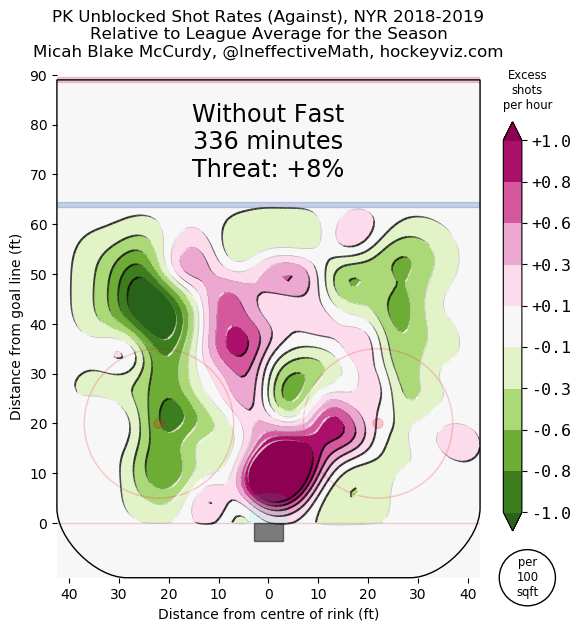 Meanwhile without Fast on the ice, the threat level remains the same, but the colors shift a bit. The high slot area gets more purple and some of the purple in front disappears. Logical guess work leads me to believe that with different defensemen on the ice, the Swiss cheese down low isn’t available, and with less able defensive minds up top, more shots come from up there.

So with Fast we have a guy who doesn’t move the needle offensively, but is one of the better players on the team defensively. To be able to put up surprisingly decent numbers on this tire fire of a team is impressive. Fast is one of those guys who complements others quite well by doing the dirty work and can really bring a line up defensively, and it showed this year.