As we continue with our player report cards, we move on to players that are significantly harder to grade. Sure, the KZB line all got A’s, but that was expected. Vlad Namestnikov, on the other hand, is a bit of a mixed bag. Namestnikov’s line wasn’t sexy, putting up 11-20-31 in 78 games in his first full year as a Ranger while bouncing around the lineup, but mostly in a middle-six role.

Namestnikov’s production will be closely tied to his $4 million salary, and 31 points for $4 million isn’t exactly what you want to see. Comparatively, though, JT Miller, the guy whom the Rangers – more or less – traded for Namestnikov, put up 13-34-47 on a loaded Lightning team while making $5.25 million. So this is pretty much a wash, but Namestnikov only has one year left while Miller has another four years left. Both are the same age.

As with everyone else, there is a need to look deeper into Namestnikov’s production than just points. In terms of xGF%, Namestnikov was actually 6th on the club at 47.88, and is 4th when you remove Kevin Hayes and Mats Zuccarello from the equation. Going a level deeper, Namestnikov’s xGA/60, which measures defensive play, is again 6th on the team (4th when removing Hayes/Zuccarello) at 2.53. Meanwhile his xGF/60 is down the list at 8th at 2.33 (again move him up 2 spots if you are removing Hayes/Zuccarello). This can be used to show us that we have a guy who is relatively under appreciated on the defensive aspect of the game while still chipping in offensively at a respectable clip.

Here we see that defensive impact, with Namestnikov on the ice (blue is good): 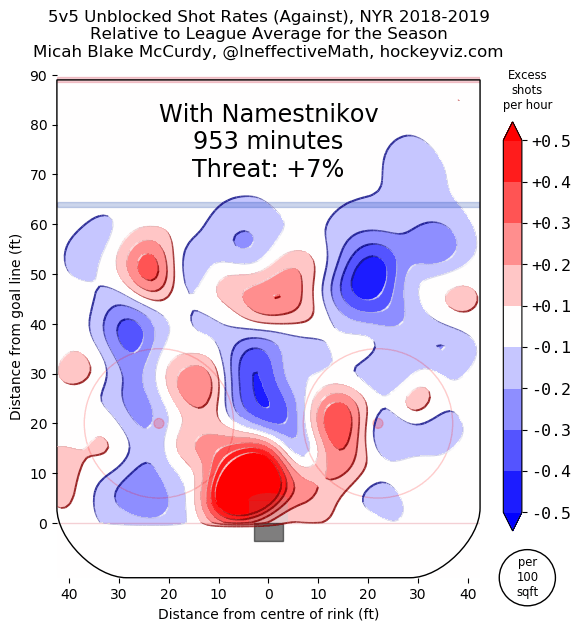 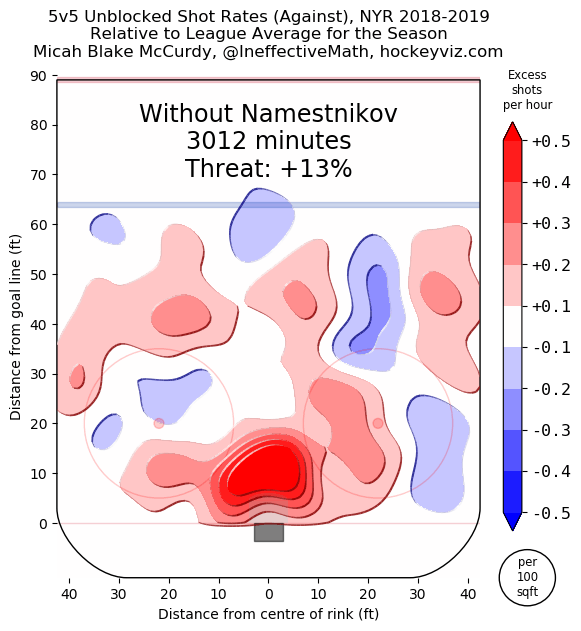 As with the KZB evaluation, the red areas are locations where the opposition takes more shots than league average, and blue is less than league average. The front of the net is a concern across the board for the Rangers, but Namestnikov’s presence has led to fewer shots from the high slot area. He also shuts down shots from the point areas, which is an expected result.

All in all, Namestnikov’s offensive performance was a bit underwhelming, considering he just came off a 20-goal, 45-point season last year. The dip to 31 points can be attributed to the lack of depth skill in the Rangers lineup. It looks like Namestnikov plays up to his teammates offensively, while still being respectable without the puck. He’s a solid depth player, if a bit overpaid.