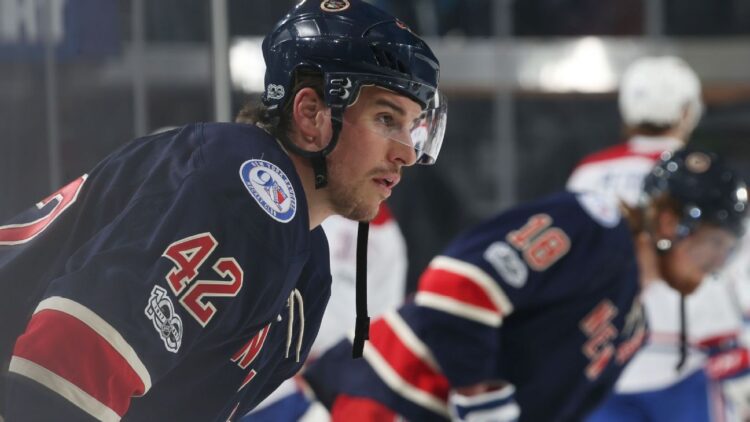 The Rangers have a problem on defense. Bloated contracts to Dan Girardi, Dan Boyle, and others have led to a…

Hmm. Well this is embarrassing. Let’s start over.

The Rangers have a problem on defense. The hybrid man/zone system that Alain Vigneault runs…

The Rangers have a problem on defense. They have for many years. As the rebuild continues to take center stage, the focus will shift from forwards –where the Rangers have a somewhat clear path to a successful rebuild– to the blue line, where any impact prospect is at least two years away.

That’s the one we want right? Right.

Even with some relative youth in Tony DeAngelo (good, but can’t defend entries), Neal Pionk (bad), and Brady Skjei (should be good?), the Blueshirts still have $16.7 million tied up in Brendan Smith, Marc Staal, and Kevin Shattenkirk for the next two seasons. That’s a lot of money for older defensemen who are either bad, unappreciated and misplaced, or currently a forward.

The easy statement is trade and retain on Shatty/Smith and buyout Staal. But with that comes complications. Even if the Rangers keep Fredrik Claesson, they’d be need to fill gaps. Certainly doable, but it’s likely not a path the Rangers are going to go down all at once. Ripping the band-aid off means giving kids ice time and matchups they may not be ready for, and we saw how well that went for Pionk.

Compounding this concern is the lack of NHL ready prospects. Libor Hajek looked ready, but he only played three games. Ryan Lindgren looked out of place in his first cuppa. John Gilmour is 26 and likely not getting re-signed. Sean Day needs more time. Joey Keane needs more time. Yegor Rykov is an unknown, but I’m optimistic. K’Andre Miller and Nils Lundkvist aren’t coming over yet. Barring a significant trade, the Blueshirts would need to go the UFA route. This is fine, but only top UFA is Erik Karlsson. As great as he would be, he’s not a savior when there is no one else around him.

What is more likely is a slow transition to the prospects, while also slowly jettisoning the aging vets. Shattenkirk appears to be on his way out. If the Blueshirts are indeed exploring a buyout, then a trade is more likely. Makes you wonder if they trade Shatty and then use their oodles of cap space on Karlsson. That would be a significant upgrade (no slight to Shatty, just Karlsson is on a whole other level).

In this unlikely scenario, the Blueshirts would have Karlsson, Staal, Smith, Skjei, DeAngelo, Pionk, and Hajek on defense…assuming Smith doesn’t stay at forward. It certainly gives the prospects mentioned above more time in Hartford, and it also provides some decent youth options in case of injury. But that’s still a scenario with Staal and Smith occupying spots and likely playing large roles.

Staal’s contract isn’t movable, so it’s likely he finishes his contract out. Plus he has a NMC, so unless he requests a trade, he’s staying put. Smith would be fine in a bottom-six role, but not at $4.35 million. A retained salary trade is the only out. But hey, he has value as a forward! Sorta? He may finish his contract out too, but there’s at least the AHL is still an option if a kid forces his way on to the roster.

This is not going to be pretty, even with the pipe dream of Erik Karlsson. The defense is going to be a liability for the immediate future, at least until the high level prospects are ready, if they ever are (there are no guarantees, after all). There is no quick fix here.