The Rangers Continue to Send Mixed Signals on Defense 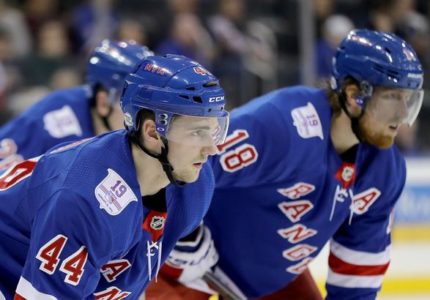 With only 16 games left in the 2018-19 regular season for the Rangers, it’s on David Quinn and Lindy Ruff to try something different when it comes to the defense.

I started downloading the Rangers shot attempts and expected goals per 60 by game last season when it became apparent that, while the offense was very much potent, the defense could not limit shots and chances for the life of them. Long gone were the days of Tom Renney and lower-event hockey for NYR, as Tortorella and then Vigneault had changed the culture to offense first, while Lundqvist was left to clean up the rising tide of shots and chances against.

In the end, this year’s defense is actually a slight improvement when compared to last year on the raw totals – which says something for what Quinn is trying to instill in this young team. That said, for the good that Quinn is preaching, there seems to be an apparent stubbornness to continue to trot out the same pairs on Defense, despite more intriguing options. It should also be mentioned that this could very well be a heavy symptom of Lindy Ruff, a man who does not have a reputation as a defensive specialist, but even so I doubt the coaching staff and the front office aren’t on the same page overall.

So, why am I seeking a shake-up on defense for the last 16? Simply put, the Rangers showed a glimmer of defensive aptitude during January and early February: 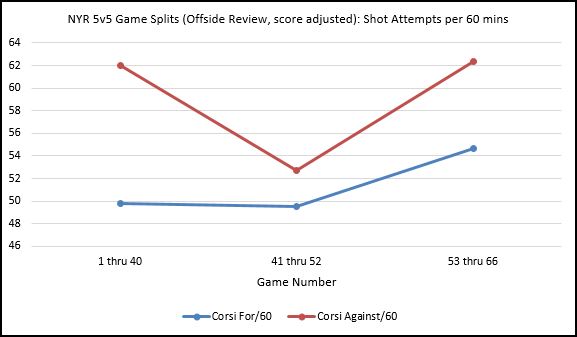 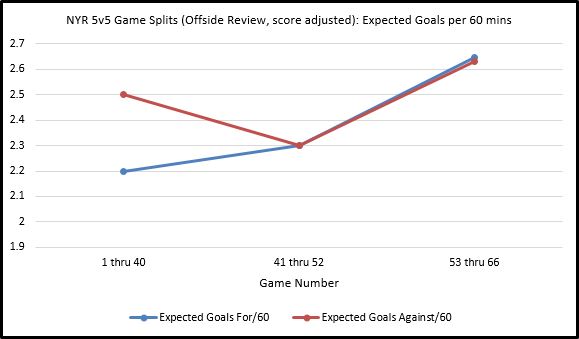 In the two charts above, a few trends stick out:

Because I want to focus on the defense, I will crudely explain the rise in shots and chances for. Around Game 40, Quinn and David Oliver started heavily playing their top six forwards, led by Zuaccarello, Zibanejad, and Kreider seeing nearly 20 minutes a night. Hockey is a strong link game – when the better or best players play more, teams do better. This of course applies to the defense as well.

So what would cause this sharp drop in shots and chances against during the 12-game stretch (Games 41 through 52)? As I just mentioned, hockey is a strong link game, so when two of the weaker defenders on the roster, Neal Pionk and Marc Staal, play less, the results are likely to get better. 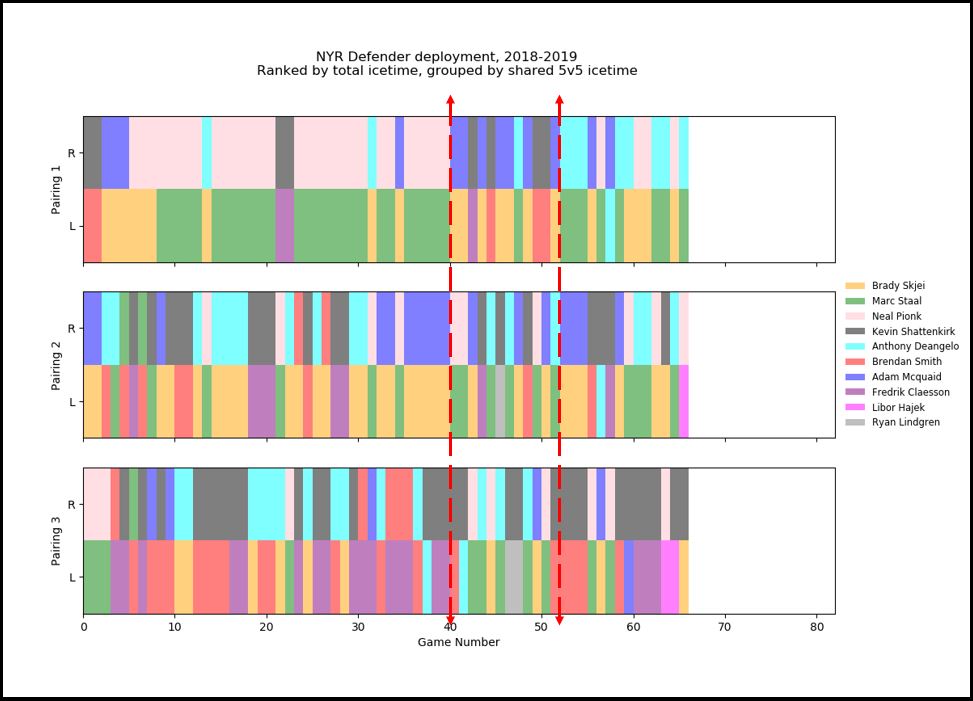 The above is a bit of an eye chart from HockeyViz, but focus on the blocks of colors that are consistent. To the left of the bars of colors are the Pairing numbers, 1-2-3, which indicate by game which defenders played the most (1 being the most, or top pair) together at 5v5. To the right are the colors assigned to each NYR defenseman. The reason we focus on 5v5 is that a typical NHL game sees 80-85% of the 60 minutes at 5v5. Also, that increases to nearly 90% in the playoffs. Special teams’ matter, yes, but over time the game is won at even strength.

Anyway, during Games 41 through 52, Neal Pionk missed four games with a lower body injury and was scratched on 2/6. When he did play, he didn’t see any top-pair TOI, and saw 3rd pair TOI three times. During the same stretch, Marc Staal only saw top-pair TOI once while seeing 3rd pair TOI five times. This is significant because as you can see outside of the two vertical/red arrow lines, Staal and Pionk are very consistently listed either together in Pairing 1 or at least as one part of Pairing 1 and 2. To simplify: during the 12 game stretch where the Rangers saw less shots and chances against, Neal Pionk and March Staal either weren’t playing or playing much less than the rest of the season.

Why am I focusing so much on Staal and Pionk, even though Adam McQuaid and Brady Skjei aren’t exactly having strong seasons? Because Staal and Pionk are two of the worse culprits when it comes to limiting shots and chances against: 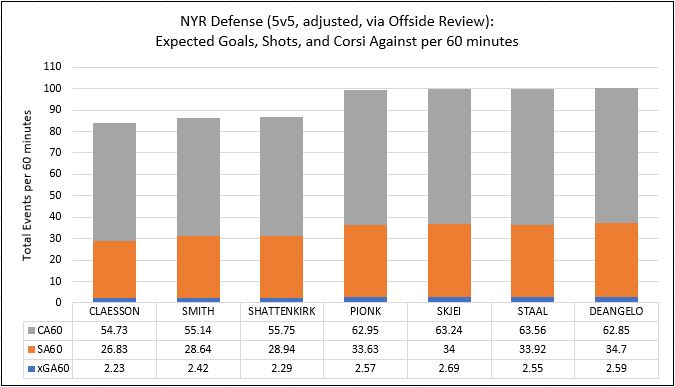 Reading left to right, you can see that Claesson (far left) tends to give up much less against than DeAngelo. Skjei and DeAngelo can typically look better than Staal and Pionk because Skjei and DeAngelo generate a good amount of offense to counteract their defensive misgivings. Staal and Pionk simply do not. To be fair, because Staal and Pionk have generally played more, they’ve also seen higher-TOI competition opponents, however when I looked at TOI splits there wasn’t a major indication that they do much better with lower TOI.

Look, the reason I took to writing about this is because unless Quinn and Ruff try something different down the stretch, what faith should we have as fans that it will change next season? Barring a magical LTIR visit, Staal will be back. Pionk will likely receive a contract as an RFA (yikes), even though some AHL time wouldn’t hurt him. I personally think Skjei has more to give, but he needs to be playing with a stabilizing defenseman (such as Smith or Claesson) in order to thrive with his skating and offensive abilities. Shattenkirk has been good on a bad team, but isn’t getting any younger.

In a lost season, Quinn and Ruff should’ve been trying different pairings more often, especially when pairings such as Staal-Pionk and Skjei-McQuaid were quite visibly not working. If Gorton and the Front Office have just been letting this happen, then they’re guilty by association. John Gilmour has been suspiciously absent despite succeeding in the AHL. Brendan Smith has been able to stay in the lineup as a forward because he can actually skate, something Staal cannot do at an NHL level anymore, even though he’s been effective out back. Libor Hajek has been good in his three games, but time will tell if it’s enough to push out Staal or Pionk.

In the end, the defense should be priority number one this spring and offseason. If you’re one of the fans who wants NYR to spend this summer (Panarin or Karlsson), figuring out the most optimized D-pairs for winning becomes even more critical. If Quinn is really coaching to win, then the mixed signals of playing some of the worst options on defense needs to stop now.