Generally speaking, the Rangers started this season playing some decent hockey for 20 games, then really stunk for the next 20, and lately have at least been competitive for the last six to eight contests (save Columbus and Boston, yikes). So a season goes, and while NYR aren’t expected to improve their standings position once the trades begin, there is possibly about another month where the roster continues to look as it is. The man who will stay, barring something drastic, will be David Quinn and his assistants, who are presumably still working under the guise of trying to win as many hockey games as possible. That is the theme of this article: what can be done, based on the numbers, to make this Rangers team at least competitive in their march to not making the playoffs.

Don’t get me wrong: I am pro-tank and do not think the Rangers are anywhere near being back into a win-now mode. The difference for me, though, is that I want Quinn to break away from the previous Rangers coaches mold of being unable to identify the weaker links on the roster. I do not think the Front Office is innocent in certain acts either, as there is little to no chance that the coaching staff and FO aren’t at least on the same page for the majority of decisions. Simply put, with the changes below I do believe the players will benefit from playing a role more suited for them, which in turn should help the team in the short term (potential trades) and long term.

We’ll start with the extremely obvious: Cody McLeod is not an NHL-caliber player. Even the one thing he’s supposed to do, which is to “protect” the kids, he doesn’t do well as he still ends up taking more penalties than he draws. He makes those on the fourth line worse, full stop. 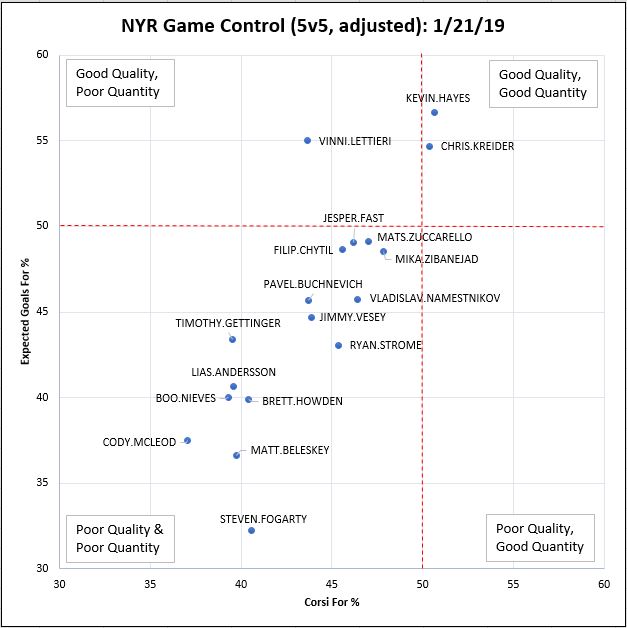 As you can see above, so far Brett Howden and Boo Nieves have had similar results when it comes to shot share and expected goals at 5v5. So why should Howden go down and Nieves stay up? Howden can help the team in the longer term if he develops into something more than a fourth line center. Nieves, on the other hand, is an RFA that could maybe be an effective fourth line center at the age of 25 on a better team. The other reason is that NYR won’t just rid of Strome mid-season, so it’s another reason to Howden to go get bigger minutes in Hartford. Personally, the moment Hayes is back, Howden goes down, leaving the centers to be Zib-Hayes-Strome-Nieves.

Is Pavel Buchnevich having his finest season? No, and I think even he would agree with that to an extent. Is Pavel Buchnevich a fourth line NHL player? Hell no. Look, in his three seasons thus far, he clearly has offensive talent that when paired with other top-end players, the group tends to produce results. He is not immune from criticism of course, but I would be swapping him out with one of Vesey or Strome (in that order) in a heartbeat. Fast could also come down the lineup, as he tends to do well regardless of where he plays.

One of the very apparent developments this year that Dave has been harping on is the Rangers tendency to give up the blue line when it comes to defensive zone entries. This has affected NYR’s shot share numbers, as their expected goal figures are higher than the shot attempts (meaning they’re letting up a lot of low percentage shots). When some zone entry and exit data was updated back on 1/14/19, the Ranger seemed to have two types of defensemen on the roster: those that defend zone entries well and those that can move the puck forward.

In the end, Ruff and Quinn need to avoid running back to what was the norm of the first half when Pionk is healthy again. I would like to see:

Shattenkik-Claesson (some proven success this year)

DeAngelo-McQuaid (DeAngelo has proven he can generate)

The odds of this is low, because it would require NYR to recognize that Marc Staal is barely half the player he used to be, and that Neal Pionk cannot defend at an NHL level (yet… I guess).

Not only does Gilmour have some interesting comparables for what he did in his 28 games played last year, he also showed an ability to drive the play forward more than his teammates (positive relative numbers all around), along with an ability to create offense when on the ice. Ryan Lindgren may turn into something eventually given that he is only 20, but in similar AHL TOI this season, Gilmour is clearly bringing more to the table in terms of being able to produce. 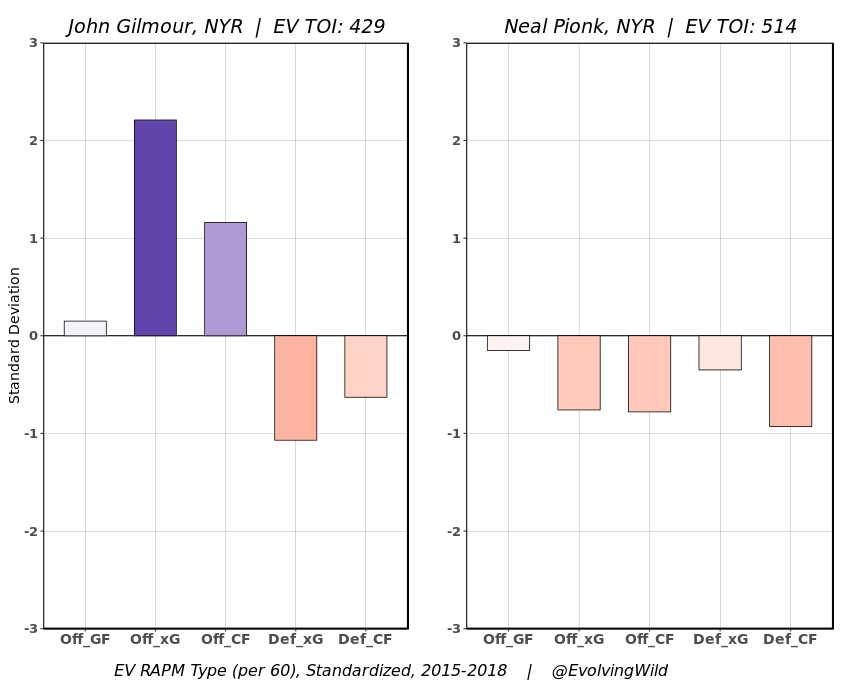 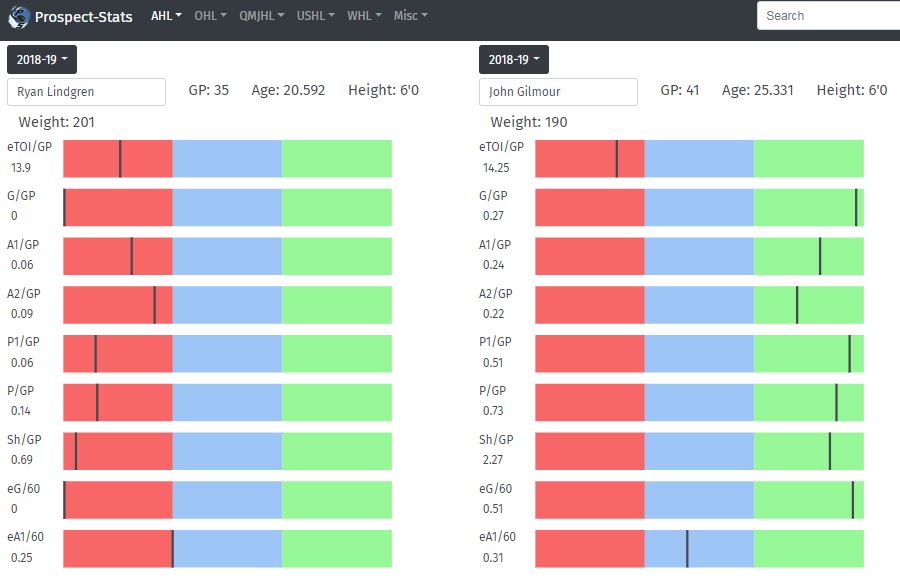 Even though Staal looks better on the below Game Control chart, this is because when he’s away from Pionk his results improve. Yes, that is how much Neal Pionk is struggling with shots: even Marc Staal does better without him. As insinuated above, the odds of NYR coaches and management suddenly moving away from Staal-Pionk seems low, so if they can’t be sat, at the very least play them less so that they can maybe find a passably effective role. 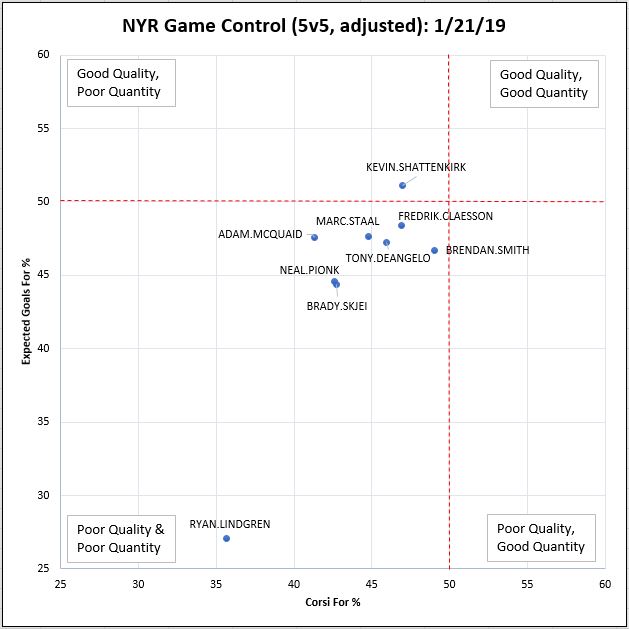 To conclude: the Rangers will lose plenty of games in the second half, especially after the sell-off of the trade deadline. This will be because the roster is not good, and that is largely out of the players control. That being said, one thing all of us fans should be keeping an eye on is if the coaching staff and management try to play the better players, rather than misusing them. That much they can control.