It’s funny what injuries can do to a club. Injuries can change a club from a Cup favorite to barely hanging on. Injuries can also change a team’s fortune, putting a backup goalie in net, showing he is actually a generational talent and keep the starting job. Both of these cases have happened to the Rangers in the past 15 years.

Most injuries, though, force coaches to play a guy they haven’t necessarily looked at in a serious starting capacity. This time around, that player is Tony DeAngelo. The injuries to Neal Pionk and Fredrik Claesson have forced David Quinn’s hand, and DeAngelo has been forced to play recently. In the four games he’s played since, he has two goals, an assist, and one assist called back on an offside review. He’s also played fairly decent hockey away from the puck while paired with Marc Staal.

Staal, during this four game stretch, has played exceedingly better, not including the Columbus clunker where no one played well. Both Staal and DeAngelo have been on the overwhelmingly positive side of xGF% and CF% the last two games, with DeAngelo tacking on a third game of great numbers against the Islanders. Long story short, these two have shown some decent chemistry together. 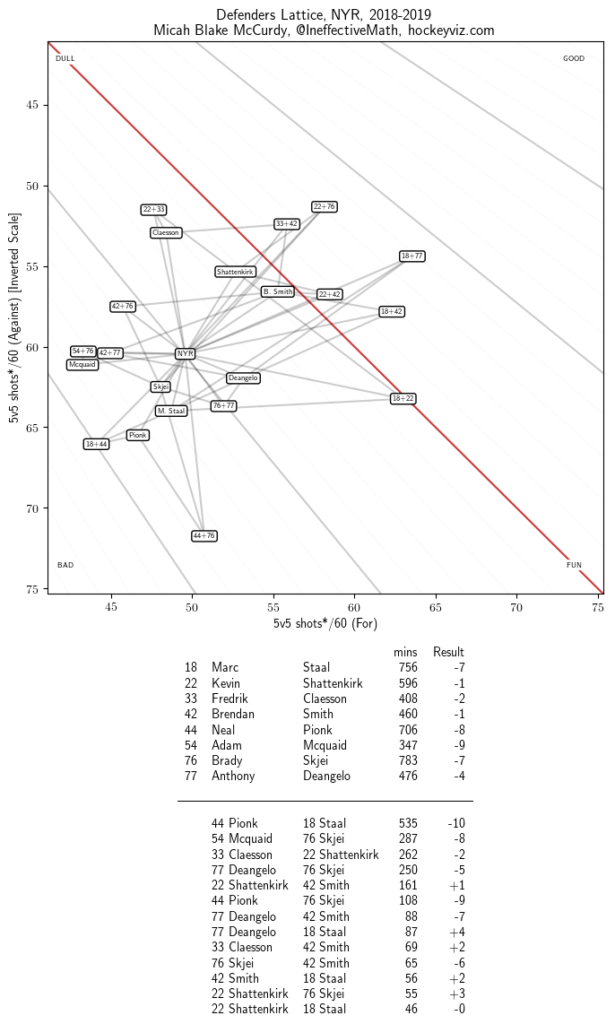 We are playing with sample sizes here, but DeAngelo and Staal are also one of the better pairings on the club, not just for each other. At the very least, their chemistry together has been worth a longer look. We certainly know that they are better than the disaster that was Staal/Pionk.

So it's been 4 GP of 2nd and 3rd pair TOI but when Pionk comes back and DeAngelo sits so Quinn and Ruff can reunite Staal-Pionk, we riot, right? pic.twitter.com/mrXlLkrNhg

Rob Luker also agrees, noting that Staal/DeAngelo significantly outperforms Staal/Pionk in every major category. DeAngelo certainly isn’t perfect, but he’s been the most capable of dragging Staal through quicksand.

Sure, it’s a four game sample. But in the vacuum of ice time, recent performance matters. If coaches can lean on “not changing what’s working,” then this certainly falls into that spectrum, right? If the Rangers are serious about DeAngelo in their future, then now is the time to see what he can do. It doesn’t have to be DeAngelo or Pionk. It can be both.