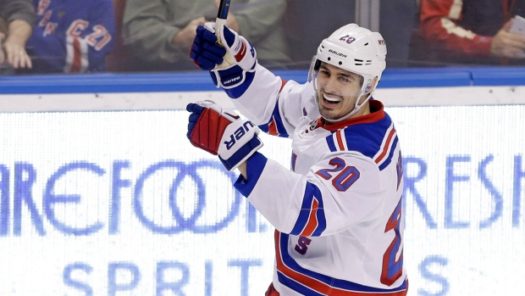 Whether you like it or not, the Rangers need to explore all possible trade scenarios. That includes that of Chris Kreider, who may bring in the most in trade value. If the Rangers trade both Kreider and Kevin Hayes, we could be looking at another significant step forward in the rebuild.

First things first, the Rangers do not need to trade Kreider. He has another year on his very affordable contract left ($4.625 million). He’s a bonafide top line player with a very rare skill set. He’s one of the fastest skaters in the league, he’s freakishly strong, he has a decent shot, and he’s excellent in front of the net with screens and deflections. The Rangers need players that are top-six capable to fill in the gaps with their elite level prospects. Otherwise they wind up in the Edmonton situation.

But if the Rangers were to trade Kreider, it is fair to expect a haul.

HSM starts things off with a good comparable. At the time of the Keith Yandle trade, Anthony Duclair was a top-50 prospect and a top-two prospect in the organization. So the return for a year and a half of Yandle at 50% retained was a top prospect, a young-ish third pairing defenseman, a first rounder, and a second rounder.

Yandle, however, is not a commodity that all GMs seek. Whether you agree or not, he had a reputation of “offense only” and “a defensive liability.” Even if that wasn’t true, it can impact trade value. Kreider doesn’t come with that baggage/reputation.

Ryan McDonagh may be a closer comparable here. Excluding the Miller/Namestnikov swap, the Rangers landed Brett Howden, Libor Hajek, a 1st, and a conditional 1st (2nd if TBL doesn’t win the Cup). That’s two solid prospects (probably both top-100, but I can’t find any old rankings), a guaranteed first rounder, and at least a second rounder.

McDonagh, like Kreider, didn’t come with baggage or a potential hole in his game. He was an established top pairing defender, in the way Kreider is an established top line forward who is well on his way to a 30-goal season (he would have had 30 in 2016-2017, but finished with 28 goals in 75 GP, a 30-goal pace/average).

A team acquiring Kreider is going to need to give up a lot to land him. A top line player who can put up 30 goals at $2.3 million (50% retained) is a major asset to any competing team.

All that said, the Rangers do not need to trade Kreider. It’s the exact opposite situation with McDonagh, where the Rangers really did need to trade him to go all-in on the rebuild. With Kreider, you have a guy that can be that next clubhouse leader. I know intangible are hard to quantify, but the fact he speaks Russian is going to come up a lot. Vitali Kravtsov and Igor Shestyorkin are on their way to New York sooner rather than later. Pavel Buchnevich is here already. Making these kids comfortable is an important aspect to growth.

At this current juncture, there is no wrong answer with what to do with Kreider. It is always better to trade a player a year too early (like the Blueshirts did with Derick Brassard) than a year too late (like with Dan Girardi – which led to a costly buyout). These are the difficult decisions that do not make me jealous of Jeff Gorton’s job. However if he’s given an offer he can’t refuse, then there shouldn’t be anything holding him back from pulling the trigger.