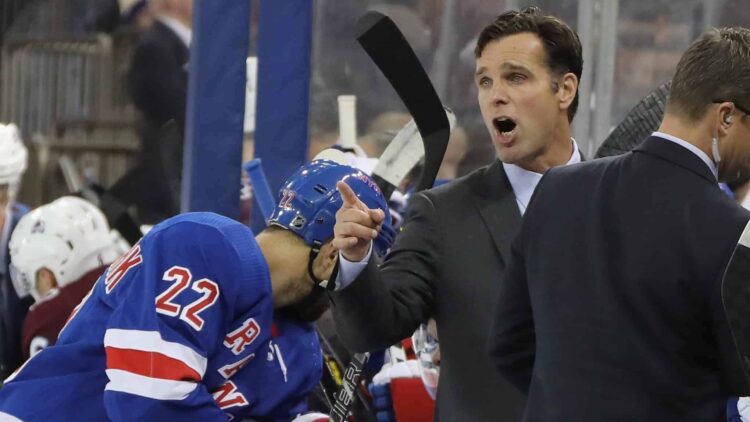 When David Quinn was brought in, he was supposed to be a fresh voice that ended all this. Now to be frank, this stuff doesn’t end overnight. It’s virtually impossible to do a complete 180 like that and have it be successful. Transition periods are needed.

But first let’s focus on the low hanging fruit: Lundqvist and his playing time. Lundqvist had a poor outing against Pittsburgh, and took on the blame himself. Quinn was quick to say that Hank shouldn’t have started that game. Lundqvist has started 30 games this season, leaving nine for Alex Georgiev and other backups.

In a year the Rangers are competing, that’s a completely normal workload. Or if Lundqvist was 27 and not 37 years old. However Lundqvist is 37 years old and the Rangers are not truly competing (if you think otherwise, I have a bridge to sell you). This workload is shortsighted and best and irresponsible at worst. Georgiev starts tonight in Colorado, and should be getting at least 40% of the starts going forward.

Now for the tough stuff. It is inexcusable for the Rangers to continue playing poorly performing veterans who have no future with the club regularly when players like Filip Chytil are on the bench. A scratch here and there for learning experiences is fine. Scratching Jimmy Vesey in the same manner is fine too. Accountability is good. Dressing someone because they are a grizzly veteran is outdated.

The above is tied to in-game adjustments. Poor performing players should be shifted around, something we saw regularly –if too much– under Alain Vigneault and perhaps not enough yet under Quinn.

Both of these points are significantly more difficult to manage, as there is a healthy balance between playing time, growth, and the need to dress bodies. Cody McLeod is a body, he plays 8-10 minutes a game. He doesn’t do it all that well. But he’s a body, nonetheless.

The decision was not McLeod or Lias Andersson, despite what some may tell you. The sign of hope is that Boo Nieves got the jump to the third line while McLeod stayed on the fourth. Nieves beat out Andersson for that spot. That is what it is, and there shouldn’t be any huge qualms with how that played out.

The bigger issue is the continued scratching of Tony DeAngelo, a kid the Rangers invested highly in when they shipped off Derek Stepan. DeAngelo is not a perfect player by any stretch. However the tired excuse that he is bad in his own end is based on reputation and not logic.

Let’s be real. Every single Rangers blue liner is terrible in their own zone. Not one of them is good, at least not this year. Scratching DeAngelo because the Rangers gave up 40 shots to St. Louis was a, bluntly put, stupid move. The Rangers were equally bad against Pittsburgh, giving up a touchdown because the goaltending couldn’t bail them out of this one.

If the defense doesn’t stop anything. Nothing changes when the veteran presents of Adam McQuaid, Marc Staal, and Brendan Smith are in the lineup. Continuing to scratch DeAngelo, someone the Rangers should, at the very least, be analyzing regularly to see what they have, is asinine and downright irresponsible from an asset management standpoint.

However that is not a fluid situation either. McQuaid acquisition was questionable, but there’s a chance he could be traded by the deadline. Smith isn’t as a toxic asset the way some folks make him out to be, and if the Rangers can exchange Ryan’s Spooner for Strome, then Smith can surely be dealt in a similar fashion.

This is a rebuilding year for the Rangers, but it is also a year where they can accelerate the rebuild with shrewd trades. There is a healthy balance, but it seems the Blueshirts are focusing more on the trade deadline and building trade value than on development.

But if the above were true, then Kevin Shattenkirk would be on the powerplay.

There is no rhyme nor is there any reason to the way the Rangers are being run at the moment. That lack of consistency, and perceived lack of a plan, is perhaps the most frustrating aspect thus far.