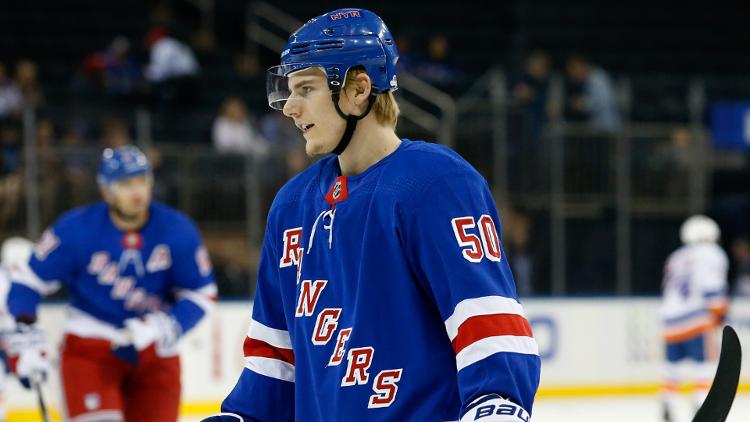 When it comes to the preseason, the biggest thing is evaluating young players’ potential, and in very limited cases trying to determine whether veteran players, especially those who didn’t perform well the prior season, are going to rebound. This makes intuitive sense more or less, because while we’re not necessarily concerned with Chris Kreider’s ability to smoke flat-footed defenders down the wing, we do want to know who made progress in their most formative hockey years.

Last preseason Lias Andersson didn’t look especially noteworthy in his September exhibition games, but he had a great World Juniors and looked like he could hang in his NHL tryout at the end of last year’s lame-duck campaign. He exploded last night, scoring an excellent shorthanded goal that was borne of presence of mind and pure aggression with a clinical finish, and later notching a power play goal with his knack for being in the right place at the right time. Broadly, he looked sharper, more like an NHLer, and ready to compete for real this time.

A corollary to this is the way we use the preseason to test hypotheses about individual talent progression among players who aren’t technically prospects but haven’t quite broken out yet. Pavel Buchnevich is who I’m referring to here, but Brady Skjei’s entry into the NHL fits this mold, as did Kevin Hayes in a certain way. With these kinds of players we want to see what they’ve got and if they’re ready to step up in the coming season, hopefully elevating their talent long-term. Buchnevich had an standout game last night, looking poised with the pass on that OT winner and showing willingness to just blast it away on his goal earlier. Preseason performances like that tell us when we should keep an eye on someone optimistically, piquing our interest and signaling that this could be a nice year for a particular player.

In the case of Skjei a few years ago, he struggled in his first preseason games and his initial call up. He made sloppy plays, had questionable gap control, and just generally looked out of place. Still though he had that underlying talent that we’ve come to know and love. He demonstrated his smooth skating and crisp passing, and after a bit of an adjustment period –that was maybe exacerbated by his deployment and a flawed system– Skjei became an NHL defenseman.

So what’s the lesson here? Well, it may seem obvious, but take the preseason, and maybe the first month of so of the regular season, with a grain of salt. This sounds normal, but I think it’s worth unpacking a bit what exactly that means.

With hockey, we’re all reactive at heart, it’s just the nature of the sport. Sure, we come into each game with pre-conceived notions, valid or invalid, and thoughts about what’s going to transpire. We’re all prepared for when a goal gets scored, we’ve felt these things before. Not really though as it turns out – when that goal is scored, especially a big one, the feel still captures us in the blink of an eye. That’s part of the excitement, in that you know how it feels and you feel it anyways. You can’t help that Dr. Hockey just whacked you in the soft part of your knee with that weird hammer.

Sitting on our couches, we ooh and ah at what’s going on as it happens, sometimes muttering play-by-play as we go, sometime interjecting sporadically with cries of joy or dispute. So it’s natural then, that our bigger picture perspective is shaped by this same reactive sensibility. It’s already in our head, the default mode of thinking that’s so fundamental as to not even rise to the point of self-awareness.

This is why I want to parse out the different kinds of salt we should be seasoning our opinions with as it were. For example, Buchnevich having a good game last night and Lindqvist being relatively invisible don’t really mean the same thing. Ditto for the chemistry, or lack thereof, shown in early October and potentially even November. A prospect and a young-but-established roster player should not get graded on the same rubric.

Which brings us back to Lias. He played great the other night, showing development from his experiences last year. But he’s going to have bad games. He’s not even of drinking age in this country. He’s going to make mistakes and he’s going to get beat. Still, that doesn’t change the indication of progress that we’ve seen from him thus far. Of course, continuing this progress would point to the idea that it’s happening faster than we anticipated, or vice versa, maybe even leading us to reconsider where his ceiling or his floor are. It’s a complex calculation, but it’s a different situation than a guy like Buch.

Buchnevich has been much hyped for a while now, and even an avowed fanatic like myself will admit that it’s a big year for him. He’s shown tons of promise qualitatively, and it pops up in his numbers. This year we want to see refined talent and unmitigated success. To do that, quite simply, he’s got to elevate consistently. So when we consider his preseason performance we can say “well, it won’t happen quite every night, but there’s a higher standard to reach here.” He’ll have bad games too, just like Lias, but we’re not tracing the same arc. That kind of game needs to happen more often, and it means something different when it happens.

Skjei is an interesting case, because we all knew he had the talent when he came up through the ranks. His toolkit was fairly simple (good passing decisions and smooth skating) but already very developed. Still, it wouldn’t be too harsh to say that he sputtered his way onto his current plane of existence. It was probably nerves, maybe just a slow level of adaptation, whatever. The NHL is the best hockey league on the planet, and it isn’t particularly close. Professional sports are hard. He turned out fine though.

So when we look at say, Tim Gettinger, who boldly wore 97 last night to put some random Edmonton Oiler on notice (I loved the move, because nobody owns any particular number, league-wide unofficial retirements be damned), and his performance last night, we should maybe be a bit more forgiving. Just because he only had a couple of plays that rose to the level of decent (at least in the time I was watching) and no real highlight reel sequences, doesn’t mean he can’t make the NHL. He might even be a pretty good NHL player. He might not be, but it won’t be because of one preseason game where he was simply alright.

What I’m getting at here is something we all kind of know, which is that one preseason game is a small sample size. That’s not to say it can’t be indicative of certain things, but it’s important to consider what it’s indicative of. Even as we get into the regular season, it’s important to remember that the way it is now isn’t the way it always will be, and that fortunes can change steadily over the course of 82 games or even the course of a week. I’m not sure if you can remember how 2013-14 started, but it wasn’t with a Stanley Cup Finalist caliber performance. It’s just a preseason game, but we can still learn things. Be careful about what you learn though, the caveats you place on those conclusions, and your analytical posture.

We’re all just kind of reacting at this point, but some reactions require more introspection than others. When a guy stands out in a preseason game it might mean he’s the real deal, or it might mean he’s a flash in the pan. That goes for more disappointing performances too.

I’m personally inclined to believe that good play in preseason is more telling of talent than bad play is telling of a lack thereof, but you may differ and that’s ok. Especially right now, with where the team is at, we’re going to see a lot of different things going on in any different game, any different week, or any different month. It’s incumbent on us though to be discerning and self-evaluative as fans, in order to elevate this community and grow our mutual appreciation for the game. Or not, because I love yelling at the TV as much as the next guy too.