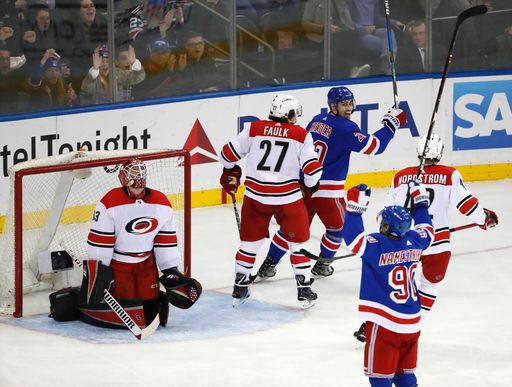 Much ink was spilled at the time of the McDonagh/Miller trade about the return the Rangers received, with a particular kind of focus placed on Vlad Namestnikov. The rap on him was the he was a passenger simply riding the coattails of Steven Stamkos and Nikita Kucherov, that we got fleeced insofar as the deal could be divided up into McDonagh/prospects and Miller/Vlad, and that long-term it would turn out to be a mistake.

I’m not really going to say these conclusions are totally baseless. It’s true, JT Miller was a solid scoring talent, and the numbers bear out somewhat that Namestnikov had a certain bump from his linemates. As far as trade evaluation and roster building goes, that requires some broader context I think, and reasonable people can always disagree of course.

The biggest thing here I think is the issue of who he played with. We have a ton of data in terms of minutes for Vlad with Stammer and Kuch, but unfortunately he only played about 50 minutes with each of the two lines he found himself on in NYC (Zucc/Vesey and Buch/Vesey), so the analysis is going to be a bit limited. The good news is that JT Miller played a decent amount of time in Namestnikov’s place on that line (although it’s worth noting that with Vlad we’re only looking at regular season numbers, and with Miller we’ll be combining both regular/postseason data to widen the sample size to a meaningful level). Still, it’s an interesting little examination of the whole “Vlad was riding the wave/Miller was the real deal” discrepancy.

So to start, another caveat is that Namestnikov played 507.92 minutes with his aforementioned TB top-line team mates, while Miller played 225.5 minutes with that same dynamic duo. With Vladdy there that line had a 2.1 relCF%, while the Miller iteration had a 1.23, so it might seem that the former was a better combo actually. Not exactly though, because while the original line’s relCF% was better than the new and improved post-deadline version, Vlad/Steve/Nik (not sure if those are actual nicknames but just roll with it, ok?) had a -3.1 relxGF% and after Jonathan Tanner slotted in, it was a positive differential: 1.67%.

As far as actual point production goes the two Russians and Stamkos had 29 goals for and 23 against, while the slightly more American combo was an even 10/10 GF/GA. All numbers here are at even strength, so the PP was likely a bit more productive with ol’ number 10 involved, but that also requires a closer look I think, and that’s just not what we’re about today. Those 225.5 minutes with Miller involved a 98.4 PDO however, while the 507.92 with Namestnikov was an little bit elevated at 102.32. This adds a caveat indicating that perhaps Miller Time was at root better hockey than whatever Russian drinking metaphor we could use here.

Still, I guess what I’m saying is that the distinction between the pre- and post-deadline Lightning primary scorers was not so clear cut – what they picked up was a bit more Miller Lite than High Life, to keep with the metaphor. Intuitively that’s not surprising really, because unless you stuck another 90+ point forward on line with talents like Stamkos and Kucherov it’s only going to move the needle at the margins, and even then there’s no guarantees.

Now that we’ve gotten that out of the way, there’s more numbers I’m going to dump on you, this time as a way to compare Namestnikov to scorers we all know and love, including the dearly departed East Palestine, Ohio native we sent down to Florida. To start, Namestnikov played more minutes than anyone else we’ll be looking at aside from Miller himself; Vlad had 1089.5 TOI last season, Miller had 1112.88, Kreider (our high end comparable) had 722.72 due to injury, and Buchnevich (who’s the lower end boundary here) had 882.88. Before swimming any deeper I want to point out something that maybe jumped out at you or maybe didn’t: Namestnikov only played about half of his minutes with Stamkos and Kucherov. Obviously 50% is actually a pretty huge number still, but it’s not as though his numbers were entirely driven up by his linemates. Make of that what you will though, I leave it up to you.

Yeah, that’s alarming, because it means that while the other three guys got the goal or the first helper for the most part, Namestnikov was often collecting secondary assists. To me, that’s the biggest piece of evidence indicating Namestnikov was just a passenger on that line. If his primary point scoring rate were closer to his all-inclusive points per 60 minutes ratio it’d be a fine trade, but the fact that he only got the primary point 58.75% of the time when converting minutes to points on the score sheet is concerning.

Just for reference, with Miller that number is 73.77%, Kreider’s is 68.30% (I’m willing to give him the benefit of the doubt since he had an entire rib removed for the latter half of the season and was coughing up blood during the first half), and Buch’s is 76.83% (once again, why he shines bright as a breakout candidate for this year). Now I’m wondering what the average P1/60 to P/60 ratio is for every player in the NHL actually, but that’s too much math for today – maybe I’ll learn data science or something (Conor McDavid’s is 2.3/3.2 or 71.875%, but I’m also willing to bet that his secondary assists are a lot more important than Namestnikov’s on a qualitative level).

For the fancier crowd, pinkies out, Namestnikov’s relCF% was pretty good at 2.4%, but not as good as Buch’s or Kreider’s (3.52% and a whopping 6.77% respectively). That is still better than Miller’s 0.2% (these numbers, as with the points and rates, are all regular season), though.

The relative scoring chances percentages, represented by Corsica’s expected goals for –maybe my favorite metric because it’s essentially Vally’s video scoring chance percentages except done totally comprehensively by a computer that doesn’t misjudge things– are a bit bleaker, but not in the way you might think. Namestnikov’s relxGF% is only 0.84%, which is not great, and again Buch and Kreids outstrip him by a lot, but this time only Miller by a relatively small amount. Those three put up a 2.62 relxGF%, a 7.86 relxGF% (Kreider is really, really good) and a fairly pedestrian 1.75 relxGF%.

This is another reason why I maintain Buchnevich will be the playmaking primary scorer of the future and go on to put Miller, maybe even Zuccarello to shame, but I digress. The point of these ratios is that Namestnikov is not entirely terrible, is substantially better than Miller in terms of pure shot attempt production for/against as a percentage, and only kind of worse than Miller as far as that same perspective with weighted scoring chances. Remember also that these numbers are relative to teammates, so it’s not as though they’re inflated or diminished by how good the team/line they were on goes – they’re fairly indicative of actual on-ice performance beyond the box score.

Contextually there’s a couple of things worth taking a look at as well. We’re going to be looking at Quality of Teammate (QoT) and Quality of Competition (QoC) numbers in terms of shot attempt percentages rather than time on ice, because I think that’s slightly more telling as far as what’s going on down at ice level. Obviously there’s a lot that’s imperfect about this particular angle as well, but it’s not bad, and again, I’d have to take up coding to give you really next-level context. Anyways, here goes.

Namestnikov had the highest quality of teammates by CF%, which is no surprise when you actually think about who those team mates are, at 50.61%, and the second highest quality of competition, 50.01%. Buch, Kreider, and Miller had QoT CF%s of 46.85, 45.4, and 47.8 respectively, which, among other things again underscores how lucky we are to have Chris Kreider. This means Kreider is doing most of the heavy lifting. For reference, Mika Zibaejad’s was 44.89%, which might indicate that it’s Kreider, then Buch, then Zib in that order as far as performance goes, but obviously that’s just one limited metric of measuring how well each player on a line is playing and in any event, they’re fun so who cares?

Quality of competition for the rest of them is a different story, and counts for another mark in Namestnikov’s favor. As mentioned above, Vlad’s QoC by CF% is 50.01, which was the second highest QoC to Kreider.

To put it all together the ranking of competitive quality from most difficult to least difficult goes Kreider (50.23), Namestnikov (50.01), Buchnevich (49.97), and Miller (49.86). As far as teammates go, from best to worst it’s Namestnikov (50.61), Miller (47.48), Buchnevich (46.85) and Kreider (45.40). Again, what to make of it all is up to you, but I think if we’re saying Namestnikov had it easy that’s not entirely true – he had great team mates sure, but he was also playing the second toughest minutes of anyone, so there’s that. The only really clear cut conclusions we can draw here have to do with Chris Kreider, who, if I haven’t mentioned it before, had a rib removed and still managed to play a professional sport within a couple of months.

Alright so that’s a TON of numbers for you to take in, but I hope I’ve done the mama-bird thing well enough and chewed it up first to the extent that you can swallow it all down. So, to recap, Namestnikov is a pretty decent point-getter, but maybe a bit of a bystander as far as the action goes due to his P1/60 to P/60 ratio. He’s pretty alright as far as his shot attempt and scoring chance tilts go relative to his teammates average, and it’s fair to say that in broad strokes, he can hang. Contextually there’s a lot going on, but let’s not forget that at the outset his numbers were only sort of pumped up by his linemates, with the question of whether the same thing would have happened to JT Miller over a full season hanging in the air like the smell of sweaty hockey pads.