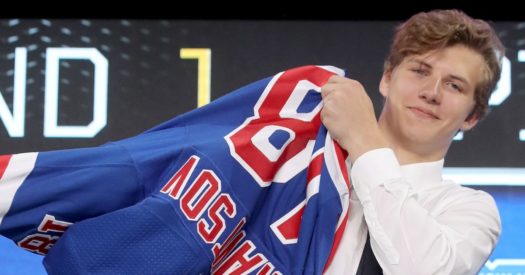 Happy Friday, BSB community! Last Friday evening, the Rangers embarked on the organization’s most important Draft in quite some time.  Seven rounds worth of picks (10 total) and a couple of trades took place, which made clear the team is maintaining a long-range view with their re-build strategy.  No big splashes, no connections to pricey free agents, just a pure drafting and developing strategy.  As you can imagine after all that, I have some thoughts…

1. On the day of the Draft, I wrote an article on what was at stake for the organization.  The two things I wanted to see was a clear organizational philosophy about how to move forward with the re-build and to see some prudent asset management.  I think we got shades of both of those things.  I think the organizational philosophy is pretty clear long-term, but not so much in the short term.  All three first round picks are at least a year away from The Show and the Rangers did a pretty decent job of trying to swing for elite talent.  Asset management evaluation was a little difficult because the Rangers only made two trades, both pick for pick moves involving no NHL players.

2. I would normally be a little down on the price required for the Rangers to move up to 22 to take K’Andre Miller, but if they were certain that the Ducks were going to take him at 23, I don’t mind ensuring they get their guy.  From all accounts, Miller is a tremendous athlete that has the tools to be a superstar if he can put it all together.  There were definitely more polished players available in that spot, but I like the Rangers shooting for upside here.

3. More or less the same analysis for the Kravtsov pick.  I personally loved Oliver Wahlstrom in that spot, but I’m ok with the risk if you are able to get a star player out of it.  I think Wahlstrom will be a really nice top-6 player, but if Kravtsov really has 30+ goal/70 pt upside, I like the strategy there.

4. We have all been complaining for the last few seasons about the lack of elite talent for the Rangers to build around going forward, but if they are able to hit here, between Chytil, Miller, Kravtsov and Shestyorkin, that is a solid core of elite ceiling players. Especially with solid above-average regulars in Andersson, Day, Hajek, Howden, Lindgren, etc.  Obviously, all these guys won’t all be Ranger regulars, but it’s a really nice foundation of prospects. This is to say nothing of younger NHL players like Buchnevich, Zibanejad, Kreider and Skjei.

5. The biggest question for me comes on the evaluation side.  It’s all well and good that the organization is telling us that these guys were specifically targeted, and the internal evaluations had them taken where they were.  The problem I have is the possibility that the organization was just plain wrong. Did they try to get too cute when the consensus of reputable scouting minds had another player above them? The team has a mixed development record of the past decade or so, so I don’t necessarily give them the benefit of the doubt.  After additional research, I do like the skill sets on the players that the Rangers’ drafted, but it is a lingering doubt about the process leading up to their selection.

6. Ok, let’s talk Olof Lindbom. Woof.  Honestly, I have no idea if the kid is a good goalie or not.  Before he was drafted, I’d never seen so much as a photo of him, but that isn’t at all the point.  The point is you took a position of strength for the organization, that is a complete drafting crapshoot to begin with, and wasted a second-round pick on him?  I dug some video up and nothing really stood out to me.  If anything, his problematic habits were the most notable part of his game. I’ll do a full scouting report on him at some point in the future when there is more video available, but even if Benoit Allaire was absolutely in love with the kid, he was the fifth ranked European goalie and literally the first goalie taken in the entire draft. The pick is pretty indefensible.

7. Shifting away from the Draft for a moment, I don’t think the Rangers are finding nearly the value they expected for their RFA’s.  Teams are seemingly wise that Spooner is sneaky old and Namestnikov’s production really suffered away from Stamkos and Kucherov.  That and Vesey being pretty bad in general has not produced useful futures as many had hoped.  That being said, as Dave pointed out in his recent post, the Rangers do have a roster to fill and it needs talented players.  No reason not to sign these guys to short-term deals and run them out there.  They could have more value at the deadline if they are performing or if teams get desperate for forward depth heading toward the playoffs.

8. I think the Rangers should be looking at project players in UFA this year.  Nail Yakupov and Anthony Duclair immediately jump to mind.  There is really no downside to seeing if these types of players can find their form again.  Could make for a nice long-term addition or a deadline asset to flip for more futures.

9. Another free agency note.  Apparently the Rangers are interested in Ryan Reaves. It’s not really a big deal, either way.  We are talking about a 4th line winger here, and he is a better player than Tanner Glass/Cody McLeod.  I guess I would have liked to see the organization shift away from this philosophy of needing a quasi-enforcer. I understand the NHL is a copycat league, but I don’t think Vegas is a good model for this.  It’s going to be very difficult to replicate the galvanizing motivation of being a group of guys other teams cast out.

10. I do wonder what Henrik Lundqvist thought on this Draft.  I’m sure the organization indicated to him the types of players and time horizons they were targeting, but I think it would hit you a little differently once you realize that there is pretty much no help coming for you this year.  Lundqvist is a competitor through and through and I wonder how he will process what amounts to a lost year at age 36.

11. This has been one of the more exciting prospect camps in recent years, as well.  A lot of serious talent is in camp this season and I think watching these younger players is the best way to get a fanbase excited about the future.  I would like to see MSG begin to broadcast some of this stuff going forward, especially as these kids get closer to The Show.  They have an opportunity to really market this next generation and endear the Garden faithful to this new crop.  The NHL sucks at marketing, though, so I am not really getting my hopes up.

12. I’ll be interested to see how the Rangers handle their little Red Army going into the season. Word on the street is that Kravtsov has an out clause which would allow him to come to North America this season and begin his career in the AHL, otherwise, he will have one more year before his KHL contract is up.  Across the pond, Yegor Rykov will be able to come over after this season; ditto Igor Shestyorkin.  How the young Russians are integrated and brought into David Quinn’s lineup will be interesting to watch develop.

13. The Rangers balanced some of their high ceiling picks with a few high floor guys, as well.  The first (and third 1st round choice) was Nils Lundkvist with the 28th pick.  I don’t mean to sell Lundkvist short, he has the chance to be an impact player on both sides of the puck, but he was more polished than many other available options.  Same with third rounder Joey Keane.  Now, I am all for shooting for the moon for talent the later rounds (which the Rangers did with Lauri Pajuniemi and Riley Hughes, in particular), but it’s nice to see the team target guys who project as solid complimentary players at worst when rounding out their draft philosophy.

14. The overall theme with these selections were guys who are capable of physical play, but don’t necessarily focus on it.  I think that is a good line to ride.  These kids still need to grow into their bodies, so that is an always evolving concept. It does seem that the organization focused on leadership skills and a willingness to engage the play in meaningful way, rather than skilled players who can be passengers.  I think these types of discussions get distorted because it becomes all or nothing and a perceived lack of “determination and toughness” becomes the scapegoat for a team that just wasn’t good enough, but I like the skillsets targeted here.

15. Overall, I think the Draft was very similar to the trade deadline.  The Rangers didn’t seem to make any catastrophic mistakes (aside from maybe Lindbom with guys like Ryan McLeod and Bode Wilde still on the board), but they got solid value from what they did.  They didn’t light the world on fire, but it seems like they have set themselves up for a future foundation of very good players.  There is still a lot of offseason left and the full picture of how the rebuild starts to develop probably won’t really take shape until 2019-2020, but overall, they are off to a pretty good start.