Thoughts on the Rangers’ draft 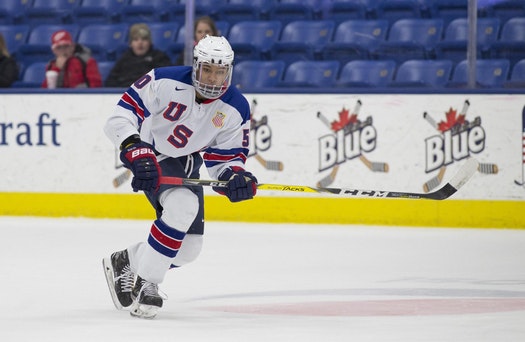 The 2018 NHL Draft is behind us, and the Rangers made ten total selections, with one trade to move up in the first round. Josh is going to have a full breakdown of each pick later this week. This lovely Sunday is best spent, at least for me, running through the picks at a high level and the overall draft strategy. I have some thoughts.

1. First things first, the Rangers really nailed the first round. I wanted Oliver Wahlstrom, but that’s my personal preference. Vitali Kravtsov wasn’t falling to 22 or any other spot the Rangers could realistically trade up to, so let’s eliminate that thought. Kravtsov has an elite level ceiling, and he lit up the KHL playoffs as an 18 (!!) year old. He has one year left on his KHL deal and has said he’s coming to North America after. This kid is legit.

2. The price to move up to grab K’Andre Miller was high, costing the 26th and 48th picks to move up four spots, but Miller is just a physical specimen. He has elite speed already, and has shown an ease in transitioning from forward to defense. He’s raw, but he’s committed to Wisconsin where he will refine those skills. If he even scratches the surface of his ceiling, he’s a top pair defenseman.

3. Nils Lundkvist was the finally first round pick, giving the Rangers players named Lundqvist, Lundkvist, and Lindqvist. I’m going to screw that up at some point, so sorry in advance for that. But Lundkvist is a smooth skating Swedish defenseman who, while doesn’t have the offensive upside you may want from a first round pick, is just overall solid in all three zones. He’s someone who will make the smart play in the zone and transition to offense.

4. The only pick I really didn’t like was Olof Lindbom in the second round. It has nothing to do with Lindbom, whom I hear Benoit Allaire was elated the Rangers got, it has to do with when he was taken. There was a lot of potential top-six talent on the board, and the Rangers grabbed a goalie that most likely would have been there in the third round, especially in a position that is already stacked in the pipeline. Aside from that, Lindbom was a highly ranked goaltender. I see nothing wrong with the player, just with the time he was selected.

5. I don’t know much about the remaining picks. Josh will be able to provide more details on those. I will say that I like the Nico Gross pick. Joey Keane had good possession stats. Also Riley Hughes was a one of Corey Pronman’s top sleepers. So I do want to highlight those.

6. There was a lot of outrage about Day Two, and I understand why. The Rangers went off the board with Lindbom, and selected a bunch of guys that weren’t on anyone’s radar, at least on social media. I don’t like the Lindbom pick, but I’m going to defer to Gordie Clark on this. He’s got a pretty good track record, although some recent history is starting to tarnish it.

7. That recent history I’m talking of? The 2014 and 2015 drafts were disasters, with just Igor Shestyorkin (2014 4th) and Adam Huska (2015 7th) still with the Rangers in high standing. Shesty appears to be the heir apparent, but Huska has been pretty solid so far. The Blueshirts also took Aleksi Saarela in 2015, so in theory that’s not a bad draft, but Saarela isn’t with the Rangers anymore.

8. Folks are looking at the 2013 draft as a failure, especially since Adam Tambellini won’t be qualified. That’s the draft that landed Pavel Buchnevich. There is a legitimate argument that outside of top round picks, Clark hasn’t really hit on a mid or late rounder –aside from Buchnevich– since Jesper Fast in 2010. Part of that is lack of picks. But 2016 has Tim Gettinger and Ty Ronning in Hartford, both looking to have promising futures. The conversation changes if those two hit.

9. The Blueshirts really needed high end talent, as their NHL roster is filled with young depth. They now have that high end talent in Kravtsov, Miller, and Filip Chytil. Lias Andersson will likely be a middle-six forward as well. The Rangers have swung for the fences with three of their five first round picks. Hopefully they all pan out, but it’s tough to argue with that strategy.

10. As for the overall draft strategy, I fully believe in best player available, no matter what. It looks like Clark and company altered their strategy a bit for this draft. The Blueshirts went defense heavy, complementing the prospects acquired at the trade deadline. Defensemen take longer to develop, so it appears the Rangers are gearing up for 3-4 years from now, not the immediate future. Next year could be a rough one, but it’ll be fun watching the kids play.