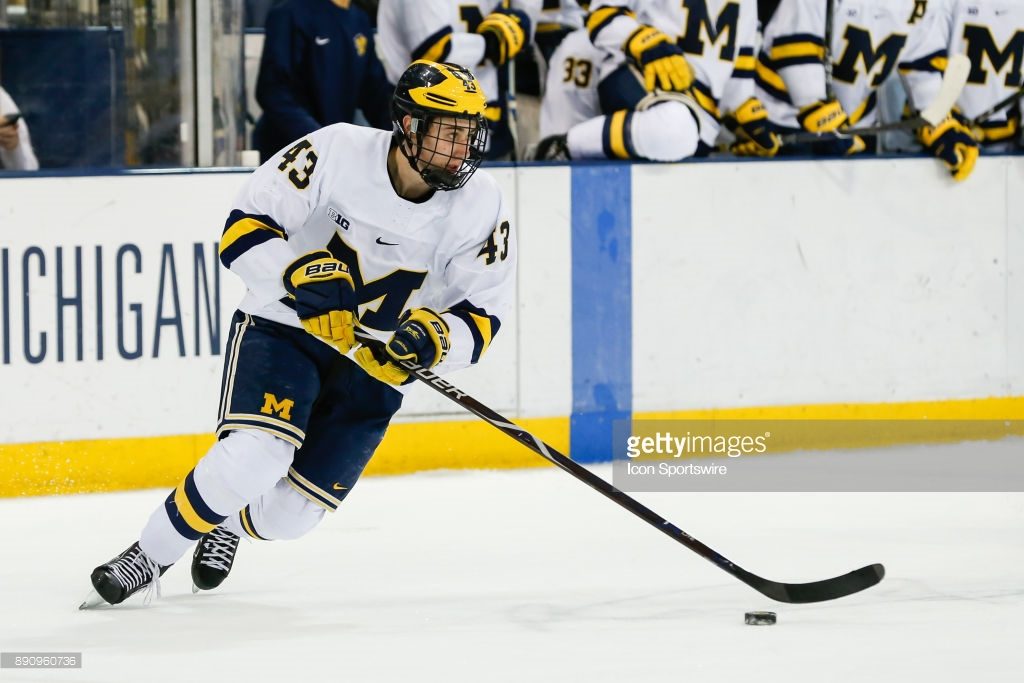 The Rangers have the 9th overall pick this year, their second straight year with a top-ten pick (trading Derek Stepan to land the 7th overall last year). This draft is a deep draft, as you really need to try to screw things up to not land a top-six or top-four talent in the first round. In the top-ten, the Rangers should, in theory, get a kid with the potential of playing on the top line or top pairing.

The difference between the top three and the top ten is NHL readiness. The top three are NHL ready, the rest need time. We looked at Oliver Wahlstrom already, who is my preference if he slips to the Rangers. If not, there are plenty of others who are worthy of a pick, like defenseman Quinn Hughes.

Hughes, a left handed defenseman who just finished a monster freshman season at Michigan, is one of the top defensemen in the draft.  Hughes is a great skater with offensive instincts, and it shows in his 5-24-29 line with Michigan this year. His vision on the ice is top notch, which allows him to distribute with ease and poise.

Hughes’ strongest asset is his passing. He is almost always tape-to-tape, threading needles when needed. He is also incredibly calm and controlled with the puck. The game just slows for him at the NCAA level. You’ll rarely see him panic with the puck when pressured, which again contributes to his stat line.

His shot isn’t at the Wahlstrom level, but that doesn’t mean it’s a bad shot either. He has a deceptive release and a surprisingly heavy shot. He doesn’t use his shot as often as you might like, but that doesn’t seem to impact his ability or production.

As for his own end, Hughes has solid positioning. When you combine his positioning with his skating and agility, he’s tough to blow by on a rush. He’s not an overly physical defenseman, and at 5’10” and 170 lbs, he does lose physical battles in front. However he makes up for that with timing on his challenges at the blue line and relative sneakiness, forcing turnovers and quickly transitioning to offense.

Hughes’ ceiling is a top pairing defenseman who can run a powerplay with the best of them. His 170 lb frame will get bigger, so as he transitions to the higher levels he shouldn’t lose battles in front as often. Hughes is a kid that can control the pace of a shift/game just by letting him manage the transition and offensive zone. The Rangers need a 1LD with Ryan McDonagh gone. Hughes could be that guy.