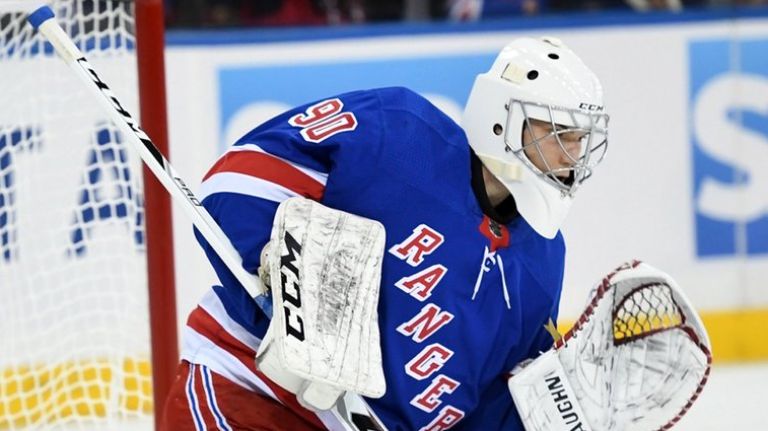 No, this isn’t a post about Henrik Lundqvist. So Hank haters need not apply. When the season started, though, the Rangers were set with Hank in net as the starter and Ondrej Pavelec as the backup. It was a risk, but it paid off as Pavelec –after a rough start– started to show that he was a fairly capable backup. If not for some odd obsession with starting Hank every effing game, Pavelec would have seen more action.

Then the knee injury happened, basically shutting him down for the season. Up came Alex Georgiev on February 9, who basically sat on the bench for a while before getting his first start on February 22. He got back-to-back starts, stopping 90 of 97 shots. It was an impressive debut on a team that bleeds gives out more shots than LMFAO.

Georgiev’s success gives the Rangers an interesting conundrum for next season. Before his injury, all signs pointed to Pavelec getting re-signed and serving as the backup. Let’s assume that would cost the Rangers his current $1.3 million salary. Not exactly expensive, and for a team with cap space, a luxury they can afford.

The other option is have Georgiev back up Hank on his current ELC at just over half that price. The price doesn’t necessarily matter here, it’s all about performance. Georgiev is younger and has played better, at least in the short term.

The most realistic option is for Pavelec to serve as the backup for one more year, and have Georgeiv get the starting role in Hartford. It ensures the Rangers don’t rush the kid, and that he gets more playing time to hone his craft. Of course, in the NHL he’d have Benoit Allaire, so there’s some give and take here.

There is one option that will be popular but will leave people disappointed, and that is signing Pavelec with the sole purpose of flipping him at the deadline. I’m all for that option, as long as we are all on the same page that he, at best, fetches a mid-late round pick. For starters he doesn’t have a good track record, which impacts his trade value. Most importantly, though, is that the goalie trade market stinks.

It’s kind of funny, actually. No one expected the Rangers to have a goalie dilemma at the start of the season. Nor was it expected when the trade deadline was looming. But here we are, with a goalie dilemma. I, for one, am enjoying it. Competition breeds improvement.