How Not to Rebuild: Arizona Coyotes Edition 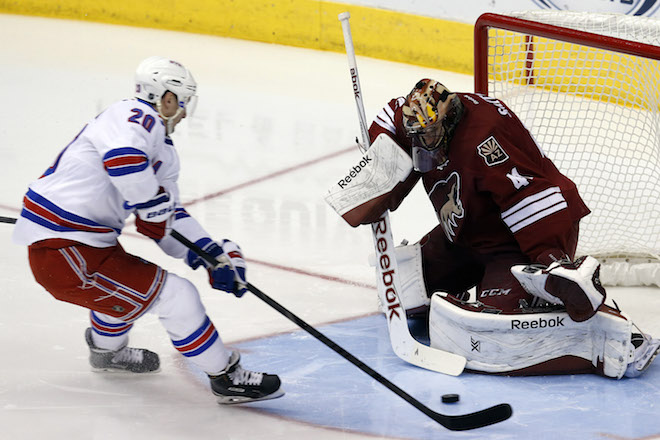 Welcome back all to this week’s edition of How Not to Rebuild. After two riveting examinations of the laughably bad Edmonton Oilers and the actually-just-kind-of-OK Carolina Hurricanes, I figured we’d go back to another team that is really, truly, not very good. For this week I figured it’d be appropriate to take a look at the Arizona Coyotes, our favorite desert hockey team (as opposed to the LA Kings, who are no friends of ours here, or the Vegas Golden Knights, who are just sort of bizarre).

The boundaries we’re going to place on this analysis is the 2012-13 season to present, given that in 2011-12 they made it all the way to the Conference Finals, having lost the previous two post-seasons in the first round. So really, not as if they had a ton of sustained success in the first place (their 2009-10 playoff berth was their first since 2001-02) but whatever, playoffs are playoffs (or so I’m told). It’s worth pointing out that things don’t break down as easily in terms of the rebuild lining up with coaching/management changes either, as Dave Tippett was coach from 2009-2017 and Don Maloney was GM from 2007-2016, with the former being replaced by Rick Tocchet and the latter by the infamous Computer Boy, John Chayka. In any event, let’s take a look at their draft history first.

Since the 2012 draft the Coyotes have had 46 draft picks, an average of just under 8 per draft – in other words although in some drafts they’ve had more picks than rounds and in others they’ve had less, they’ve more or less kept things even. In 2012 their first round pick (27th overall) was Henrik Samuelsson, who played 3 NHL games, with the only other NHLer from that draft being Jordan Martinook, he of 64 points in 238 games. Fine, whatever, maybe they didn’t really consider themselves to be rebuilding at that point.

What is more troubling is that after that, between the the 2013 draft and 2014 draft they only had two bona fide NHLers in Max Domi and Christian Dvorak. Domi was probably the best player available at that point, but in 2014 they used their 12th overall on Brandon Perlini, with the next three players taken being Jakub Vrana, Julius Honka, and Dylan Larkin (further down the board in that first round were also David Pastrnak and Josh Ho-Sang).

The 2015 draft was also not great, with the 3rd overall being used to take Dylan Strome, who hasn’t exactly panned out at 2 points in 18 NHL games played, while guys like Mitch Marner, Zach Werenski, Brock Boeser, and Mathew Barzal all going later in the first round. Catherine Silverman, who writes for The Athletic and InGoal Magazine, pointed out to me that the strategy they employed here, picking for organizational need instead of best player available hurt them, with Marner going the very next pick after Strome.

Clayton Keller and Jakob Chychrun were great picks in 2016, and it’s still too early to asses their 2017 picks, but if the Chayka intends on turning this thing around he’s going to need to continue to make strong picks like he did in 2016.

Although the Coyotes seemingly fleeced the Rangers in the Keith Yandle trade at the time, in retrospect things don’t seem as rosy, with Anthony Duclair not really turning into the top-line scoring threat they needed him to be and John Moore eventually winding up a depth defenseman on the Devils. However, since becoming GM Chayka (who was not the GM when Yandle was traded) has made some strong moves on the trade market, with SB Nation’s Coyotes site Five for Howling detailing his history here.

Notable acquisitions of course are the Derek Stepan/Antti Raanta deal, getting Niklas Hjalmarsson for two prospects, and Jason Demers for Jamie McGinn (also a fun tidbit is that the Coyotes acquired Anthony DeAngelo, who they would later trade to the Rangers, for the pick used by Tampa Bay to select Libor Hajek, recently acquired in the McDonagh trade). He’s also got a fairly easy cap situation on his hands, with Derek Stepan being his only real long-term commitment at forward and Jason Demers and Alex Goligoski being his two biggest commitments on defense.

Another strong point for Chayka has been using his extra cap space to take on bad contracts in return for assets, as he did with both Pavel Datsyuk’s contract after he left for the KHL and Chris Pronger’s expiring deal given the his status on IR (both of which have expired at this point). A point of intrigue here is what Chayka ends up doing with Oliver Ekman-Larsson, who is signed through the end of the next season to a $5.5m AAV contract. His deal expires the same year as Hjalmarsson’s (which carries a $4.1m cap hit), but it’s more likely OEL finds himself on another team than Hjalmarsson does I think, as he is certainly due a raise and could prove to be an excellent trade chip for a GM looking to accelerate his rebuild.

I’m not going to speak too much to the coaching situation in Arizona given that I honestly don’t watch them too much and don’t want to speak from a position of ignorance, but I think it’s also a reasonable thing to say that we don’t exactly know whether coaching is the issue for the Coyotes. Their roster, despite Chayka’s improvements upon it, still isn’t great and it’s entirely possible that Tocchet turns out to be a good coach when he’s given the right roster. Of course, great coaches are the ones who can take any roster and make it the right roster, and Tocchet didn’t exactly do too well in his stint with Tampa Bay (his win percentage in 2008-09 was 36.5% and then 48.5 the following year) but maybe Chayka, for all of the analytically minded expertise he brings to the table, can put together a team that Tocchet can make some noise with. Or, he could move on, who knows.

As Catherine Silverman also mentioned to me though, the big coaching issue has less to do with Tocchet and more to do with his predecessor Dave Tippett, who, not unlike AV had an over-reliance on favored veterans, a resistance to shaking things up, and a reputation (in this case “doing so much with so little” in the past) that ran stale. Sticking with Tippett as long as they did, in Silverman’s estimation, delayed things somewhat.

In broad strokes according to Silverman the operative concern for the Coyotes has been patience. Not getting impatient with the rebuild and either trying to accelerate or start over (as a team like Buffalo for example might try to do) has been a positive for them. Instead of being sellers this year they’ve allowed things to work themselves out and are currently on a 100-point pace through 2018. To that end they’ve got a CF% of 50.8 and a GF% of 53.85%, although they do have an underwhelming 48.98 xGF%. Their shooting percentage is a fairly normal 7.76, although their save percentage is an elevated 93.46 – things may cool off a little bit for them but it’s certainly an improvement from their abysmal 46.92 CF% from the start of the season to the end of 2017.

If Chayka makes the right moves (or if they win the draft lottery, as they currently have the best odds at the #1 pick for the generationally talented Rasmus Dahlin at 18%) and keeps with both his patient pace and savvy trades, then the Yotes may be on a solid road to recovery. Indeed, the addition of Dahlin, a slam dunk OEL trade, and the maturation of players like Keller and Chychrun would build an excellent foundation for years to come. Along those lines it’s important to remember that the current Cup favorites out of the East, the Tampa Bay Lightning, drafted Stamkos in 2008 and Hedman in 2009 -it’s taken a while but patience has paid off, and now a decade later they’re looking like they could really do the damn thing (and actually they’ve been contenders for quite a few years now and likely won’t be stopping anytime soon).

So really, although this started out as a cautionary tale of what not to do when rebuilding, it actually turns out that the Arizona Coyotes are not such a bleak image of things after all. Sure, they’ve had plenty of issues that left Chayka a rough team to start with, but things have started to look up under his watch. Bad draft picks seem to have given way to smarter selections, a few clever trades have given them some solid veteran pieces to build around (we miss you, Step), and the continued patient development has put them on the right track.

If they win the draft lottery this year it’s also a solid lesson that being bad while laying the groundwork for the future can pay dividends (not unlike the Toronto Maple Leafs, who restocked the farm while tanking, and then upon selecting Matthews and letting their best prospects simmer came out the gate flying). As much as Chayka is maligned for being a young stats nerd, he’s actually done a pretty great job of rebuilding a team that seemingly wasn’t sure they were even rebuilding up until he came into the picture. I guess what I’m getting at is don’t do what the Coyotes did from 2012 on, but definitely do what they’ve been doing lately, including, yes, tanking all the way.