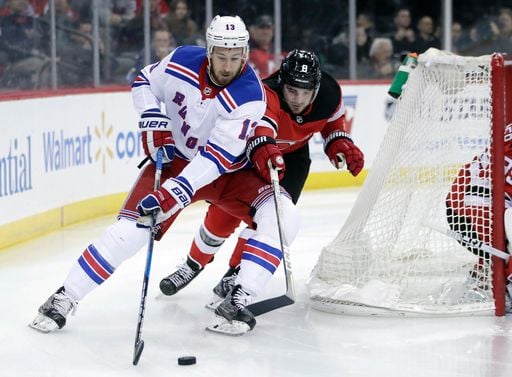 The Rangers, who had no depth at center just two weeks ago, are now flush with center depth. After Mika Zibanejad, they have Kevin Hayes, Ryan Spooner, and Vladislav Namestnikov. Consider, for a moment, that Spooner and Namestnikov replace some combination of David Desharnais, Paul Carey, and Peter Holland, and you the realization of steps made during the trade deadline become apparent.

Hayes has been transitioned by Alain Vigneault from a scoring 3C to a shutdown 2C. It’s a bit of an awkward transition for someone like Hayes, and to be fair we will have trouble assessing his impact defensively because the entire team and system has been a train wreck. That could mean Hayes was as effective as he could be, or that he contributed to the problem. It’s tough to say.

Spooner and Namestnikov are viewed as more offensively inclined players, and less two-way than Hayes. That probably works both for and against them in the long run, but fancy numbers in a short run are a quick ticket to a new contract. Just look at Brendan Smith.

With this potential logjam at center, some critical decisions are going to be needed. Zibanejad is signed long term. Filip Chytil and Lias Andersson are likely going to make next year’s roster. Add in Hayes, Spooner, and Namestnikov, and we can see the conundrum.

First and foremost, a decision is needed on keeping Hayes, Namestnikov, and/or Spooner. Since the latter pair were just acquired via trade, my guess is they will be back next year. The jury is still out on Hayes.

The next question is which players get moved to wing. I’m staunchly against moving a wing to center, as that’s a very difficult move to make (see: St. Louis, Martin, and Miller, JT), but center to wing is an easier move and puts less defensive pressure on the player. While I am fully in the camp of Hayes at center, I don’t really see a risk in moving him or any of these guys to the wing. Spooner has already been playing wing, and for what it’s worth, I believe Andersson has been playing wing in Hartford, and Chytil center.

We could potentially be looking at Zibanejad-Namestnikov-Hayes/Chytil down the middle, with Spooner and Andersson shifting to wing, and one of Hayes/Chytil on wing as well. Of course this could change with a trade.

Center depth went from a glaring weakness to a big strength almost overnight for the Blueshirts. But with every strength comes difficult decisions. With more trades looming, there’s a chance all the points brought up here become moot. Either way, the front office will need to decide what to do with their three RFA centers, and will need decisions by the draft.