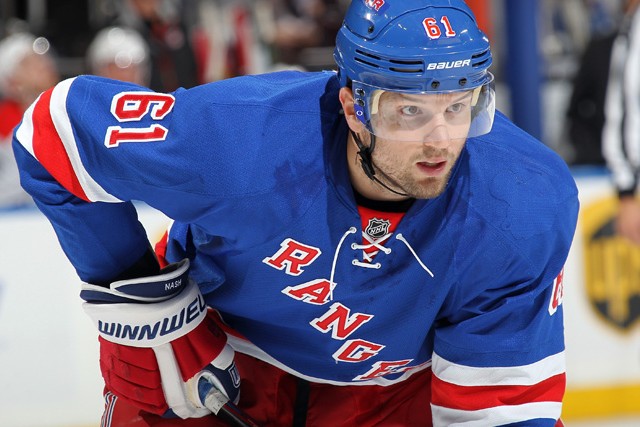 The Rangers sent their biggest pending UFA and perhaps most valuable guaranteed trade asset to the Boston Bruins yesterday morning, culminating a series of rumors that started the night before. The return was a 2018 1st rounder, a 2019 7th rounder, prospect Ryan Lindgren, and forwards Ryan Spooner and Matt Beleskey. As per usual, I have some thoughts.

1. First things first, the Rangers will 100% miss Rick Nash. He may not have been the 50 goal scorer fans had hoped (unrealistically) for, but he was a solid two-way player who consistently put up 25 goals when healthy. A series of concussions derailed him a bit, but when he was fully healed, he was a force on the ice. He drove offense, demanded attention, and opened the ice up for others. His penalty killing was top notch as well. The production may not have warranted $7.8 million, but the play on the ice was that of a top line forward. I thoroughly enjoyed his six years on Broadway.

2. The return for Nash was an absolute haul. The Rangers got that extra first rounder they wanted, which will probably be in the 20-25 range. Ryan Lindgren isn’t a top-top prospect, but is still a solid prospect. We will get to him in a bit. Ryan Spooner was a surprise add to the trade, which is probably why the Rangers got Lindgren and not a better prospect. Matt Beleskey is just a body to make the money work. The 7th rounder is neat. That’s a haul, and a fair trade.

3. When looking at Lindgren on the surface, I understand why folks aren’t overly excited. He doesn’t have a fancy scoring line. He was “only” a second rounder. He isn’t a name brand. He isn’t the top guy in the B’s system. However his tools are there. He’s a good skater, good vision, good gap control, decent puck mover. He’s strong, and already an assistant captain at Minnesota. He is currently getting primarily defensive assignments, which should sound familiar. He’s getting the Brady Skjei treatment. Same school. Same deployment. He may not light the lamp regularly, but he’s going to be fine in his own zone and in the transition game.

4. Spooner was a very surprising get in this deal. He’s putting up a very nice line so far, but he’s also getting sheltered minutes with David Krejci. He’s not the kind of forward who can carry a line. He needs strong wingers –or a strong center if he’s on the wing– to produce. Expecting 60 points or top-six production from his is a fool’s errand. I don’t know enough about Spooner, but my guess is he would slot in nicely as a 3C.

5. The Beleskey inclusion was weird, but also expected I guess. With 50% retained on Beleskey, his cap hit is $1.9 million. If he’s in the minors, it’s a $900k cap hit. That’s not overly terrible. I don’t expect him to have an impact at the NHL level, though.

6. When I first saw the return, I was a little bummed the Rangers didn’t get Frederic or Donato. It sounds like Frederic was the ask with a 1st, but the Bruins countered with Lindgren and Spooner instead of Frederic. That’s how negotiations go. I’m sure the Rangers did their homework on Lindgren.

7. The Blueshirts are in an interesting situation now, with Spooner, JT Miller, and Kevin Hayes all entering restricted free agency. All three play similar roles, so I’m intrigued to see where this goes. Considering the deployment concerns with Spooner, I was wondering if the Blueshirts would be best flipping him for another pick and a prospect, but that doesn’t seem to be the case. Since they are under team control, there is no rush for a trade, if they go that route with any of them.

8. I can understand concern regarding the approach for Jeff Gorton. Of the three trades, he hasn’t acquired any elite level prospects. But these are rentals, and it’s rare an elite level prospect gets traded in that situation. He got a pair of prospects at one level below, and has six picks in the first three rounds in the upcoming draft. With one more day to go, that could increase. So far, he’s done a solid job.

9. Final note on Nash and Michael Grabner: Neither were traded that far away. I’m speculating 100% here, but I wonder if that was done on purpose, as a way to entice them to re-sign in the offseason. I doubt it, but still kind of interesting to note.