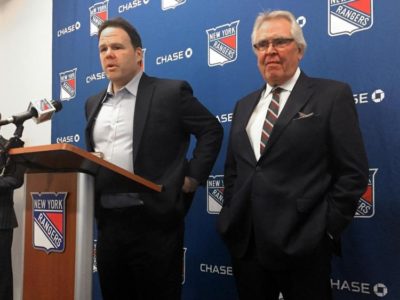 In case you missed it, yesterday saw some significant happenings in Rangerland.  First, the Rangers placed Brendan Smith on waivers and called up Neal Pionk.  Soon after, Jeff Gorton and Glen Sather showed up at practice and issued a joint statement about the future of the franchise.  There was a tepid (re: non-existent) endorsement about AV’s future and much Twitter ink spilled about what it all means.  As you can imagine, I have some thoughts…

1. If you read the memo that the Rangers organization released, a couple of things jump out. First, it seems the organization is trying to gauge fan reaction to the notion of a rebuild.  There is enough qualifying language and vague platitudes in the memo to reverse course if the reaction to the release was pure outrage at abandoning a season where they aren’t completely out of it.

Second, there is a lot of self-back-patting about some of the moves made this summer to begin the long-term replenishment of the organization’s pipe line.  Now, I applaud what the organization is going and appreciate the transparency in their approach.  Lias Andersson and Anthony DeAngelo may end up becoming valuable assets for the organization, but that deal will remain a headscratcher.

Third, they are saying in not so many words “please continue to consume our brand” during this time of transition.  Well, that will depend on how the rebuild is executed, won’t it fellas? I think overall, this was a positive and unique step for the organization to take.  Not only engaging the fans about a significant change in direction for an organization that has been a perennial contender for over a decade, but also a league wide broadcast that the team is open for business. I’m glad to see them try to get out in front of the market.

2. Given his overall point production and reputation as a really nice complimentary player, I don’t know if Mats Zuccarello will fetch enough in a trade to justify moving him.  Depending on the returns at the deadline, it may make sense to evaluate the state of the franchise in the offseason and see how he fits into the long-term plans.  Zuccarello has already taken a sweetheart contract to remain in New York.  Would he take a reasonable extension to provide that veteran leadership to a new core?

3. I think given their performance in Hartford, John Gilmour deserved the call-up more than Pionk.  However, given their respective upsides and general value to the long-term picture of the organization, I think Pionk is the right call. I’d like to see Graves get some time, as well, later in the season.

Yet, we wonder why the NHL is lagging behind other sports.  Hate Gary Bettman?  This created him.  He is a Cornell and NYU educated lawyer who worked for 20 years in the NBA before becoming commissioner.  Are you surprised he runs intellectual laps around guys who maybe graduated high school in Medicine Hat? Now, obviously, I am biased here being a lawyer, myself.  However, I don’t think anyone can make out a logical argument that having a higher education is somehow a deficiency in running a sports franchise.

Think about it. Professional sports are individually, mini-monopolies.  They have a whole different set of economic cause and effect, with collectively bargained market limitations.  The responsibilities here go way beyond understanding the game.  You have to understand the macro-economics of a system unlike any other in this country.  The game is easy by comparison.  You have a scouting department to find quality players and you have analysts to look at aging curves and contract comparables.  To be good at this job, you have to be able to anticipate market movement, manage the salary cap, find inefficiencies in your analysis of on-ice performance, balance a budget, negotiate with player agents (who are usually lawyers) and other GM’s, manage multiple departments filled with people and be the public face of the front office.  While some ex-players do remarkably well in this role (see Yzerman, Steve), does this job description really scream “former player” to you?

Just look at the efficacy in which rebuilding teams succeed in other sports.  In MLB, the Royals, Cubs and Astros embarked on extensive rebuilding efforts under new GM’s, and all three have since won World Series trophies.  How are the Sabres, Senators, Canucks and Avalanche doing?  Same with the Oilers and Coyotes, and though their GM’s have different backgrounds, are still relatively weak candidates given their one-dimensional skill-sets.

6. Now, if you are still reading, you either 1) agree with me, or 2) think I am a sanctimonious ass whom you are readying to tear apart in the comments section, so I might as well go for broke.  Another significant source of frustration I have comes from the fan base.  Those that claim analytics are useless, bemoan the lack of heart, grit, toughness, drive, yada yada yada, and claim that Hank is a negative asset to the organization.  You are wrong. Objectively wrong. You are wrong and willfully ignorant.  This is like still trying to claim that we don’t really know if cigarettes are bad for you.  That ship has sailed, and you just look, at best, like you are clinging to the good old days when the game was the game, or worse, like you don’t know what you are talking about.

If you hate the way hockey has evolved as a game and a business, fine.  Take the position that the game was better/more entertaining/purer/whatever in the 70’s, 80’s and 90’s.  Say that the move toward the speed game and less physicality took away the game’s uniqueness and integrity.  Say that analytics took all the fun out of just watching the games and having a good eye for the sport.  Liken it to music.  I have no idea what the kids these days are listening to.  I’ll still listen to mostly Bruce Springsteen, U2 and David Bowie.  However, I’m not going to complain when Kendrick Lamar, Bruno Mars and SZA (whatever the hell that is) are winning Grammy’s because I know my preferences are outdated.

The game isn’t going to go backwards.  It’s about speed, possession and shot quality.  Analytics aren’t perfect, but they now paint a clear enough picture about what provides success in the macro.  If you don’t want to subscribe to them, understand them or value them, fine.  Just don’t become the “old man screams at cloud” meme.  /rant

7. Back to the Rangers, when asked about AV’s future, Gorton was understandable non-committal.  I agree with this choice here.  Firing AV in the off-season is the right move.  Maybe if you get an influx of NHL-ready talent at the deadline, you could re-evaluate that decision if he isn’t the right voice for the kids who now find themselves on the roster.  The choices for a replacement are much better in the off-season.  I think that the organization is closely monitoring the Quenneville situation in Chicago.

8. I’d be surprised if anyone claimed Smith given the size of his contract, but who knows?  Worst case, let him understand in the minors where is game needs to be and hope he is better prepared for next season.

9. Continuing to beat a dead horse here.  Hank isn’t going anywhere.  He has a full NTC clause and recently stated he is all-in on any direction the organization plans to take.  This tells me that they communicated to him this is what they were thinking, and he bought in.  He isn’t going to leave now and he wouldn’t fetch nearly enough to make a trade worth it given his performance.  Also, for those who claim his cap hit is too high, combine his salary with a ~$1m backup and the financial allocation for goaltenders is consistent with other teams in the league.  The Rangers have the luxury of Benoit Allaire, so their allocation between the two goaltenders can be a little more extreme.

Alright, I’m out of gas for the week, feel free to let me have it in the comments.  It will be interesting to see how this new statement of intent manifests itself in over the next couple weeks.  Hopefully when the calendar turns to March, we will all feel better about the long-term direction of the organization.