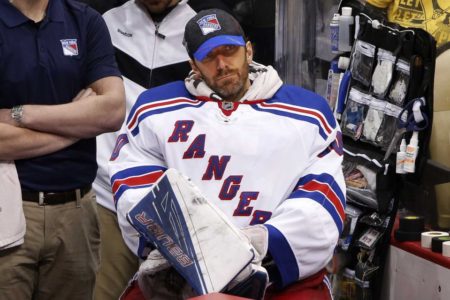 Hate Week continues here at Blue Seat Blogs, and as Dave mentioned yesterday, the Rangers fully deserve it.  They are 2-5 since the bye week.  They are banged up, in part due to their own mismanagement of injured players.  They are running their 35 year-old generational goaltender into the ground in the name of desperation (“every point matters!”), then benching their third-leading scorer in a must-win game.

When this season began, the Rangers started so poorly that most fans and observers believed that they would bounce back.  The Rangers did, and put together an impressive streak that got them into playoff contention.  So who’s to say that this isn’t just another blip on the radar?  I give you the following (apologies for the shameless self-promotion):

They are what they are: not very good.

49 games is a large enough sample to draw some conclusions about a hockey team, so let’s start with the most basic stat of all: wins.  It’s easy to be deluded by the NHL’s current loser point system into thinking a team’s record is better than it actually is.  The hard truth is that the Rangers have lost more games than they have won this season.  The last time the Rangers posted a below-true-.500 record was in 2009-2010, when they lost in a shootout to the Flyers on the final day of the regular season and missed the playoffs.

Of course, judging a team solely by its record is a fool’s errand, given the prevalence of luck and its effect on results in hockey, even across a large sample of games.  That’s why, as much as the haterZ will complain, things like CF% and xGF% are more reliable indicators of future success.  Unfortunately, neither metric gives us reason to believe the Rangers will turn things around this season.

Since the beginning of the 2014-15 season, the Rangers have plummeted in terms of their 5v5 shot attempt share, and this week they finally hit rock bottom: 31st in the NHL in terms of CF%, with a measly 46% of the shot attempts at even-strength.  This is on par with the Arizonas and Buffalos of the world, and it’s quite honestly unacceptable, if not utterly predictable.

For about 6 weeks from November through mid-December, the Rangers were trending upwards in terms of their xGF%.  Knowing that AV’s system and style prioritize quality over quantity, this made sense.  The Rangers steadied the ship somewhat, and were creating lots of quality chances (though giving up plenty as well).  But they were unable to crack the 50% mark, and have started to slide back into the bottom-third of the NHL by this measure as well.

Lastly, the Rangers PDO of 100.74 shows that, 49 games into this season, we shouldn’t expect results to change too much.  There is no shooting regression coming to the rescue like it did in November.  As a matter of fact, it’s possible that things could get worse, if the Rangers goaltending slides back from elite-level to merely excellent.

The 2017-18 Rangers might be the most compelling evidence yet that there needn’t be a debate over analytics vs. the eye test.  The dispirited, disorganized, dysfunctional hockey that we watch nightly is reflected perfectly in the numbers detailed above.  On most nights, the Rangers will lose.  And they deserve to.

The Rangers are who we thought they were, and it doesn’t appear that this current group of coaches, front office staff and players are capable of doing anything to turn around what is starting to look like a lost season.