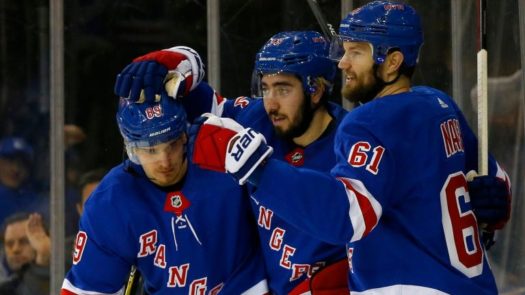 The Rangers badly needed to follow up Tuesday’s win over the Flyers with a solid performance, and bank two more points.  With the bottom-dwelling Sabres in town, the Rangers didn’t disappoint, winning 4-3.  Though the game was a little bit close for comfort, it was another encouraging performance from the Blueshirts, who seem to have bounced back after hitting rock bottom in Pittsburgh.

The Rangers normally rely on a balanced scoring attack, but they’ve found a top line and have started to ride its collective hot hand.  Rick Nash potted two more goals (he now has four in the last two games alone), and Pavel Buchnevich got the game-winner to stave off overtime after the Sabres tied the game 3-3 late in the third.  Let’s take a look at the goals.

Essentially a carbon copy of Nash’s first goal vs. the Flyers on Tuesday.  Buchnevich chipped the puck to center ice, and Nash simply sped past the Buffalo defenseman, then rifled a picture-perfect wrist shot over Robin Lehner’s glove.

Buffalo ties the game with a well-executed power play goal.  Ryan McDonagh and Nick Holden both shaded towards the strong side, leaving Kyle Okposo open at the back door.  Sam Reinhart makes a great pass here, and Okposo just needs to get the shot off quickly before Lundqvist can get set.

Just as a Rangers power play expired, the puck takes a fortunate bounce to JT Miller.  Miller takes his time and fires a bullet off the crossbar and down.  This is fantastic individual execution by JT, and David Desharnais must have been last to touch the puck before Miller gathered it, so he was credited with an assist.

Justin Falk (yes, the one that played for the Rangers, not the other one) scored his first goal in 100 games.  This one came after the expiration of a penalty to Kevin Shattenkirk, so the Rangers actually had three defensemen on the ice.  For this team, that’s never a good thing.  Falk’s shot was on the ice, came through a maze of legs and sticks, and might’ve even deflected at the end.  Really a seeing-eye goal that Lundqvist could do nothing about.

The Rangers came out of the locker room and dominated the third period, finally taking a deserved lead on this goal.  The top line was all over the Sabres, and it was Pavel Buchnevich again creating offense (sensing a theme here?).  His pass led directly to Nick Holden’s point shot, which was tipped on the way in and caromed off the end-boards right to Nash, who slammed it home.  At this point, it felt like there was no way the Rangers weren’t going to win.

Then, Brendan Smith happened.  Smith took an unnecessary delay of game penalty, putting the Sabres on the power play.  Buffalo came into this game with the 31st ranked power play in the NHL, and the Rangers with the 5th ranked penalty kill; the Sabres scored two power play goals.  Go figure.  On this one, Rasmus Ristolainen lets go a big slap shot from the point, which appeared to tick off Mats Zuccarello’s stick and deflect past a helpless Hank.

Rejoice, for our Young Russian Son has come to the rescue!  Buchnevich, who hadn’t scored in 13 games, finally got one, and it couldn’t have come at a better time.  The most impressive thing about this play was how all three forwards were involved in the forecheck, hunting the puck and forcing a turnover in the offensive zone.  Mika Zibanejad’s incredible patience drew Lehner out of his crease, and Buch was there for the tap-in.

The Rangers were solid in the first period, and dominant in the third.  If not for the Sabres being opportunistic on the power play, the score probably would’ve been a bit more lopsided.

This chart shows that the Rangers created more quality chances than the Sabres throughout the course of the game.

The Sabres are a bad team, and the Rangers – even shorthanded due to injuries and struggling as of late – were expected to win this game.  Still, it’s very encouraging that they were able to control play and not rely too heavily on Henrik Lundqvist to steal two points (though he made a jaw-dropping glove save at the end of the game to preserve the lead).  This game was especially important given the four-game west coast trip that lies ahead.