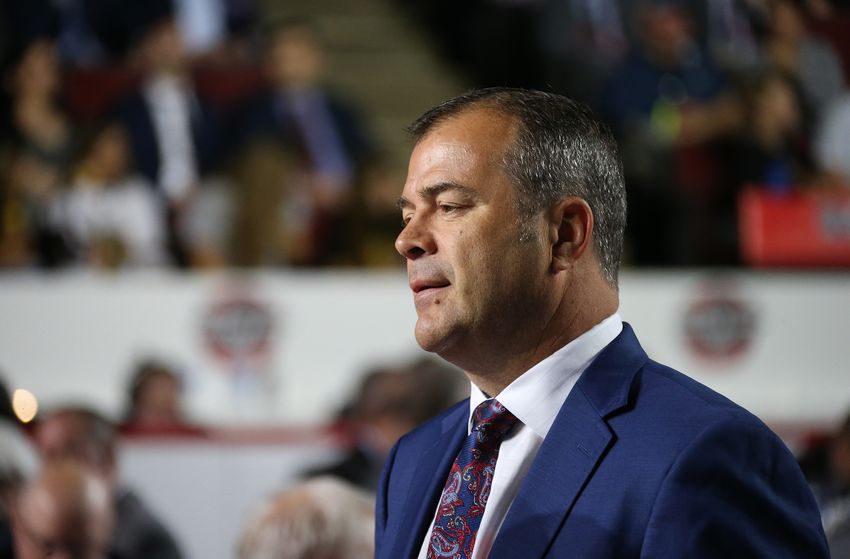 Note: West coast games stink. I was asleep long before the game ended. I figure this post will suffice, given the bizarre roster choices made last night.

The Rangers have hit the midseason point of the year, and have a perfectly timed bye week to celebrate. I say it is perfectly times because it gives us a chance to do all the report cards before the Rangers play another game. Rob did the top-six forwards on Saturday, and it’s my turn to cover coaching.

Scott Arniel – Arniel has had it relatively easy lately. He’s flown under the radar, since the forwards are very good and skilled. He’s been more on the radar of late, as injuries have somewhat crippled the forward depth. The main gripe I have with the way the forwards play is that they are focused on quality shots to a fault. They sometimes pass up on prime chances to get that super-prime chance, and that extra pass doesn’t always work. I wish they’d get more quantity. The powerplay was really clicking for a while, but has slid to 18.8% (17th) due to key injuries to Mika Zibanejad and Chris Kreider. I want to give him a B+, but the PP slide and quantity of shots hurt. Grade: B.

Benoit Allaire – Allaire is a magician, there is no other way of putting it. He doesn’t have to do much with Henrik Lundqvist, but he’s had the difficult job of turning Ondrej Pavelec into a capable backup. So far, he seems to have done the job. Pavelec had a rough start, but has been stellar in the past three games. His .924 SV% likely will dip to something more realistic, but either way, he’s shown he can spell Hank for a night or two. That’s all on Allaire. Grade: A.

Lindy Ruff – Ruff was a weird hire. Many thought he was brought in to put pressure on AV, but that was not the case. Ruff is a bit of a tougher personality, but runs the same hybrid zone/man system in the defensive zone that AV runs. He was brought in because of his similarity with the system. I’m unsure if the pairings fall on him or AV, so I will defer to the boss on those. In terms of system execution, he’s simply not getting enough out of the team. They’ve cut down on backdoor plays, but still hemorrhage quality attempts. This is not a good defensive team. Goaltending is masking their issues, yet again. On the bright side, the penalty kill is significantly better this year (6th in the league). I’ll take that as a win. Grade: C, would’ve been a D if not for the PK success.

Alain Vigneault – Oh boy, where to begin. In the end, all decisions run through AV. Starting with the systems, we all know that it’s his defensive zone system, and we all know the faults by now. The system is great at transitioning to high quality chances for, but they give up so many chances against, the system has basically morphed into “score a ton and hope Hank makes the save.” That is not viable for future success.

The biggest gripe people have seems to be with personnel decisions. I think it would be unfair to judge him based on guys who should or shouldn’t be on the roster, so let’s stick with judging his lineup decisions based on who is currently on the NHL roster. There are two huge flaws here: Pavel Buchnevich and Kevin Shattenkirk.

Buch is a top-six forward, and should be given such ice time. His in-game demotions are infuriating, as are his demotions to the fourth line for weeks at a time. He is third on the team in goals and points, and yet was a healthy scratch last night. I just don’t get it.

Shatty, according to the coach, is a “work in progress.” I get that he isn’t the best in his own end, and that is a legitimate criticism of his game, but tell that to Ken Hitchcock, who got a ton out of the 28-year-old before he was traded to Washington. It’s a coach’s job to get the most out of a player, and calling one of the elite puck movers a “work in progress” is amazingly short-sighted and can be considered shallow.

One of my own personal issues with AV is his lack of consistent accountability. Rookies can’t make mistakes. Offensively minded players can’t make mistakes. But the minute you’re in his Circle Of TrustTM, then you can do no wrong. Just look at Nick Holden. It isn’t too much to ask when we want consistent accountability. It’s part of the job description.

All these criticisms said, AV is still very good at getting offense from his teams. Sure, we want more attempts, but it’s tough to argue when the quality chances keep coming year in and year out. At some point, that isn’t a fluke. For all his faults, AV is still very good at getting his teams to put up goals. The Rangers keep winning, which I find to be fascinating. The process is terrible, but the wins are there. The biggest question is always about how this translates to the playoffs, though.