It’s time to get concerned about Henrik Lundqvist’s workload 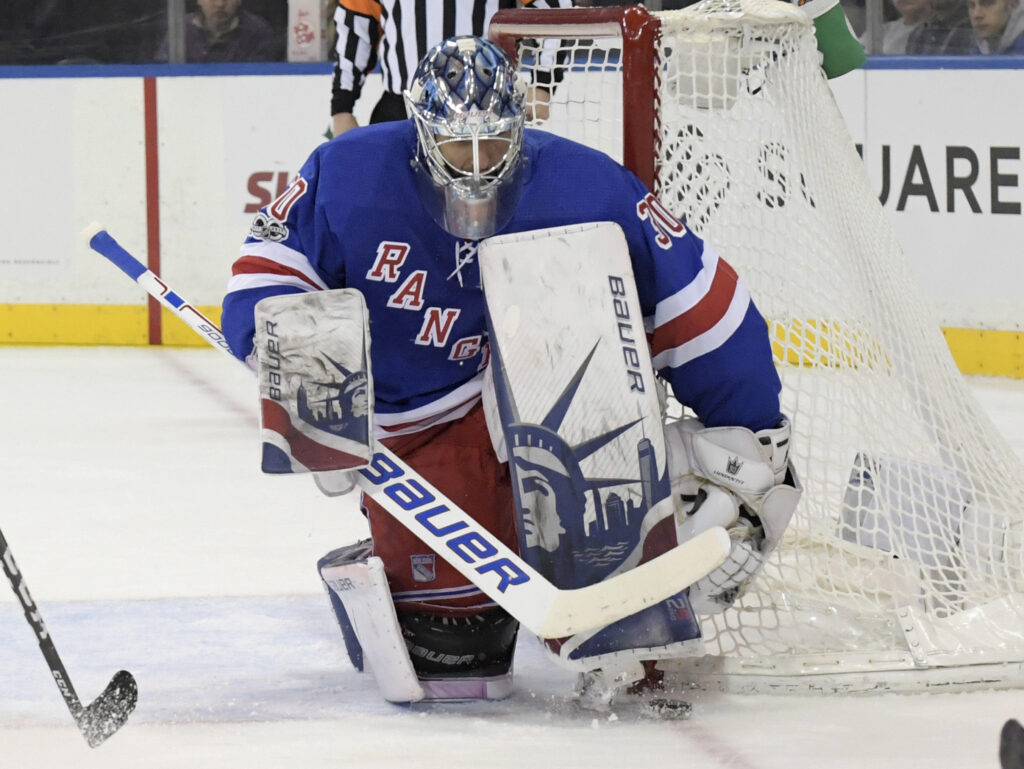 Last night, the Rangers fell in a shootout to the division rival NJ Devils, a game in which they were severely outplayed.  These things happen over the course of an 82-game season, chock it up to a bad performance and move on.  Unfortunately, this game was just another in a string of games that begins to show a developing pattern.  The macro is that the Rangers are surviving, if not thriving at the moment, in the face of all of current analytics than tend to predict success.

The micro is that Henrik Lundqvist is facing a massively heavy workload and is a huge reason why the Rangers are back in the playoff picture.

Returning to the macro for a moment, it might just be that the Rangers high-tempo offense and potent power play are a chemistry that can exist in the holes of the current statistical analysis.  More likely, regression is coming.  The counter-punching style that the Rangers play is a video game offense.  When you don’t have quite the grasp on the controls to sustain pressure and create offense in-zone, you look to turnovers to spring higher probability chances.  With the defense as bad as it has been, this won’t fly in the playoffs when teams are pumping every available resource they have into understanding how to stop, what can be at times, a one-note offense.

That, however, is a big picture problem that is deserving of its own analysis.  The existing statistics should be examined for holes that isn’t accounting for the results the Rangers are getting.  That is not why we are here, though.  We are going to look at the micro today.

So far in December, the Rangers have played ten games.  Lundqvist has started eight of them, which is actually an improvement on November, in which Hank started 11 out of 12, with 12 starts in a row at one point.  The schedule density was a little more forgiving at that point, with typically 2-3 days in between starts, and no back-to-backs.  December has had two sets of back-to-backs with Hank starting both games, both times.

Up to this point, Ondrej Pavelec has started six games.  He is on pace for 14 for the season, which would have Lundqvist playing 68 games.  Hank has not played 68 games in a season since 2010-2011, when he was 28 years old.  As you can imagine, this workload concerns me for the sake of having a high performing goaltender in the spring, which is what this team’s playing style demands.  Hank is going to be 36 in March, which logically lends itself to needing more rest as the season goes on.

The craziest thing is that the games played isn’t really what is that concerning to me.  It’s the in-game workload.  Martin Brodeur played his age 37 season in 2009-2010 and appeared in 77 games.  That is nuts.  However, he averaged 24.49 shots/60.  The in-game workload was manageable, even though the games played number was not.  Through the Rangers’ first 35 games, Lundqvist has averaged 30.35 shots/60 against, with the Rangers sporting the highest xGA in the league.  That is not manageable at the games played rate that Hank is currently sporting.

To illustrate this point with recent history, of the eight starts Hank has made so far in December, he faced at least 30 shots seven times.  He faced over 35 shots five times.  Hell, he faced over 40 three times.  The point that I am trying to make is that this is not a recipe for having a fresh goaltender in the spring.  Lundqvist has insisted that more playing time helps with the mental aspect of the game.  This is completely true.  However, there has to be a balance between the mental and physical if you are going to be relying on him heavily for success.

Since I don’t think the organization is interested in option 1, they need to start to look for a way to get their franchise goaltender off his feet a bit more.  The season is almost half way completed.  The Rangers are back in the thick of the playoff race after their awful start, so if they are hell bent on making a run this year, it would be helpful to have your starting goaltender in one-piece when the playoffs start.