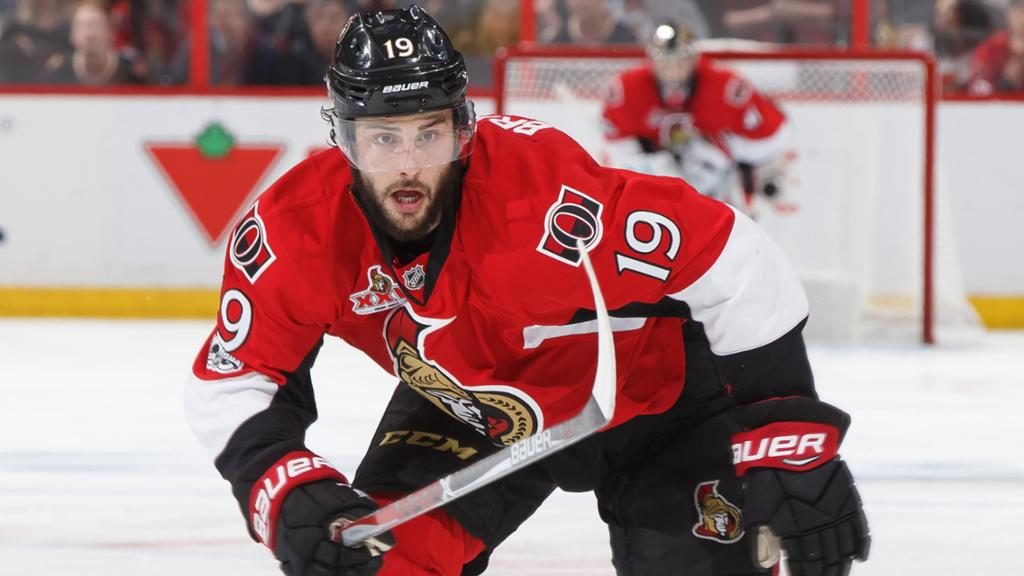 What a difference a year makes. Seven months ago, the Ottawa Senators were in the Conference Final. Now they are out of the playoffs, and according to Bruce Garrioch, looking to retool their entire team. They were a flawed team last year that made a run, and instead of identifying true issues, made short term fixes, thinking they weren’t that far off.

Per Garrioch, the Sens want to make a trade before the holiday freeze, and he mentioned names like Derick Brassard, Mike Hoffman, and Ranger killer Jean-Gabriel Pageau. These are all big names, but how realistic is a trade for one of these guys?

Let’s start with Brassard, because I’m probably going to upset some people (sorry, Becky/Jess). Brassard fills an immediate need, plugging a hole at center. His acquisition would push Kevin Hayes down to the 3C role once Mika Zibanejad returns. He has great chemistry with Mats Zuccarello, and is a beloved Ranger. He would certainly check a lot of boxes.

But I likely lean towards passing on Brassard right now. It has nothing to do with Brassard the player. It has to do with another year on his contract (at $5 million). If the future of the club is truly some combination of Zibanejad, Hayes, Chytil, Andersson, and Nieves down the middle, then throwing Brassard in the mix might keep one of the 2017 first rounders out of the lineup.

Another concern: Brass is 30 years old now, and the Rangers would only be getting a year and a half of his services before he hits 32 years old. He likely would continue his steady production through the end of the contract, but it’s likely the Rangers cut bait after that. The good news is that given his contract, he might not cost a body off the roster, aside from some cap balancing.

Brassard, to me, is more of an emotional pickup, but he does check a lot of boxes that help the team this year. I am not opposed to landing him in the right deal. I think he’d be a great pickup for this year. It’s the following year that concerns me, although it is a good problem to have too many options.

I think I just talked myself into wanting Brassard. That said, Brassard appears to be one of the few that was not asked to submit his no-trade teams.

Hoffman is the guy I’d want out of Ottawa. He may not fill the center hole this year, but he fills the winger hole created next year with the expiry of the Rick Nash and Michael Grabner contracts. The goals from both will need to be replaced, and Hoffman is the guy who can do that. He’s signed to a reasonable deal, with two years and $5.2 million (I’m rounding up) left after this season.

Hoffman hovers between 25-30 goals each year, and would likely see a boost with the offense-driven Rangers. He just turned 28 years old and is signed through his age-30 season, which is when you expect him to start declining. The Blueshirts would be getting two and a half years of 25-30 goals, with the two full years coming at a time when they need more scoring.

With Hoffman, the issue is going to be cost. He’s a prime name and will likely cost more than Brassard. He likely costs at least one roster player. Timing might also be an issue, as Hoffman may make more sense as an offseason acquisition, given the current makeup of the Rangers roster.

Pageau’s name brings nightmares to our ears, the four-goal game last May still fresh in our minds. That said, Pageau is a relatively cheap center, with two years after this season remaining at $3.1 million. The 25-year-old center again fills a need this year, but beyond that his role would be uncertain.

Unlike Brassard, who would fill in as a 2C or 3C, depending on how Alain Vigneault wants to bring along the kids next year, Pageau is best suited as a 3C who can punch above his weight class in a pinch. Pageau has never cracked 20 goals or 45 points. He’s seen a decline in goals and points in each year since his breakout season two years ago. He’s on pace for just 35 points this season.

I honestly don’t like the idea of trading for Pageau, but his trade cost would be less than both Brassard and Hoffman. Plus he’s young. If you’re trading for him, he’s a Kevin Hayes replacement. Both are the same age, but Hayes is due a raise on his $2.6 million contract this summer. Pageau produces less than Hayes (Hayes has a pair of 45 point seasons), but has similar possession numbers.

I can see this making sense if the Rangers move Hayes in a larger deal, and then replace him with Pageau. That said, it wouldn’t make much sense to acquire a Hayes replacement with both Andersson and Chytil on the way. You can at least argue that Brassard would fill a top-six role to ensure the kids don’t get thrown to the wolves. That argument doesn’t exist for Pageau. He’s a hard pass for me.

Oh boy, where to begin? Apparently Karlsson is on the block. He’s been asked to submit his no-trade teams, and he’s been vocal that he will “get what he’s worth” in a contract extension. Ottawa ownership was none too pleased with that remark. All signs point to a divorce in Ottawa.

Karlsson is a generational talent on the blue line. He would completely change how the blue line looks in New York. He would be an immediate upgrade on every single blue liner. At 27 years old, he has another year at $6.5 million on his deal before he likely cashes in on a long-term deal worth at least $8.5 million a season. The player cost to acquire him would be astronomical, as Chris pointed out on Twitter.

Skjei and Mats are 17 GAR right now vs. 13 for Karlsson but its a possibility. pic.twitter.com/BqaJFIBOwZ

Expect any trade to begin with either Brady Skjei or Ryan McDonagh, plus a ton. My guess is that it would be McDonagh, just for salary cap purposes. One of Chris’ scenarios is Skjei and Zuccarello for Karlsson, and in all fairness the Rangers might need to add a piece.

Without breaking down every scenario –reach out to Chris on Twitter if you have more questions– it looks like Karlsson is going to require a relative gutting of the roster. I’d stay away, but I’m probably in the minority.