Thoughts before the Caps game tonight 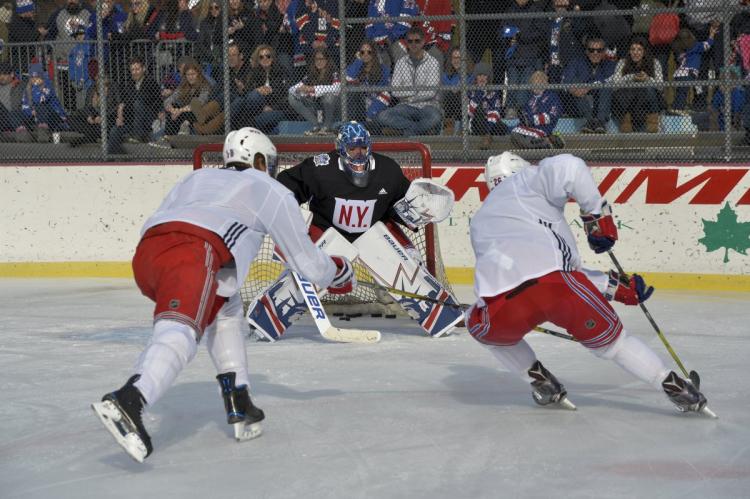 It’s been a bit of a slow week in Rangerland.  Credit only having two games since I last posted, I suppose.  The Blueshirts take on the Caps tonight, in the wake of Barry Trotz’ completely unnecessary criticism of Kevin Shattenkirk; the Rangers should have some motivation to make him eat his words.  In any event, I have some thoughts…

1. The Rangers have gone 7-3-0 in their past ten games and they are still sixth (!) in the Metro.  It just goes to show what a meat grinder this division is.  The five teams ahead of them are separated by a single point. A single point. At least the Rangers have games in hand on everyone but the Devils, who are still inexplicably sitting atop the pile.  The Rangers also have the second-best goal differential in the division, so hopefully regression will hit some of those other clubs a bit harder in the coming weeks.

2. I don’t feel the need to address Barry Trotz’ comments on Shattenkirk, however, I can’t just ignore it either.  So, I will say this.  It was silly.  There was no reason for it, but it also wasn’t overly offensive.  Just an unneeded analysis with sprinkled with criticism and hypocrisy.  Nothing new in today’s NHL.  Moving on…

3. I saw some interesting reactions to the potential concept of a McDonagh trade.  I don’t advocate for trading McDonagh, but when you take into account that we have seen some drop off from peak McDonagh of a few years ago, contending teams’ desperation for top four d-men and the fact that he will be over thirty when his current contract expires, it would be irresponsible to not see if you could extract massive value.  Probably won’t happen, but you can’t stick your head in the sand, either.

4. All of you heaping praise onto Boo Nieves are correct.  That is all.

5. This probably warrants a full post on it’s own, but I have been noticing the visual differences between Pavelec’s style of play versus Hank’s.  There aren’t many truly “athletic” goaltenders left in the NHL, but Pav is a holdout and it is a completely different visual than Hank.  The sequence at the end of the Penguins’ game, when he made a couple of big saves in the waning seconds really stood out.  If everyone is interested, I could write that up.

5. For what it’s worth, I really like the Winter Classic jersey.  It’s simple and true to the Rangers’ style.  That said, I think the crest with the N.Y. in it would be the nicest logo they have had in a while.  Simple, minimalist.  Really nice looking.

6. Gary Bettman really can’t wonder why everyone hates him at this point.  What I will give him is that he is a shrewd business man.  I get why the owners trust him implicitly to routinely gouge the players at the bargaining table.  He is going to pull off a clean $650 million for a new Seattle franchise and it won’t affect the salary cap one bit.  The cap should be well over $90 million based on the initial inflation projection.  It is only where it is because the players keep agreeing to give up more salary to move the needle 5% every year.  I get the Canadian dollar has been stagnant, but all this expansion stuff the past few years has highlighted how badly the NHLPA got bent over the table the last time around (and the time before that, and the time before that…)

7. After a pretty leisurely schedule, the Rangers now face six games in nine nights, with the first two against teams ahead of them in the division.  It’s a bit of a meat grinder with the Sens and Bruins providing the only respite.  I’m sure Pavelec will get some time, but the Rangers really need to pick up some points during this stretch.

Alright, that’s it for me this week.  Everyone enjoy the game tonight and the rest of the weekend!