The Rangers’ options in the wake of the Zibanejad injury 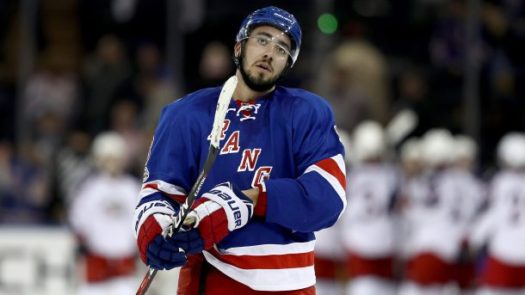 There is no way around it; Mika Zibanejad going down with a concussion is about the worst case scenario for the Rangers short of losing Henrik Lundqvist (especially on a senseless, late hit like that).  With already severely compromised center depth, both the short and potential long-term blow to the lineup is massive.  When the season started there were serious concerns about the lack of qualified replacements for Derek Stepan and Oscar Lindberg.  The Blueshirts were left with a ragtag group in the bottom six, and now their depth will be tested even further.

Concussions are a tricky injury to begin with.  There is a significant scientific gap between diagnosis, treatment and prognosis.  Many times doctors just don’t know.  This makes it very difficult to determine the proper course of action from a roster construction standpoint.  If Zibanejad is out for a week, the Rangers can probably weather that storm.  If he is out for three months, the organization will need to do a real evaluation about whether they can contend without him.

The team swung a minor trade with Montreal for former Maple Leaf Peter Holland.  Holland has been in the AHL all season, and we have no indication if his acquisition is designed to cover the lost depth in Hartford from a call up, or whether the org considers him a legitimate option for the bottom six (he could be an upgrade on Paul Carey).

1. Make David Desharnais the new 1C and keep everyone else where they are.

I can’t believe I even wrote that sentence, but this is a move I could certainly see AV making, at least in the short term.  Desharnais showed solid chemistry with Chris Kreider and Pavel Buchnevich and has veteran presents.  This would allow everyone else to stay status quo (with Hayes as 2C, Nieves at 3C and Holland/Carey as 4C).

2. Move everyone up a rung and call up a new 4th line center.

This could be Peter Holland or Steven Fogarty.  It could be moving Paul Carey back to his natural center ice position.  Hell, the organization could even reward Vinni Lettieri for this strong start.  So, in this scenario, we would have a Hayes/Desharnais/Nieves/new 4C down the middle.  Still gross.

3. Move JT Miller to center and have him slot in behind Hayes.

I’d be very surprised if AV was comfortable with this scenario.  He has never really looked at Miller has a legit center option.  However, this one keeps the depth most in-tact.  It would see Hayes/Miller/Desharnais/Nieves or some combination thereof as the four pivots.  There would still be some skill issues on the wing, but with the versatility of Fast and Grabner, the Rangers would probably be alright.  Miller would likely have to be sheltered defensively, but I think I may like this option the best.

4. Call up Filip Chytil and play him in the top 6.

After stumbling a bit during his early season audition, Chytil has found his footing at the AHL level, putting up 12 points in 13 games.  From all of our scouting resources, the indication is that he is dominating the level (which is exactly what you are looking for from a top prospect looking for a call up).

This would allow JT Miller to stay at the wing and the bottom six options to stay in the bottom six.  Hayes/Chytil/Desharnais/Nieves doesn’t look half bad, but I have some concerns.

First, you don’t want to rush a top prospect back to The Show just because of injury.  He should be called up when he is ready to be called up.  There did not see to be any rush to bring him back prior to the Zibanejad injury.  In fact, the general tenor was that the organization was pleased with his progress at the AHL level and wanted him to continue doing what he is doing.

Second, I don’t really have much confidence that AV will play Chytil in the top 6.  I could see him piecing together option 1 and option 4 and burying Chytil in sheltered minutes.  He may produce there, but I feel like if you are going to interrupt his progress in the AHL, it should be for meaningful minutes to re-acclimate to the level.

Now, I wouldn’t begin to forecast potential options in this space, considering this just happened.  However, the team has been (or should have been) on the hunt for a center upgrade for most of the season.  It’s never a good look to desperately overpay, but should the front office find a reasonable deal to add some depth, it was a good idea before the injury and certainly is now.

Those are really the options as I see them.  There is no question, these are bad options. The loss of Zibanejad for an extended period of time could be a serious blow to the momentum the team has been riding over the past few weeks. What do you all think the best road for the team to take is?  Did I miss any possibilities? Sound off in the comments below.