Will Kevin Hayes force a rethink in the Rangers plans? 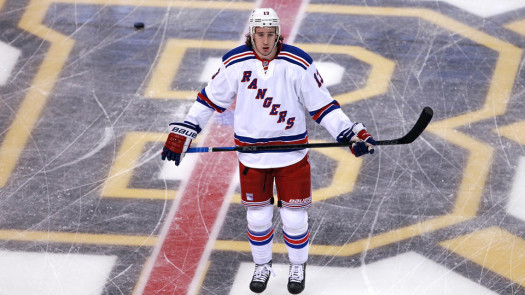 Kevin Hayes will never be a Selke winner. We also know that chances are he’ll never be a top line franchise center. He’s somewhere in between. Hayes has however, proven to be a reliable middle six center who has a strong offensive skill set.

What we are starting to see from Hayes however is that he can be trusted to be used in a defensive role, even if it doesn’t play to his full strengths – at worst he’s not a liability in such a role. The key has to be usage, and not just for Hayes. The Rangers cannot use Hayes as a pure match-up center and the intention should surely be to have three centers who can be trusted at both ends of the ice.

Hayes is probably never going to be a 60+ point guy given the way he is being utilised however, providing Alain Vigneault can utilise his big center properly, Hayes can cause a re-think in the Rangers mid to long term strategy at center. (asterisk attached to this entire piece: can we trust AV to use him properly?).

Full disclosure: I have long been an advocate of the Rangers trading Hayes at some point. I believe that efficient asset management can help negate the absence of lottery draft picks and allow a team to continually evolve while contending. Hayes has brand recognition, a solid body of work as a Ranger, has all the tools to be better than he actually is and has/is somewhat cost controlled. I truly believe the Rangers can get more for him than he will be worth (to them) on his next contract. With that said, Hayes is a fine player and if he stays in NYC then he can be a part of an intriguing center group in New York.

Hayes was excellent against the Oilers Saturday afternoon. Not just for the chances he created but he kept the McDavid line in check and (for those, so inclined) posted an excellent Corsi of 68%. None too shabby against the league’s most dynamic player. Was his performance against McDavid the exception or the eventual norm?

Hayes doesn’t have outstanding Corsi numbers generally speaking, but he also had a strong showing against Tampa Bay as well; arguably the best team in the league offensively. So Hayes is showing he can play against other teams best players and survive. So what does that mean for his long term usage and future in New York?

The next few weeks and months could be telling for the Rangers at the center position. If Hayes emerges as a reliable match-up center it means they can take another look (when deemed ready) at Filip Chytil in an appropriate position: in an offensive, top six role with appropriate offensive zone starts.

It also means there is even less pressure to rush Lias Andersson back to North America at the first opportunity. If he needs to stay in Sweden for an extended period of time it will be a lot more palatable should the Rangers have three solid centers they trust, already in New York. Hayes’ development also allows the Rangers to look for a different kind of center if/when looking to add forward depth should the team remain in the playoff hunt.

The more you think about Hayes and his current role on the Rangers, the more significant his season appears. Hayes influences the team’s behaviour at the deadline, he influences his own long term future (obviously), he has a significant and direct impact on how the Rangers handle their most important two prospects (arguably their most important prospects in a generation) and his own performance obviously has a direct impact on his line mates. Thrown in the fact that, thanks to Hayes, the Rangers eventually feel more comfortable at center that they can stop double shifting Mika Zibanejad and in Hayes, you have a player that is impacting the club in a multitude of ways.

Individually Kevin Hayes is a solid Ranger but the Rangers remain a work in progress at center; the situation at present is one injury away from disaster as there is simply no depth. How Hayes progresses over the next few weeks and months will teach us so much more about the team’s ability to compete this year and their future at the center position beyond 2018.