Views from the Chase Bridge for a six game winning streak 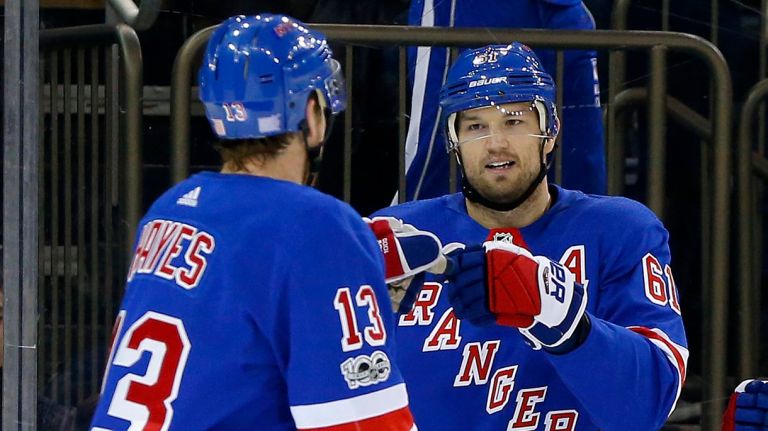 I was lucky enough to sit in the Chase Bridge seats for yesterday’s game. The second best seats I’ve ever had (sat on the glass once). It was a great view to see the game unfold and continue the six game winning streak. Since I was at the game, no goal breakdown, but I had some observations.

1. Three goals, three cross-ice (Royal Road) passes. That’s how you win games. All three were beautiful passes. All Pavel Buchnevich and Rick Nash (on the first one) had to do was not miss. But on that second Nash goal, don’t discount the finish. That was a very difficult goal to score.

2. I don’t understand why Marc Staal and Steven Kampfer are continually out on the ice. It’s mind boggling to me. They just aren’t a good defense pairing. I understand that Brendan Smith will eventually replace Kampfer, so at this point I’m just waiting. Each game that it takes, though, is frustrating.

3. Nick Holden had a surprisingly good game. I thought he was spending a lot of time in the offensive zone, and it turns out I was right.

A blip, probably. But I’ll take it.

Did McDavid just mock Sam Rosen in that celebration with saying "It's A Power Play Goal" in the group hug?

.@WeBleedBlueNYC caught this one, McDavid says "It's a power play goal" after scoring pic.twitter.com/ZP2TvT6kXt

5.Jimmy Vesey apparently had his tooth stuck in his lip after taking that brutal boot to the face. He got his mask, and continued playing. Hockey.

6. Remember how we all used to say “forfeit the two minutes” whenever there would be a Rangers powerplay? Not anymore. It’s amazing how the addition of one player can change things. Kevin Shattenkirk’s least appreciated ability is getting pucks through to the net. Think about it, how often do you see his shots going into shin pads? His ability to get the puck through forces them to respect the shot, which opens up the pass to Mika Zibanejad in the Ovi spot. Respecting Zibanejad there opens up the cross-ice passes mentioned above. It’s a beauty to watch.

7. If you ever get the chance, watch a game from the Chase Bridge. What a view.