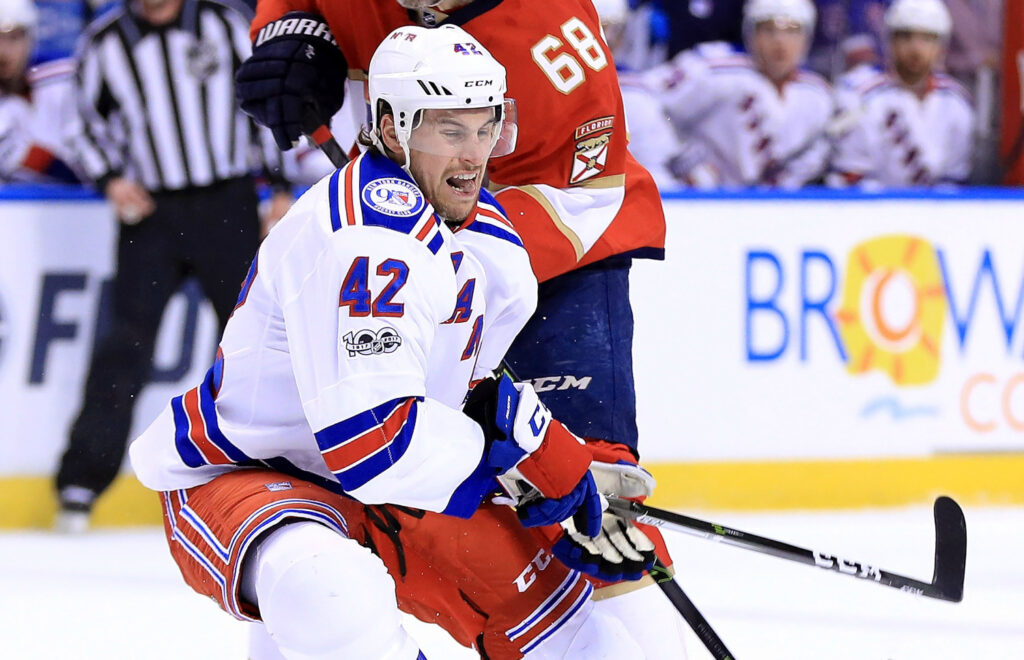 Note: Big welcome to Chris (@yolo_pinyato), the newest writer at BSB. Chris has put together some phenomenal work at HockeyGraphs, and has present at the RIT Hockey Analytics Conference. We are all stoked to have him on board. Give him a follow on Twitter and check out his work, it’s great stuff.

With the Rangers season already perilously close to teetering off the edge of contention, I wanted to take a quick look at the Ranger’s big offseason acquisition, Kevin Shattenkirk.

First a quick breakdown of the data:

When looking at Shattenkirk’s shot impacts last year at 5v5, we can see that relative to competition, he was by far the best player of the Rangers’ current set of defensemen. The shot impacts are weighted meaning that if two players had the same Corsi For% but different levels of competition, the player with the stronger competition would be higher on the y-axis. 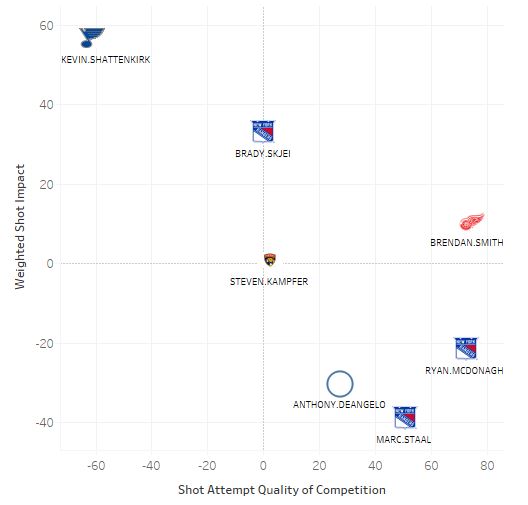 Net Shots for Relative to Competition

Nevertheless, it must be noted that Shattenkirk faced a much softer slate of opponent lineups last year than a true #1 like Ryan McDonagh did, and is by no means a traditional #1 shutdown d-man.

However, while knowing whether or not someone is an effective defender is important, but understanding what makes them effective is equally critical. I recently presented at the RIT Hockey Analytics Conference on my attempts to look at the skill sets that contribute to widely accepted stats such as Corsi For % and Game Score.

Here’s a quick breakdown for reference (year over year repeatability is in parenthesis):

When we breakdown Shattenkirk’s game, we see that while he is above average in most areas, he pales in comparison to both McDonagh and Skjei in most every area except for his passing.

Looking at how Shattenkirk meshed with his defensive partners last year in Washington and St. Louis, his best performances were with Robert Bortuzzo and Brooks Orpik. While no one would mistake either of those two for Norris caliber players, they did supplement the weaker areas of Shattenkirk’s skillset, specifically Bortuzzo’s transition skill and Orpik’s two-way play.

Combined ratings of each d-pairing

Fortunately for the Rangers, a player who combines the best of both Bortuzzo’s and Orpik’s already exists on the roster: Brendan Smith.

According to corsica.hockey, the Smith-Shattenkirk pairing has only shared the ice for 2 minutes so far, but with the Rangers defensive pairings in constant flux, it’s an option AV should take a long hard look at.

The season has not started out as expected, but there is still some hope that Shattenkirk can rediscover some of the magic that made him such a desired asset in the first place.